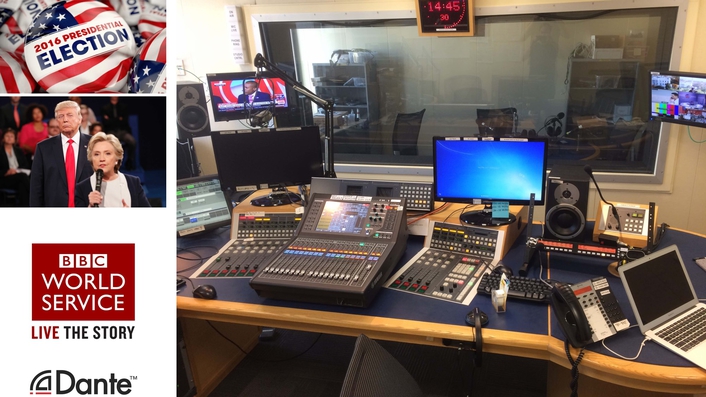 In a clear sign of the shift to digital, the use of Dante by the BBC World Service contrasted with their use of a legacy contribution and distribution architecture for live US presidential election coverage four years ago. The transition to audio-over-IP using Audinate’s Dante networking technology massively improved efficiency across all business and technical aspects.

“It’s a big difference when you remove the labor of running hundreds of copper analog audio circuits,” said Matthew Page, engineering manager, BBC. “Four years ago, we had three broadcast studios sharing contribution sources, all connected by copper multicores, analog talkbacks and analog audio routers to switch mix-minus feeds. That was a lot of equipment and heavy cable, all of which had to be connected on site. This year, we configured most of the equipment in London, then connected it on site with readily available and inexpensive network cabling. We saved hundreds of hours of rigging and testing on location, and thousands of British Pounds overall. It was lightweight enough to mostly carry on the plane, which reduced our shipping costs by 80 percent.”

The complete system featured 17 Dante-enabled devices including 128x128 intercom/IFB, AES & analog I/O and broadcast mixing consoles, all enabling the distributed routing of hundreds of circuits with built-in redundancy for immediate failover to a secondary network.

Inside the facility, the Dante network supported connectivity between the temporary studio in the basement-level conference room, and smaller studios in the main bureau on the eighth floor. Dante was also used to route over thirty incoming contribution feeds, with associated mix-minus, from various IP and ISDN codecs. The AoIP network provided further efficiency, allowing simple off-the-shelf fiber Ethernet connectivity between the nine floors to be used.

The flexibility of the Dante network proved to be especially useful for communications across the bureau and election coverage production.

“Once the core infrastructure is in place, it’s very easy to scale. Adding a new studio with access to all the same sources is almost as easy as plugging a few extra network cables between an Ethernet switch and another Dante-enabled mixer and intercom panel,” said Page. “We had Dante connectivity between our talkback panels in the temporary facility, and our intercom matrix in the main bureau. Dante’s connectivity allowed us to place the talkback panels wherever we wanted, which simplified communication between production staff and all contribution circuits, presenters and guests.”

Dante’s very low latency provided an additional benefit to presenters and guests, allowing each to listen to any live feed available on the audio network on headphones in one ear and studio output in the other without any program delay.

About Audinate
Audinate revolutionizes A/V systems to enable our customers to thrive in a networked world. Audinate’s Dante media networking technology has been adopted by the leading OEM manufacturers and the dominant networking technology in the professional audio/visual industry. Dante is used extensively for live performance events, commercial installation, broadcast, recording and production, and communications systems. Audinate offices are located in US, United Kingdom and Australia.