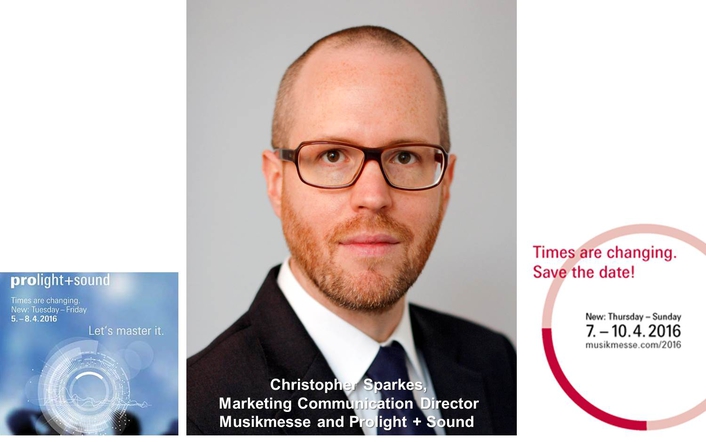 Christopher Sparkes (40) has been appointed Director of Marketing Communication for Musikmesse and Prolight + Sound with effect from 1 November 2015. Thus, he is responsible for the conceptual and strategic development of the marketing-communication activities for the fair, and the worldwide activities in the Entertainment, Media & Creation Business Unit of Messe Frankfurt. In his new position, Christopher Sparkes reports to Stephan Kurzawski, Member of the Extended Board of Management and Vice President Entertainment, Media & Creation of Messe Frankfurt Exhibition GmbH.

Sparkes joined Messe Frankfurt as Media Relations Officer for the Ambiente, Tendence and Nordstil consumer-goods fairs in 2011. Previously, he worked in PR and marketing for the ‘Künstlerhaus Mousonturm’ artistic centre in Frankfurt am Main. From his time there and his freelance work, he brought extensive experience in the fields of culture, music and entertainment with him to Messe Frankfurt. He studied English language and literature, pedagogy and pedagogical psychology at the Goethe University in Frankfurt am Main.

Christopher Sparkes succeeds Julia Krell who had assumed responsibility for the marketing communication activities of Musikmesse and Prolight + Sound in addition to her communication responsibilities in the Consumer Goods & Leisure Business Unit. From 1 November, she will be able to devote her full attention to the Christmasworld, Paperworld and Creativeworld trade-fair brands as Head of Marketing Communication.

Background information on Messe Frankfurt
Messe Frankfurt is one of the world’s leading trade fair organisers, generating around €554 million in sales and employing 2,130 people. The Messe Frankfurt Group has a global network of 29 subsidiaries and 57 international Sales Partners, allowing it to serve its customers on location in more than 160 countries. Messe Frankfurt events take place at more than 30 locations around the globe. In 2014, Messe Frankfurt organised a total of 121 trade fairs, of which more than half took place outside Germany.
Comprising an area of 592,127 square metres, Messe Frankfurt’s exhibition grounds are home to ten exhibition halls. The company also operates two congress centres. The historic Festhalle, one of the most popular venues in Germany, plays host to events of all kinds. Messe Frankfurt is publicly owned, with the City of Frankfurt holding 60 percent and the State of Hesse 40 percent.