Charbonneau of Le Mobile Puts DirectOut to the Ultimate Test 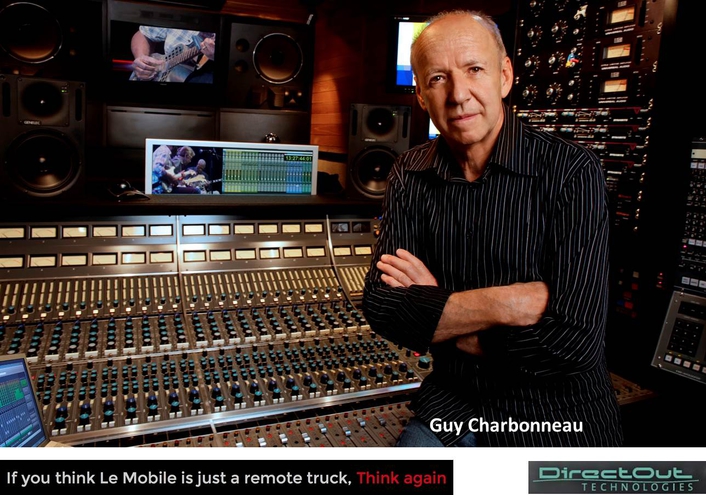 “With 96k the signal is far cleaner and quieter than when I’d have to run a 500 or 600-foot analog snake.” Guy Charbonneau

What does it take to satisfy the latest needs of a veteran sound engineer who has spent more than 40 years recording many of the world’s top artists live?  The answer is this: the ANDIAMO.MC, its converters and its insanely fast, exceptionally reliable, and highly scalable router (M.1K2) coupled with the outstanding support of the DirectOut team.

Guy Charbonneau needed a system that would allow him to switch between multiple artists while recording live. In short, he needed to store and recall the preset for each performer in a way that would make it fast and easy to switch between the two. He approached DirectOut about making some modifications to their ANDIAMO.MC Remote. Although the evolution of this process has been covered in detail in an interview to be published soon, here we address some critical technical aspects.

Charbonneau’s requirements are complex. The live recording environment is as sensitive as it is fluid. He knew that in order to create the system that he had envisioned, he would need the ultimate in reliability, scalability, and speed. DirectOut’s signal chain and the M.1K2 became key components in creating a truly customized system that could handle multiple, complex challenges with a high degree of fidelity, and sophistication.

After taking a good look at the M.1K2, which Charbonneau asserts is “a highly sophisticated router,” he decided to repackage his entire system by adding to the stage rack three MC preamps and one ANDIAMO 2 AD/DA MADI converter. 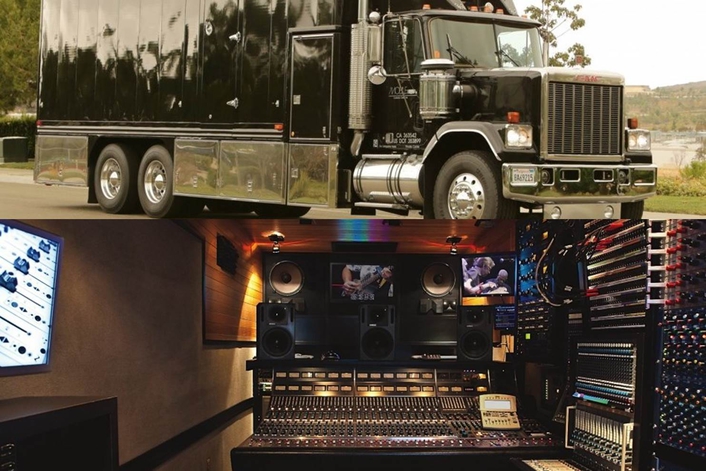 The M.1K2 soon became the heart of the system because it allowed him to set up and remotely control the MC preamp, use multi-mode or single mode fiber, and (in some cases) receive a MADI feed from an external source and route it to Le Mobile. And so, by using the MC preamp at a high resolution (96k) and a MADI feed to three ANDIAMO 2 DA converters and one ANDIAMO 2 AD/DA converters on the Le Mobile rack and then feeding the analog signal to the NEVE microphone input through custom made circuitry to match the gain and impedance as though using a copper audio snake, it became a highly efficient and complete system.

In Charbonneau’s words “This effectively allowed us to keep the ‘sweet’ sound of the Neve Preamp while giving us a signal that is much cleaner than if we were to use the long audio copper snake. Of course, for shorter distances (from stage to truck), we still have the option of using the analog audio snake.”

“Times have changed, and we have had to adapt. In the past we could park 125 feet from the stage, but this is no longer the case. Now we are more like 500 or 600 feet away, sometimes even farther. With 96k the signal is far cleaner and quieter than when I’d have to run a 500 or 600-foot analog snake. And so, ultimately, we can reach our goal of a superior recording with great efficiency and ease in spite of the distance.”

For more than 40 years Guy Charbonneau has recorded and mixed projects for an exceptionally wide range of talent within the music, television and motion-picture industries. His passion for recording live music remains unparalleled and fuels his drive for capturing a clear, pristine, authentic sound every time. And it is this approach, or attention to detail that has really allowed him to remain as one of pro-audio’s foremost sound engineers on the scene today. “I believe that our ability to interpret many diverse types of music while consistently capturing the true ambience of a live event makes Le Mobile a unique and invaluable asset to any recording project” says Charbonneau who then looks straight at me while adding: “You know, there is this integrity of sound that I am always going for and trying to preserve…its very hard to explain, but in the end I recognize it when I’ve been able to achieve it…but it is also this feeling that I have of always wanting to capture the artist in the best possible way, in the very purest form and this makes me approach every project as if it is the most important one in the world…because at that moment it really is.”

In recognition of his long and prestigious career in live remote recordings, production and mixing, numerous industry awards have followed. Among these are: Mix magazine’s highly coveted TEC/Technical Excellence & Creativity Award in the category of Outstanding Institutional Achievement for Remote Location Recording Engineer, an Emmy® at the 52nd Annual Creative Arts Awards, and close to 50 gold and platinum records to name just a few. But what also makes Charbonneau unique is his perspective which is vast and spans more than four decades. And when you combine this with a remote recording studio that is pioneering on the technology front, you get a legendary product. When asked about this he just laughed and said: “Well, given the complexity of today’s multimedia projects, I have to say that I am a strong believer in a team approach because a solid team is what it often takes to make things come together and flow smoothly and in the way that they should. But I do think with our decades of experience in recording and mixing live events from around the world — which by the way has included the music for many feature films as well with large orchestras– we really do understand something about what it takes to plan, execute and post-produce virtually any type of audio or video event in a way that completely honors the artists and the project. And in fact, I think we are extremely well positioned to do this because we have numerous options we can use starting with our exceptionally equipped truck, or our state-of-the-art fully customizable portable systems…so in the end its all about the music and it is win win.”

DirectOut GmbH was founded in 2008 by a team of professional sound engineers headed up by Stephan Flock, an award-winning classical music sound engineer with over 20 years’ experience in digital audio signal processing design. The company specializes in developing essential pro audio connectivity, networking and bridging solutions for broadcast, studio, live and installed sound applications. Unique in that all members of the DirectOut development team are still active professional sound engineers, the company is thus fully focused on real-world demands and problem solving. The product range, marketed under the brand of DirectOut Technologies®, offers solutions that build bridges between different audio worlds and make systems and formats more flexible. Audio formats supported include MADI, AES67 and RAVENNA. Headquartered in Mittweida, Germany, DirectOut products are distributed worldwide.