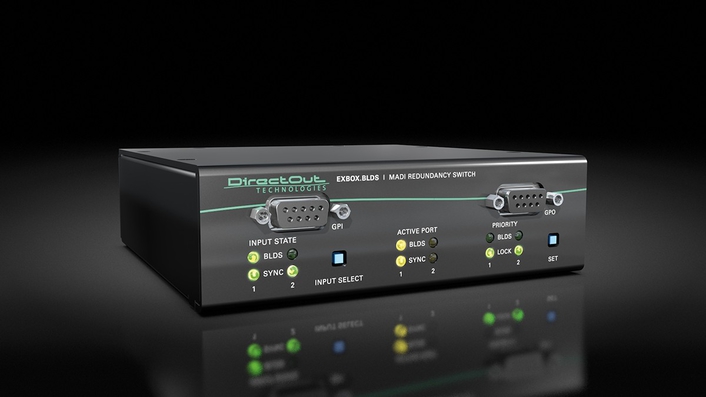 Connectivity specialists DirectOut have given their popular EXBOX.BLDS MADI redundancy switch a complete facelift in order to bring the EXBOX range into line with the rest of their new-look portfolio. The revitalized EXBOX.BLDS will be shipping in the next few weeks.

“EXBOX.BLDS is one of those vital but unsung products that you find on major productions worldwide,” explained DirectOut’s Christian Müller. “Everybody who uses it loves it and it becomes an essential part of their digital toolkit. We felt it was about time that we gave it its share of the limelight with a complete re-design and a fresh new look!”

The device has won many fans along the way, including Will Sanderson, MIDI, playback and keys tech for British singer/songwriter Ellie Goulding who is currently touring her 3rd studio album, Delirium.

“The EXBOX.BLDS has been a real game changer for us in terms of system design, performance and reliability,” says Sanderson. “It’s silent, sample-accurate MADI switching of as many channels as we can throw at it, in such a compact and lightweight unit unlocked new system design possibilities and was the key to giving us an extra layer of redundancy. The main playback and keyboard rig on the Ellie Goulding “Delirium" World Tour uses three EXBOX.BLDS allowing me to switch silently and seamlessly between redundant playback and keys rigs and also switch to running the keys from the playback computers should the need arise. This extra layer of redundancy means I’m covered for all eventualities and the show carries on seamlessly even if there is problem-solving going on behind the scenes. The best part is that all three fit neatly into a 1U rack space.”

“What I also really like is it gives my rig scalability - both up and down. If I need more channels it can handle it. Similarly, if I need to condense the rig into a playback fly rig I can build the playback side into a 2U carry-on rack without compromising on channel count, audio quality or redundancy. It’s a very elegant, reliable solution.”

Gerhard Jansa, Head of Sound at Eurovision 2015, is also delighted with the performance of EXBOX.BLDS. “We integrated the EXBOX.BLDS into our OB vans at the Eurovision Song Contest 2015 (ESC) in Vienna as they were already used successfully at the ESC 2014 in Copenhagen. We used two redundant pairs of Pro Tools systems: one was triggered via MIDI for the playout of the backing tracks or stems. The other one was inserted into the console’s signal chain for automixing, which was synchronized via timecode. An EXBOX.BLDS secured each system with seamless signal feeds and it worked like a charm.” Indeed, thanks to their success on the previous two ESCs, the EXBOX.BLDSs were used to equally good effect on Eurovision 2016 in Stockholm.

Marty Beath, FoH engineer for Brandon Flowers and The Killers, is just as enthusiastic. “For Brandon Flowers’ world tour I was looking for a possibility to keep my playback system digital and still maintain redundancy by using a switch. This was a real challenge as I wasn’t sure that anything actually existed on the market that would make this possible. Quite by accident I came across DirectOut’s little EXBOX.BLDS redundancy switcher and it put a big smile on my face. We are now using two Dante-to-MADI interfaces for our playback computers to output Pro Tools and MainStage streams to the EXBOX.BLDS for redundant fail-over. Then DirectOut’s MADI.BRIDGE distributes the signal to our Digico SD-7 A and B engines at Monitors and our SSL L500 at FOH. Very cool!”

The idea for the product came from one of those “what if?” scenarios posed by a customer one day. What if, in the middle of a live performance, say, at the Eurovision song contest, there is a problem with the playback? OK, so you switch over to the backup system, but how do you ensure a seamless transition with no silences or drop-outs?? Enter EXBOX.BLDS….

Simply put, EXBOX.BLDS detects MADI streams from both playback systems (the one in use and the redundant system) and switches seamlessly from one to the other in case of failure. “Failure” can be described either as loss of signal lock at the EXBOX.BLDS input due to a physical break in the signal, signal stutter due to system overload or an application hang in the playback system which causes the hardware to repeat the content of the output buffer in a loop. There is still a valid physical signal, but it doesn’t sound good!

“Whilst it’s not a big deal to detect a loss of signal lock, recognizing the weird and indeterminate sound caused by a buffer loop requires some fancy engineering,” explains Müller. “In fact, BLDS stands for Buffer Loop Detection System which is like the brain of the device. A provided software tool creates a wav. file that is output by the playout system together with the playback feeds. The MADI streams are monitored by the EXBOX.BLDS. If the control signal is violated in any way, or missing, the EXBOX.BLDS automatically triggers the switchover.

DirectOut GmbH was founded in 2008 by a team of professional sound engineers headed up by Stephan Flock, an award-winning classical music sound engineer with over 20 years’ experience in digital audio signal processing design. The company specializes in developing essential pro audio connectivity, networking and bridging solutions for broadcast, studio, live and installed sound applications. Unique in that all members of the DirectOut development team are still active professional sound engineers, the company is thus fully focused on real-world demands and problem solving. The product range, marketed under the brand of DirectOut Technologies®, offers solutions that build bridges between different audio worlds and make systems and formats more flexible. Audio formats supported include MADI, AES67 and RAVENNA. Headquartered in Mittweida, Germany, DirectOut products are distributed worldwide.