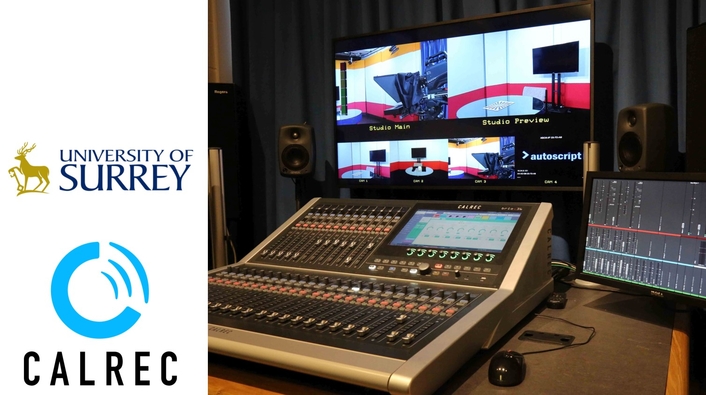 he University of Surrey, UK, has upgraded its television studio with a Calrec Brio audio console as a key part of the refurbishment. Internationally recognised as the UK centre for the prestigious Music and Sound Recording (Tonmeister) Audio Degree, the school has now introduced an equivalent film and video production technology programme, which is in its third year.

Andy Attwell, Television Studio Manager, said, “To support the introduction of this new programme, we took the opportunity to give the television studio a major infrastructure upgrade, including cameras, a vision mixer, signal routing, audio, IT networks and fibre optic connectivity to the wider campus. The previous sound desk couldn’t keep pace and we needed something which provided increased flexibility and capacity. The Brio met all our requirements.”

The course’s central aim is to give students a true, professional broadcast experience, meaning the university’s facilities must match that ambition. Professor Tony Myatt, Head of the Department of Music and Media, described Calrec as being “the obvious choice as industry leaders in the field”. The department also highlights the support offered by Calrec.

Taking full advantage of the Brio’s networking capabilities, expanding connectivity via an additional I/O box, means that all networking requirements are easily taken care of. This includes inputs for a MADI card, which connects the Brio to the facility’s main audio studio, and a Dante card to teach students audio over IP — which is becoming increasingly important as the shift toward IP gains traction. This is in addition to integrating RTS talkback into their audio workflows via the Brio’s Hydra 2 connectivity.

Alan Haigh, Programme Director, Film and Video Production Technology, University of Surrey, said, “The Brio fits perfectly within our needs; it’s designed very well both in usability and audio engineering terms. Having the external I/O box allows our students to see the Hydra2 network in action and set up their own routing and clean feeds. This takes them into the professional world and clearly illustrates the teaching we do in signal flow, processing and routing. We also love the labeling on the aux send meters, the configurable layout, and the large number of faders.”

The Brio was sold through Synthax, Calrec’s exclusive UK distributor for the Brio console. Synthax Managing Director Martin Warr said, “As is widely known, there’s a real need to encourage students into the broadcast world in the widest sense. The University of Surrey is known for its audio degree, and we’re delighted that Calrec’s Brio is preparing its students for real-world experience and careers in broadcast audio engineering. We think it’s this type of versatility, coupled with a budget-friendly price point, that gives Brio an edge in what’s a very competitive market.”

Calrec Audio is exclusively dedicated to excellence in audio mixing for on-air and live production. A broadcast specialist for more than 50 years, Calrec has developed a range of digital consoles relied on by the world’s most successful broadcasters. For putting sound in the picture, broadcasters put their trust in Calrec. More information is available at calrec.com.