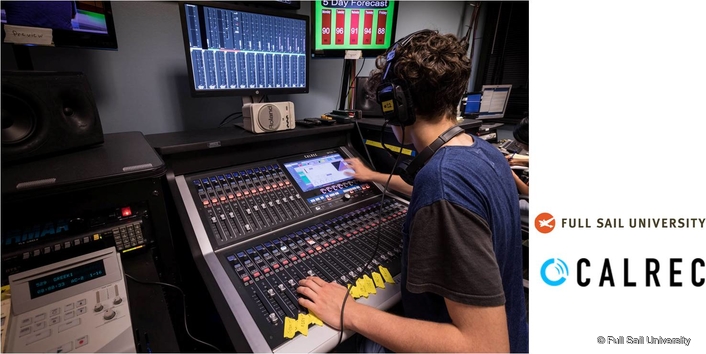 A pair of Calrec Audio’s Brio compact audio consoles recently joined the facilities at Full Sail University, providing valuable hands-on training and experience in audio mixing for students in the Film bachelor’s degree program, as well as being utilized in the university’s on-campus performance venue.

Full Sail University offers both campus and online degree programs in entertainment, media, arts and technology. In the Show Production Department, an existing Calrec Summa console was previously purchased to bring a broadcast-specific feature set to the Show Production bachelor’s degree program. Its students use the console to mix a broad range of live video and broadcast events.

“We really like the Summa’s layout and features, but one of the main features that really appealed to us is the Hydra2 modular rack,” says Vince Lepore, Course Director, Show Production, Full Sail University. “We were able to load it with a mix of analog I/O and Dante® cards. Our entire production facility uses Dante to transport audio between the different rooms, so having the Summa on the Dante network as well was a bonus. The modular rack also gives us the ability to be flexible in the future with our I/O, and of course it allows us to teach the Hydra2 network to our students.”

In the Film Department, a new Brio console has been added to the workflow, as an upgrade of the previous audio mixing boards. Duane Moore, Course Director of Broadcast Production at Full Sail University states, “The students are using the Calrec Brio to learn live production audio and to mix sound for their live shows in the broadcast studio. We chose the Brio because Calrec consoles are high-quality, they have the features needed to teach audio for live broadcast and are likely what students will use in the industry after graduating.”

“The Brio console is a big upgrade for our students from the analog board they were using before,” says Jeff Planck, Program Director of Film at Full Sail University. “With the touch of a few buttons, they can now create and use preset ‘shows’ and ‘memories’ that customize the Brio for their specific show. The Brio also provides convenient network interoperability with the other studios on campus featuring Calrec consoles.” A cornerstone of the university’s curriculum is providing industry standard equipment to facilitate a hands-on approach to learning. At Full Sail, the university places a large emphasis on giving their students’ real-world industry experience and creative problem-solving opportunities.

“The new Brio’s deliver the core functionality that students need to learn in a broadcast audio console, but at a price point that made sense for us,” says Scott Dansby, Director, Industry Relations at Full Sail University. “We chose to purchase all of our units based on Calrec’s reputation of making high-quality, live-broadcast audio consoles. Since these systems are used throughout the industry, we knew we’d be giving our students experience on a board they’ll likely be using in the future and throughout their careers.”

About Calrec Audio Ltd.
Calrec Audio is exclusively dedicated to excellence in audio mixing for on-air and live production. A broadcast specialist for more than 50 years, Calrec has developed a range of digital consoles relied on by the world's most successful broadcasters. Increasingly consoles are integral components on a facility-wide networks, giving rise to adaptable workflows, shareable resources and the ability to be easily expanded. From the very beginning, Calrec has created innovative solutions that have allowed broadcasters to develop their working methods and get greater value from their equipment. For premium audio solutions, broadcasters put their trust in Calrec.