UltraStudio HD Mini is a portable Thunderbolt 3 capture and playback solution that’s small enough to take anywhere and powerful enough to work on high end projects. It can capture and playback all formats up to 1080p60 in full 10-bit YUV, or up to 1080p30 and 2K DCI in 12-bit RGB. UltraStudio HD Mini features HDMI output for monitoring on a big screen television, dual 3G-SDI outputs for fill and key playback, plus analog audio and video inputs for digitizing and archiving materials from older analog decks. 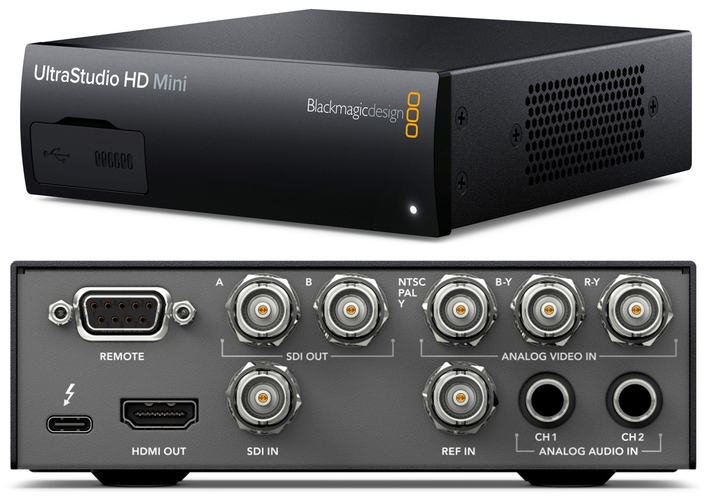 This combination of connections greatly assist in workflows commonly used today. For example when doing archiving, customers need to connect to older broadcast decks such as Digital Betacam, Betacam SP and even 1” C format open reel decks. With analog component, composite and SDI inputs, plus a deck control serial port, UltraStudio HD Mini has all the features needed to connect and capture directly from those decks.

When working with modern editing and color correction software, such as DaVinci Resolve, customers can use the Thunderbolt 3 to HDMI or SDI outputs for high quality broadcast monitoring with perfect AV sync. When doing live broadcast graphics, customers can use the dual SDI outputs to output in real time both fill and key signals to downstream gear such as live production switchers. This lets computers output live graphics for keying over live action.UltraStudio HD Mini features advanced Thunderbolt 3 technology that is capable of transferring data at up to 40 Gb/s. These data rates make it possible to capture and play back fully uncompressed video, leaving the computer’s CPU free for more processing tasks. UltraStudio HD Mini is also powered via Thunderbolt 3, so it powers from a laptop computer’s battery and customers don’t have to carry an external power supply with them when they’re on the road.

Designed for portability, UltraStudio HD Mini fits in ⅓ of a standard rack space so it can be racked alongside other equipment or used stand alone on the desktop. It’s also compatible with the optional Teranex Mini Smart Panel, which adds enhanced front panel controls and LCD monitoring so customers can preview video, see audio meters, timecode and more. Ultra Studio HD Mini is even small enough to fit in a backpack with a laptop and portable drive, making it the ultimate on-the-go capture and playback solution.

Customers can purchase the optional Teranex Mini Smart Panel which adds LCD monitoring and additional controls to the front of UltraStudio HD Mini. The easy to install design features push button controls and a bright color display for previewing video with audio meters, timecode and format information. It can also be used to adjust settings and change the source video input.

An exciting advantage of customers using the Teranex Mini Smart Panel is the LCD on the panel shows video and audio levels, plus status information. This status information shows input selection and video format used, as well as the frame buffer level indication. The frame buffer indication is a quality of capture and playback indicator and it will show the number of full buffers on playback or the number of empty buffers on capture. This means broadcasters can evaluate the performance of storage media while capturing or playing and have an indication of disk speed trouble well before it happens.

UltraStudio HD Mini supports more editing, design and video software than any other capture product. Customers get full editing compatibility with DaVinci Resolve, Final Cut Pro X, Media Composer, Premiere Pro and more. It can be used to create stunning visual effects with Fusion and After Effects, and for color correction with DaVinci Resolve.

“UltraStudio HD Mini with Thunderbolt 3 makes it possible to capture and playback 10-bit, broadcast quality video anywhere,” said Grant Petty, CEO, Blackmagic Design. “It’s exciting because of how portable and versatile it is. Unlike traditional cards that require a full size PC, UltraStudio HD Mini can be used directly attached to cameras in the field, on set, in the studio and suites for virtually anything!”

• Thunderbolt 3 interface capable of up to 40 Gb/s transfer speeds.

• Supports 3G-SDI Level A and Level B.

• Supports 16 channels of embedded audio on SDI and 2 channels on HDMI.

UltraStudio HD Mini is available now for US$495 from Blackmagic Design resellers worldwide.