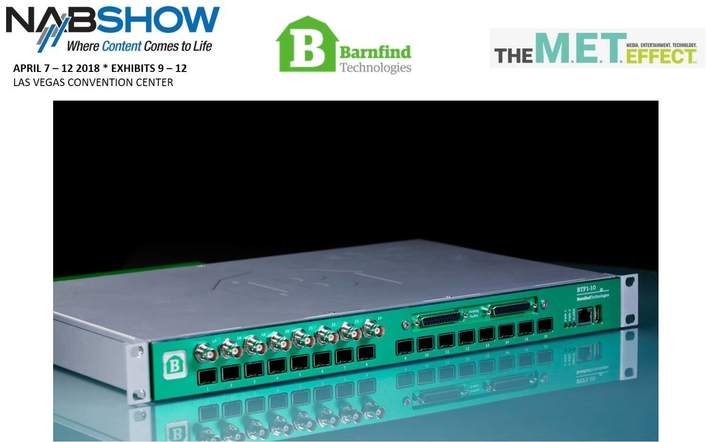 Norweigan manufacturer Barnfind Technologies is debuting its new BarnOne BTF1-10AA Frame at NAB 2018 in Booth # SL 9630. The BTF1-10AA expands the BarnOne Platform to meet the industry demand for a frame that transports analog audio signals,. This latest addition to the company’s multi-functional, signal neutral fiber transport platform is packed with features that make it ideal for the sports broadcasting market.

According to Benno Sonder, Barnfind System Design Manager, “With the new BTF1-10AA, all signals connect to the OB van via one single-mode fiber, and a second redundant one, if required. The MADI stream carrying the audio signals from the commentary unit in the OB van connects directly to the audio console by BNC or optical, there is no additional DA conversion necessary.”

The BTF1-10AA features an analog audio interface and includes 8x balanced analog line level inputs and outputs. The frame is equipped with high-end AD/DA converters which convert the analog audio to MADI (AES10), enabling audio signals to be transported along with others in Barnfind’s portfolio.

MADI has been  a staple in Barnfind’s signal transport spectrum from day one. BarnOne’s signal neutral crosspoint matrix, together with the SFP and BNC interfaces, converts MADI from electrical to optical and from single-mode to multi-mode at the same time, and vice versa. It can also distribute one MADI source to several destinations simultaneously. To complete the picture, the new BTF1-10AA frame houses an audio board with a 264x264 channel audio matrix featuring 4 bi-directional MADI interfaces that connect to the main matrix of the BarnOne frame, and 8 balanced analog line level inputs and outputs.

The board offers audio routing on a per channel basis for all 4 MADI streams and the 8 analog ports, making the card a powerful single channel MADI-Router with analog interfaces. In conjunction with the main matrix it can be used for MADI electrical-optical conversion or distribution. Alternatively, it can simply connect analog audio equipment directly to the MADI interfaces of an audio console or core. The interface to the console can be optical single mode or multimode fiber or electrical by coax cable (BNC).

The BTF1-10AA also serves as a powerful MADI-Router for 4 MADI streams with interchangeable optical/electrical interfaces that houses all the functionalities of a BarnOne frame.

“We’ve already introduced the BarnOne BTF1-10AA to several customers that requested it, and have received extremely positive feedback,” stated Wiggo Evensen, Barnfind CEO. “They are very pleased with the features that the unit offers, and noted that it meets their needs, especially when targeting the sports market.”

About Barnfind:
Barnfind Technologies AS, headquartered in Sandefjord, Norway, manufactures a multi-function signal transportation platform that supports numerous signals in one frame, including common video and telco formats such as KVM, SDTI, SMPTE 2022-6, MADI, SDI to IP, 4K 60p workflows, HDMI, DVI, CAM-CCU etc. In addition, there is a full 32 x 32 router in the frame with re-clocking on all outputs (BNCs and SFPs), reference input, full redundancy and the capability to have integrated CWDM/DWDM multiplexing. Barnfind’s  “no-cost” control software, BarnStudio, can be downloaded from the website. The platform is also compatible with many 3rd party control systems such as Skyline/Dataminer, ScheduALL, LAWO (LSB/VSM), BFE/KSC, DNF, TSL, RASCULAR, BlackMagic, Ross openGear/DashBoard etc. Barnfind offers the world’s most sophisticated CAM-CCU solution capable of supporting 18 x CAM-CCUs on one single fiber with low jitter and latency. Barnfind is known as the Champion’s company; found in most sport Championships around the world.