ATM is a leading television production company in Poland with a substantial complex and seven studios in the lively Praga district of Warsaw plus a head office in Wroclaw offering another two expansive studios spaces … all of which are constantly busy. The ATM Group was founded 20 years ago and is now a public company with around 500 employees, a fleet of OB vans, substantial equipment inventories and is servicing a variety of productions from conception to completion across Poland and further afield.

The company has a serious inventory of lighting equipment available to service its productions - moving lights, conventionals and LED fixtures and in recent years has invested in Robe, initially with LEDWash 800s followed by LEDWash 1200s and most recently, 50 x Spikies.

The first Robes – LEDWash 800s - were purchased for the Euro 2012 soccer championship hosted jointly by Poland and Ukraine. The reason they started looking at what Robe had to offer was the perception that Robe’s LED wash was the first really good example of that genre of moving lights, explained project manager Wojtek Lampkowski.

The lights are used to service their own productions and are also available as part of the assorted technical packages offered to other production companies booking the studios.

ATM works with numerous LDs and DoPs, both freelancers and those working full time for the company across the two sites and it is also considered a good proving ground for new and emerging technologies.

The first purchase of LEDWashes was for 26 pieces, delivered by Robes Polish distributor Prolight, and the experience was so good that from that moment forward, they decided they were going to buy only Robe LED washes.

There are now over 100 LEDWash 800s in stock and "they work absolutely all the time" confirms Wojtek, which is something that clearly interests ATM’s financial director Emil Dluzewski, who is also on the board of directors.

Annually, ATM will produce 10-12 major TV shows themselves, each of which will have around 10 episodes. Shows include popular music and dance shows like The Voice, Dancing with the Stars, Polish Idol, etc.

The Spikies have been purchased in the last year because they were looking for something small and unique. After seeing the versatile little fixture at the Prolight+Sound expo in 2016 when it was launched, they placed their order and since then the Spikies have also been constantly in demand, reinforcing their decision. 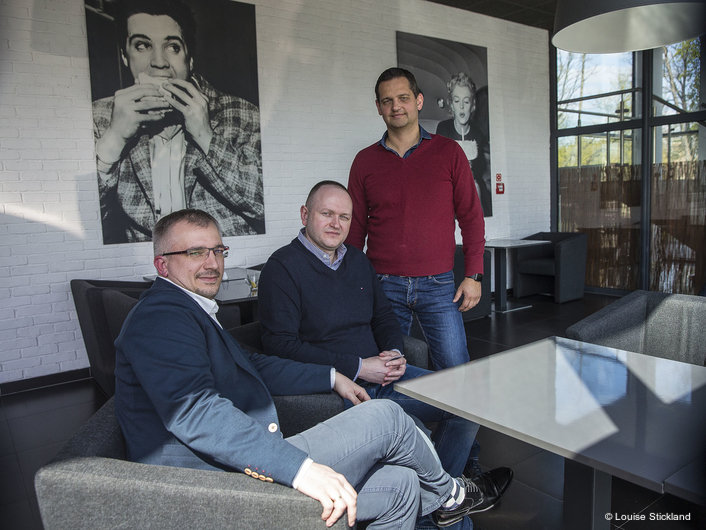 ATM’s Spikies were immediately specified on Dancing with the Stars and Polish Idol by top LD Artur Szyman and they will shortly be used on the new series of Your Face Sounds Familiar.

Wojtek remarks on the excellent uniformity of colours and light quality – between batches - of the LEDWashes as well as the comparative pricing!

He thinks the Spikie is a winner because it's new, small, "fast with good output" and naturally, like all LED … it's shaping the future of lighting.

He first started working with Robe products when he joined ATM and mentions that the good relationship they enjoy with Prolight and the superlative backup and support is also fundamental to their decision to purchase the brand.

He has visited the Robe factory and was delighted to meet Robe’s owner Josef Valchar in person. The opportunity to chat with him directly about current products, future strategies and market trends made a big impression.