Asharq News Excels in the Media Industry of the MENA Region 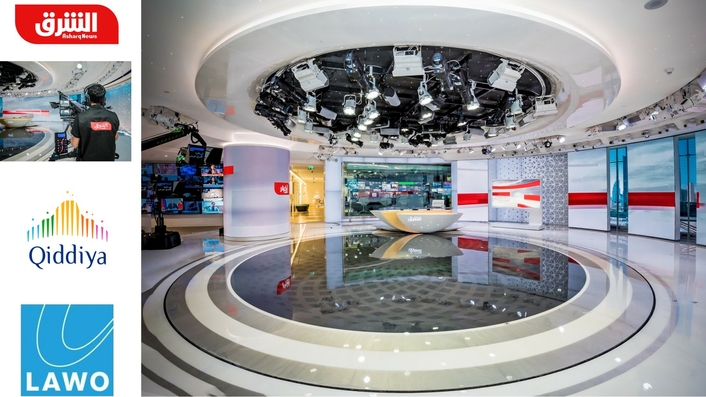 Asharq News, the new leading multiplatform economic and political news service launched in November last year, is the first project in the MENA region in which the media infrastructure is based entirely on IP technology. A central role is also played by the use of virtualized on-premises systems and cloud applications as a hybrid architecture for content aggregation, production and distribution. The overall control of the infrastructure is carried out by the use of Lawo’s VSM Virtual Studio Manager Broadcast Control System. In early February 2021, Asharq News was awarded the 2020 Broadcast Middle East Award in the category “Innovative Project of the Year”.

Asharq News has ambitious goals in every respect for the development of its media center. Asharq relied on a team of specialists consisting of an international firm of architects, local construction companies and the general contractor Qvest Media for all technology issues right from the design concept and space planning of the building. Hand in hand, a perfect symbiosis of modern interior and workplace design as well as functional spatial architecture was developed, embedding the editorial, creative and technological work into the set and studio design. 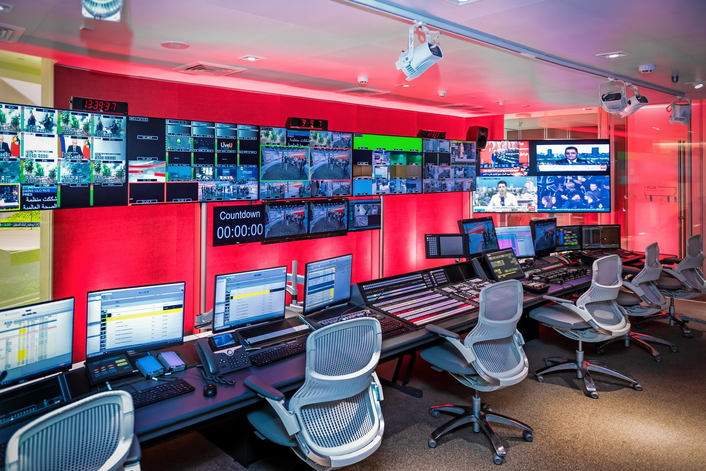 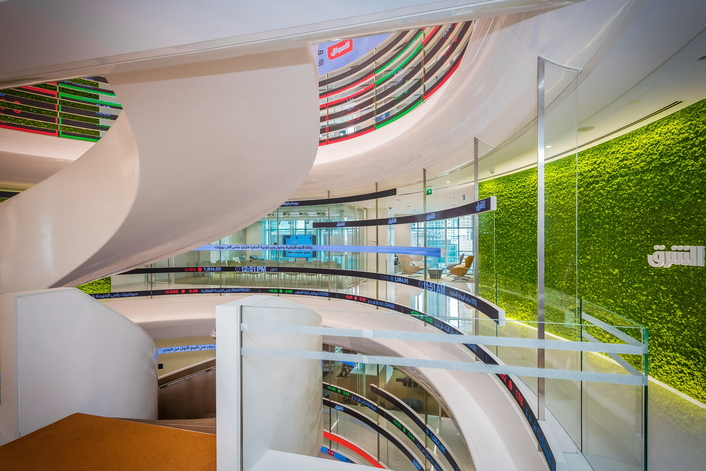 A great add-on service for multi-studio facilities with frequent changes to the studio floor setup, like Asharq, is VSM’s new Wallboxing functionality, which allows moving devices across an API-controlled IP infrastructure and to maintain flow connectivity. In a large production facility, devices like stageboxes, monitors, teleprompters, etc., are likely to be moved around a lot. Wallboxing ensures that existing IP links are re-established when a device is connected to a switchport at the new location.

Asharq News, launched on 11.11.2020, is a 24/7, multiplatform Arabic news service reaching across the Arab world and beyond with a unique approach: news and in-depth analysis reported through the prism of the economy to empower people in their everyday lives. The Asharq News experience is delivered through a dedicated television channel, as well as multiple digital platforms, offering continuous insights into the people, events, organisations and ideas that impact the MENA region and international markets. An exclusive content agreement with Bloomberg Media, the business and financial information news leader, powers a key component, “Asharq Business with Bloomberg”, drawing on Bloomberg’s comprehensive coverage from more than 2,700 journalists and analysts globally. “Asharq Business with Bloomberg” aims to become the premier Arabic-language business news provider, using multiple platforms to reach business leaders, as well as a younger generation that understands the importance of global economic, financial and corporate information. With this collaboration, Asharq Business teams (broadcast and digital) have access to Bloomberg’s extensive financial and economic content, analysis and market data, curating translated stories from Bloomberg to our platforms. ‘Connecting the Dots’ is Asharq News slogan that drives its journalistic work and sets its ultimate goal. The dots at Asharq News connect the news to its context, geographical setting, historical dimension, political depth, economic impact and social reality. Asharq News targets decision makers, businesspeople, entrepreneurs, and political and technology leaders through its economic content, as it addresses all aspects of political developments from an economic perspective. Asharq News is headquartered in Riyadh, with central offices in the Dubai International Financial Centre, UAE, and Washington D.C., and has major hubs and studios in Cairo and Abu Dhabi. It also has regional offices and correspondents across key Arab countries and in global capitals, in addition to access to the content produced by hundreds of reporters from Bloomberg's network around the world. Asharq News is owned by the Saudi Research and Marketing Group (SRMG): we belong to a large and well-established media conglomerate and family. Established in London in 1978, SRMG is the Middle East’s largest publishing group and only publicly listed media company, with more than 16 publications and digital platforms providing the latest in political, financial, sports, and lifestyle news and analysis. Within its first 3 months of launch, Asharq News was awarded ‘ME Innovative Project of the year’ 2020- at the annual BroadcastPro Annual Summit & Awards and shortlisted as trendsetter

Lawo designs and manufactures pioneering video, audio, control and monitoring technology for broadcast, performing arts, install and corporate applications. All Lawo products are developed in Germany and manufactured to the highest quality standards at the company’s headquarters in the Rhine-Valley town of Rastatt, Germany.

In 2020 Lawo celebrates 50 years of engineering the future. Founded in 1970 as an engineering office with a focus on audio and broadcast, the privately-owned corporation grew into an industry-wide accepted innovator who continues to actively shape the future of broadcast and media production.