Broadcast RF gets Lost in London 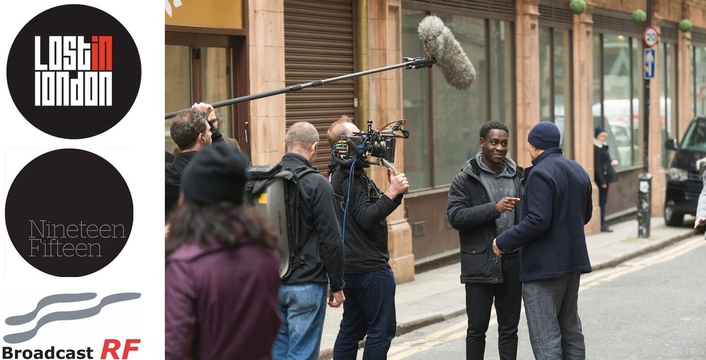 Broadcast RF today announced that it supplied the full turnkey wireless solution for the 100 minute comedy, Lost in London, written, directed and starred in by Woody Harrelson, that is the first ever Hollywood movie to be broadcast live to more than 500 cinemas in the USA and one cinema in London.

Lost in London is a semi-autobiographic depiction of a 2002 London nightclub incident and its aftermath involving Harrelson, which eventually saw him having an overnight stay courtesy of the London Metropolitan police.

Loosely based on the events of that night, The Natural Born Killers and Indecent Proposal star wrote a natural born proposal and script to recreate the infamous adventure, more or less as it happened, and present it live using Broadcast RFs state-of-the-art wireless technology.

“Most of Harrelson’s friends told him he was insane to do this when he first proposed the idea, and at first we had reservations ourselves,” said Broadcast RF’s sales director Chris Brandrick. “But very soon after we received details of what was required, we knew we could do it technically.  We’re experts in this field, and have covered entire marathons with the same technology, but a live film, broadcast to cinemas on the other side of the Atlantic, with one camera, was an altogether different proposition.”

The unique broadcast was filmed with one camera and in one take, so there was no room for error. 100 percent coverage had to be achieved as there were thousands of paying customers watching eagerly for this world first.

A Domo HD transmitter was built into a backpack that contained the transmitter, four batteries, and sound equipment, carried by a grip. The transmit backpack was connected to the film camera, an Arri Alexa Mini shooting in 1080/23.98PsF, by an umbilical cable.  Whilst the camera was recording on board, the live video was transmitted through the transmitter and received at 14 locations throughout central London via a total of 54 antennas.  The transmitter runs at just 100mW, relayed by a chase car running 4W for in-car scenes. The event marked the largest single RF camera job Broadcast RF has ever done, including providing RF facilities for events such as Wimbledon and the Ryder Cup combined.

Mark Houghton, technical director of Broadcast RF, said, “What was achieved in London last night was historic.  It took the passions of Woody and his cast and crew, the drive of the production teams and determination of a technical crew to turn fantasy into history.  With more receive sites than the Wimbledon Tennis and the Open Golf Championships combined and an arsenal of RF trickery, we joined 14 locations together to produce a cinematic first.”

All 100 minutes of the film, which progressed through a theatre, restaurant, nightclub and police station along with travelling in a camper van, two London taxis and a police van through the streets of London before the finale in the centre of Waterloo Bridge, were captured and transmitted using a single wireless camera system designed and supplied by Broadcast RF.

Nick Fuller, Lost in London project manager, Broadcast RF said, “When this project landed on my desk, I thought our sales guys were crazy.  After digesting what was required, I was resigned to the fact that I would be spending my time wandering around London looking for suitable receive positions to make this work.  We had only six weeks - with the Christmas break in the middle - to plan this project but were determined to make it happen.  In all my years in this industry, I have never worked on such an interesting project, and it was all the more enjoyable to see Woody, the cast, and crew create something very special.”

“Without Nick, this wouldn’t have happened,” Brandrick added.  “His detailed planning and preparation, along with the technical team behind him, was instrumental to this production.”

Vicki Betihavas, Lost in London live producer for London-based production company Nineteen Fifteen said,  “I needed a trusted partner I could rely upon.  I have worked with other RF companies, but knew the only company that could deliver on the scale we required for this project was Broadcast RF.  Last night we made history, and Woody is over the moon with what we achieved.  I am so proud to be part of this and without Broadcast RF, it wouldn’t have happened.”

About Broadcast RF
Broadcast RF was formed in 1998 to provide the broadcast industry with access to the latest microwave and wireless camera equipment. Broadcast RF has one operational goal, the provision of the high quality state of the art RF technology to be used in the making of television programmes covering sports, news, light entertainment and film events. From a standing start, we have grown from a handful of clients to one that provides services to a worldwide market and boasts regular recurring or contracted commissions from well-known companies in the broadcast sector. We pride ourselves on our client support, from initial contact to final delivery. The quality of equipment and the attention we apply to each client’s requirements has fostered an ever growing list of loyal customers. We supply the complete package, from our focus on strong client service, to frequency management/booking anywhere in the world. Our equipment is tailored to the specific task and needs of our clients, supported by access to 24/7 technical support and our extensive range of backup equipment. We are totally flexible to the needs of our clients whether it is a single antenna or a large scale engineered project. We have proved over the years that our commitment and dedication to our projects is key to our growth and ability to supply RF facilities on a global scale.