All Routes Lead to BroaMan at IBC2016 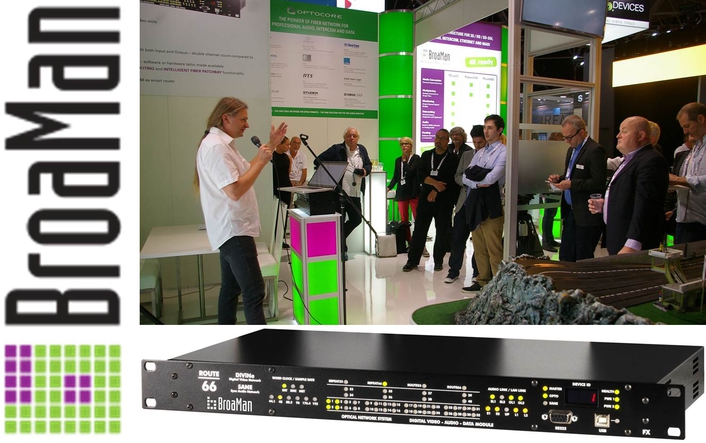 At this year’s IBC 2016, BroaMan found the perfect platform from which to springboard its new Route66 family of routers into the broadcast markets and associated sectors.

The German company carried on where they left off at this year’s NAB Show, where the new Route66 AutoRouter picked up a prestigious award. Supporting DiGiCo, as well as standalone Optocore systems it closes the ring automatically once a mobile stagebox is added or removed from the system

“Many clients and distributors were talking about this product,” said managing director, Tine Helmle. “They love the device and the stand was buzzing.”

Also shown for the very first time was the new Route66 40/40, and a highly successful press launch formed the hub of the five-day show. Presented by BroaMan technical director Marc Brunke, the international press audience was enrapt as he explained the evolution of the Route66 platform since it was invented as a custom solution for SVT, the Swedish National broadcaster, exactly five years ago to the month.

Once again Tine Helmle was delighted with the reaction, both from partners and press alike. “It was extremely well accepted and both distributors and resellers seemed highly impressed,” she said. “We picked up high quality leads continuously right through the show — including the last day, which is generally quiet.”

To have received so much positive feedback indicates that BroaMan is well accepted as a market leader for professional video fiber infrastructure. 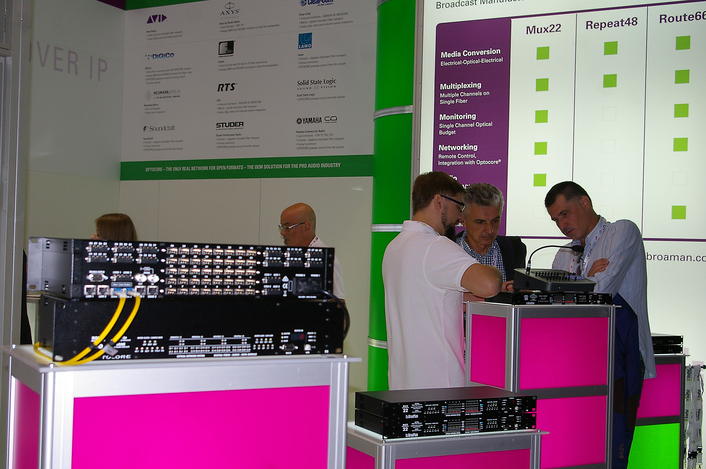 BroaMan (Broadcast Manufactur GmbH) is a German-based manufacturer of highly reliable, professional and advanced products, which use a fibre infrastructure to integrate Video, Audio, IP, Intercom and other Data on a redundant low latency system.

These interfaces are aimed at broadcasters as well as production companies, sport facilities, professional AV integrators and many more applications. The company offers solutions for every application that requires SD/HD/3G video transport or routing – whether a big and complex system for broadcast studio or OB Van, or a simple point to point for a small church, conference hall, etc. With DiViNe (Digital Video Network) all open standards can be integrated — digital video, audio and data — on the same fibre infrastructure.