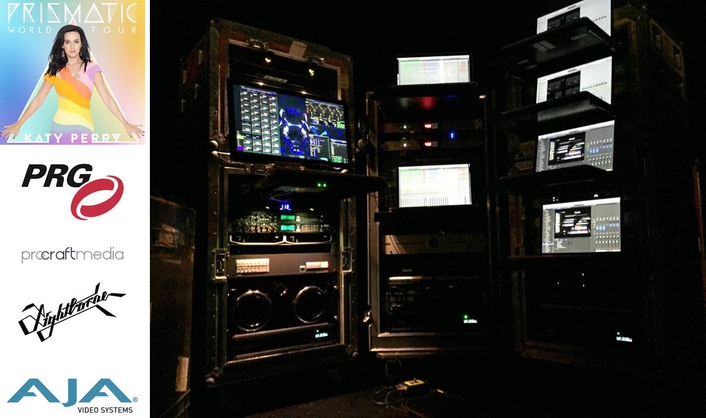 The stage is adorned with large LED walls that screen video clips throughout the performance, providing context for the action on stage. To cue up the content on time for the Asia leg of the tour, Gion banked on an extensive workflow, with video input, output, conversion, scaling and recording powered by a combination of AJA gear, including ROI and HD5DA Mini-Converters; Io 4K capture and output hardware; and Ki Pro recorders. 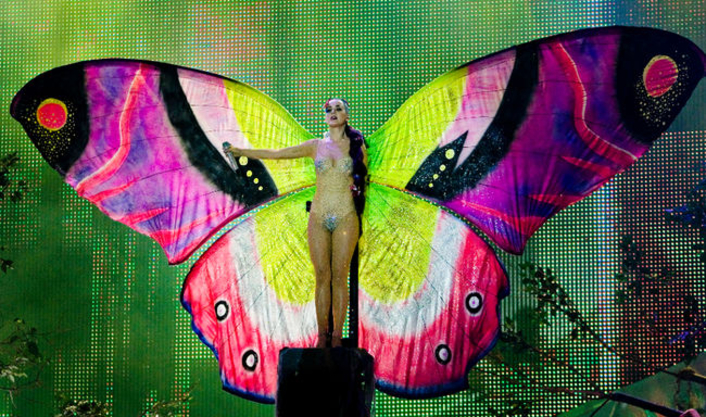 “Video walls are a huge part of this show, so we needed a flexible workflow with smart, reliable products. I’d had a good experience with AJA KONA cards in the past, so I thought I’d give some of its newer products a try,” said Gion. “It amazes me how AJA wraps so much of the key functionality that you’d find in larger, more expensive solutions into affordable, compact units. I could achieve what would typically take seven RU of rack space in a one RU shelf, and that’s fantastic on a tour with limited rack space.”

Prior to hitting the road, Gion consulted with live entertainment vendor Production Resource Group (PRG) to determine which video inputs and outputs the pipeline would need to accommodate. A Mac Pro running Catalyst Media Server Software was driving the video wall content, featuring custom graphics by Lightborne Communications. Gion devised a plan to get DVI graphics content from the Catalyst server to the tour’s main SDI video system and onto the video walls. Looking for a Thunderbolt™-enabled input and output solution, he opted to use three Io 4Ks, and rounded out his workflow with three AJA ROIs and AJA HD5DAs to convert the DVI signal to SDI. Three AJA Ki Pro ProRes recorders in the main director’s bridge also fed line cuts and archives of the show to Gion’s suite, with one Ki Pro feed used to create show highlights for media.

“It couldn’t have come together more beautifully,” Gion explained. “Io 4K was ideal because it has multiple SDI inputs, and with ROI, we were able to easily convert feeds as needed. The AJA technology worked out of the box with our video system, and I didn’t have to make any control panel adjustments, which saved us a lot of time.”

Gion and the video crew rented display walls from local vendors at each tour stop in Asia to avoid the freight costs of transporting staging. With the AJA gear in its full-time traveling kit, Gion found it easy adapt to a variety of screens provided by the AV vendors, and troubleshoot signal issues with new video crews each show. He shared, “In a setting like this, you’re bound to be thrown a few curve balls, but our Io 4K was there to assist; the visual feedback on the unit allowed us to resolve issues quickly. ROI turned out to be a video first aid kit for us with amazing quality scaling. I never had to worry about flickering on the LED screens or unwanted artifacts; the picture always looked perfect.”

Gion constructed his workflow so that every rig contains a redundant backup, in addition to a separate hot backup system. The Io 4Ks are split among the backup rigs with a switcher in the rack that will switch between DVI inputs. This setup allowed Gion to transition the inputs over to a second system if a rig were to fail. ROIs downstreamed the feed and used AJA HD5DAs for each output, with 2 live feeds per signal. “If you look at my backup system, you can see that reliability is paramount, especially in live touring gear; your tools have to be dependable, because there is no pause button in live production, and my AJA gear never fails me; it’s well built and just keeps working.”

In September, Gion took to the road once again with his AJA kit as the South American leg of the tour kicked off in São Paulo, Brazil.