AHH Rock Up the Classics 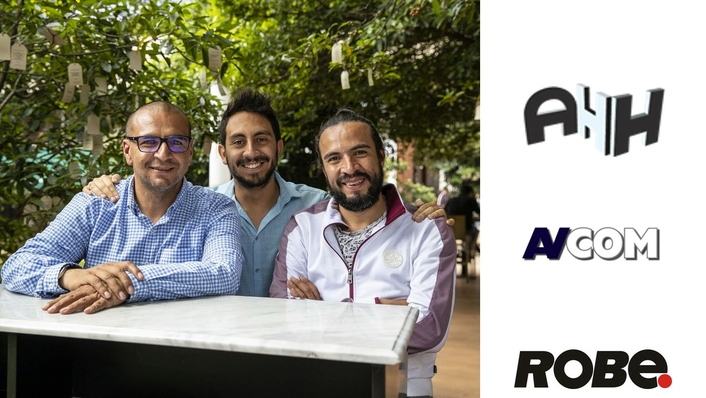 The Hernandez Brothers - Nelson and Humberto - founded their production company AHH in Bogota Colombia with one primary line of business in mind – production services and lighting design – with a small rental operation on the side for generic lights and more rare and unusual items of equipment. They specialize in the genres of orchestral, classical, operatic and vocal performance ... approaching it with the full embrace of technology, which is a completely unique concept in Colombia, and as such they are trailblazers!

Humberto explains that this all started back in 2011 when he was working with the Colombian Youth Philharmonic on a national tour, where their – at the time very radical – approach with lighting and visuals was a risk that turned out to be a huge success.

After this, he was asked to work regularly with the Colombian Youth Philharmonic and others, bringing a sense of proportionality and appropriate production values to the equation!

The Brothers are also involved with musical theatre productions via another company, MISI Producciones, and Humberto designs lighting for two dance companies and one more opera company ... so he has applied his distinctive style of lighting to all genres of theatre and ‘classical’ music.

They first encountered Robe regularly whilst touring Europe with assorted dance and theatre artists and companies, and this was also right at the start of Robe around 15 years ago.

The Brothers started working together 25 years ago when Nelson was head of technical at a theatre in Bogota. Humberto went to help out one day when they were short-staffed on the technical team ... and here they are …  25 years and a bustling and growing business later!

When a tour comes up, Humberto will usually take care of producing the lighting design and together they will deal with the logistics and technical production – sound, lighting, video, etc. – and they will pre-plan the tours, negotiate with any other suppliers involved, etc. and cross rent the gear as needed. (Their own rental inventory includes several standard fixtures for theatre and classical-like fresnels, profiles and PAR 64s.)

Humberto recalls using six Robe wash moving lights on a tour of Italy with a dance group ‘L’Explose’ … and being amazed by the range of effects and the visual depth he could bring to the stage using these.

Back in Bogota, it was about 2009 and well before any Robe arrived on the scene!

However shortly after this came the first – and at the time ‘only’ – Robe theatre installation in Colombia, at Bellasartes, comprising 14 x ColorSpot 1200E ATs ... which are still working!

“I did my first show there when the Robes were brand new and just installed only about two months previously,” declared Humberto with pride!

As Robe becomes more established, and particularly in the last two years, since AVcom Colombia was appointed as the distributor, their moving lights have gradually been creeping into theatre and orchestral venues, and Humberto has done his bit to promote the brand at every opportunity. 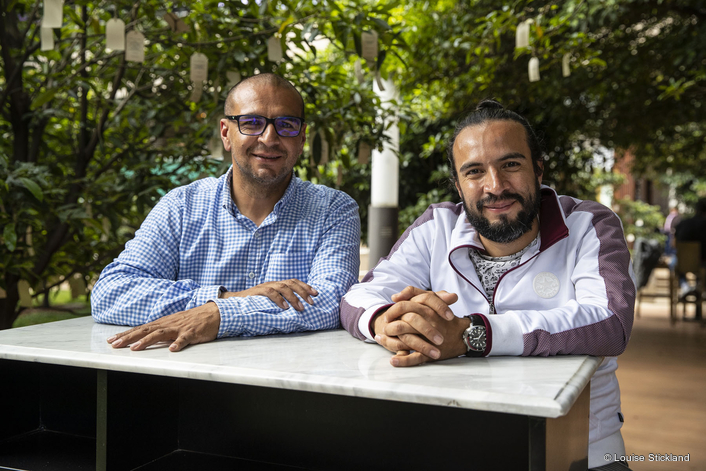 Nelson Hernandez on the left with Humberto

Another theatre, Julio Mario Santo Domingo has now bought miniPointes in the last year. They have 12 units which have made a BIG difference to how shows can be lit there, and Humberto recently used them for a concert by singer Victoria Sur.

Humberto likes the fact that the latest Robe fixtures are generally quiet enough to be used for classical and dance applications, a feature often critical in AHH’s work.

Right now, the Spikies and BMFLs are among his first choice Robe fixtures. On December 2018, he created the lighting for a show with 100 musicians of the Colombian Youth Philharmonic Orchestra and a 200-person choir - in the newly refurbished Movistar Arena. It was accomplished with lots of BMFLs as they now have an extensive Robe house rig.

In March of this year, he designed the lighting for a Disney Theatrical approved production of blockbuster musical Beauty and The Beast. Luckily enough, the Colsbusidio Theater venue which staged this production had just purchased 10 Spiiders and 10 Pointes … and this was the first show to use them!

Humberto enjoys programming shows using moving lights and having the freedom to craft and paint the stage with light. “My goal is to ensure the environment is visual and punchy, that it looks good and reinforces the story and the performance, and helps accentuate the emotions and feelings of the composer - that is what the piece of music is all about”.

Adding visuals carefully and intelligently to this specific environment can add considerably to the audience experience, “and it should never be a distraction,” he underlines. “All of that has to be your main consideration in the lighting and video design.”

AHH currently has a core of five people including a video designer and content producer, and they are all busy working on one or two major shows, some tours a month now plus an array of smaller events.

Humberto forecasts that as Robe continues to become more popular and prevalent in Colombia, he will be specifying and using the fixtures more and more frequently. “Basically, at any opportunity,” he concludes with a big smile.