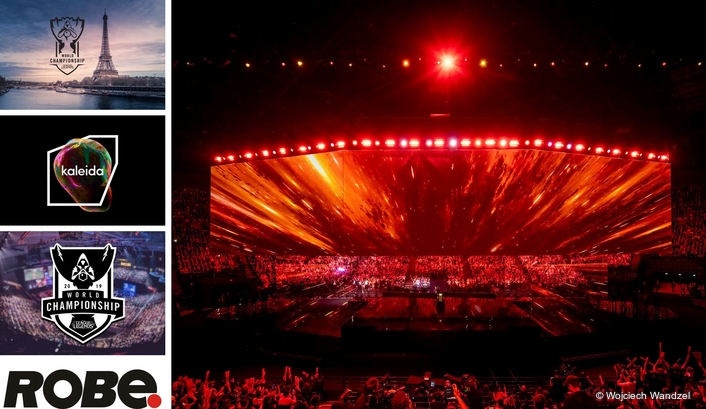 Roy collaborated closely with the creative team from Riot Games and Possible Productions who briefed him on the look and style of lighting that they wanted to achieve for the in-the-round OC show. It energised an arena packed with eSports fans ready for a thrilling seat-edge final.

Drawing on his vast previous experience of working with Kaleida Holonet screens, projection and multi-layered imagery shows, Roy knew he needed mega-bright moving lights with super-accurate shutters – and the BMFL WashBeam was his fixture of choice.

The lights for the OC and the overall LOL World Championship Final events, were supplied by UK based rental company TSL working for production company ConCom Inc.

The OC choreography covered a wide area, so precise key lighting was essential to delivering the show’s aesthetic and narrative which involved creating a series of game-related environments and effects that interacted with the artists and dancers onstage. 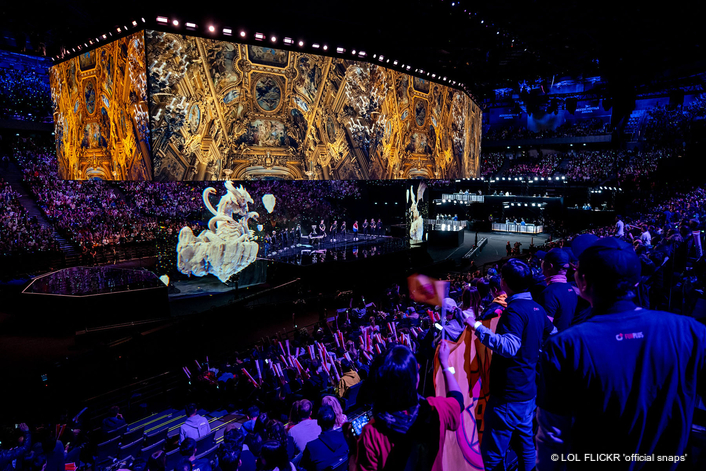 Roy described lighting the event as “a bit like performing surgery – critical base timing, acute attention to detail and in avoiding any reflections onto the gauze.”

The 91 x BMFL WashBeams fixtures and 9 x RoboSpot systems were used for key lighting all the OC artists and performers.

Of the nine fixtures controlled via RoboSpot systems, four had integral cameras and five were running with external cameras. Most parameters were controlled by programmer and operator Brian Jenkins who ran the grandMA3 console for the OC show, with the RoboSpot operators concentrating on movement, iris and dimming.

All nine RoboSpot BaseStations were located back-of-house in a separate room away from the show Area.

A large projection screen surface was flown above and around the stage, with the performance played out along one side of the arena – even though it was in-the-round – with three sections of Holonet downstage and a single panel upstage allowing performers to move in between all of these. 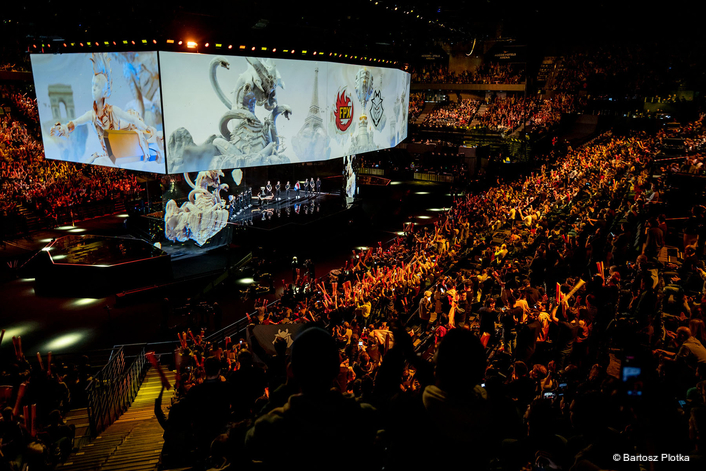 These 91 extra BMFLs were in addition to the World Championship event’s ‘house’ lighting rig, also supplied by TSL which was designed by Arnold Serame and included 160 additional Robe moving lights – 82 x MegaPointes, 48 x Pointes and 30 x T1 Profiles – which Roy also utilized in the OC lighting.

TSL supplied 30 lighting technicians and engineers for the duration of the event, who worked in 2-hour shifts, and one of their big challenges was the control set up – covering the OC show, the tournament event’s lighting and pre-vis were a total of 12 x grandMA3 consoles – a mix of full sizes and lights. Two of each type were dedicated to the OC show.

TSL has also been a steady investor in Robe products in recent years. They had worked as a lighting supplier for the LOL ‘World’ series events in Berlin, Madrid (quarter and semifinals) and then Paris since October 2019 based on a track record for providing seamless delivery and rock-solid control systems for these hi-energy live broadcast environments. 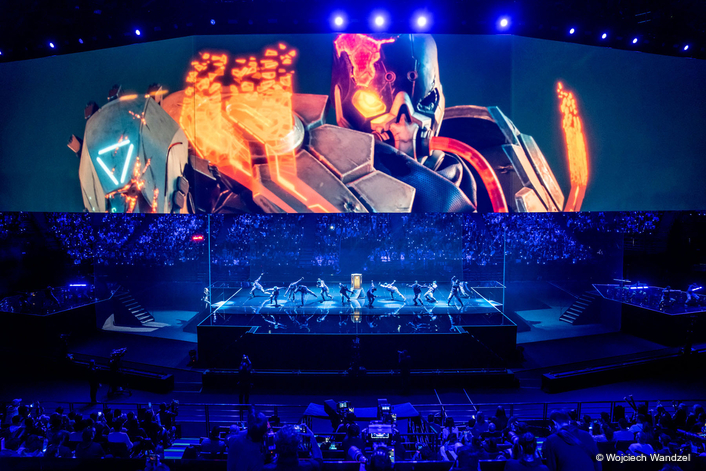 The 2019 League of Legends Championship was won by the FunPlus Phoenix team from China who lifted the Summoner’s Cup and took home more than US $2 million in prize money.

The LOL World Championship Paris Finals have been hailed as one of the biggest ever eSport events to date, with an estimated 100 million people watching globally via the live stream.