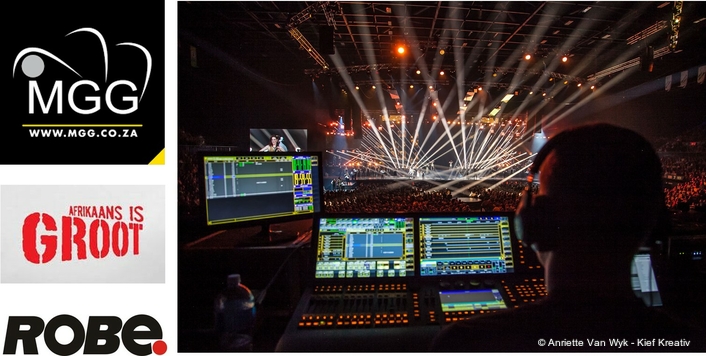 Johannesburg-based MGG, one of South Africa’s leading technical production and rental companies, and a major Robe investor with 706 of their products in stock … enjoyed a hectic end of year season supplying several large and high profile shows and events with technical production packages. The projects ranged from large outdoor festival stages to parties to corporate events and awards shows, explained MGG’s general manager, Denzil Smith. Robe products were utilised for all of these, again proving themselves as flexible and reliable options for multiple applications.

December started with the end of a two-week run of Afrikaans is Groot (AIG) shows staged at the Sun International Time Square Sun Arena in Pretoria - for which MGG is also the house technical services provider.

Lighting was designed by Joshua Cutts of Visual Frontier and MGG supplied all technical elements - lighting, video, audio plus rigging and staging for organisers Coleske Artists. It was their eighth consecutive year of involvement with this state-of-the-art performance spectacle. 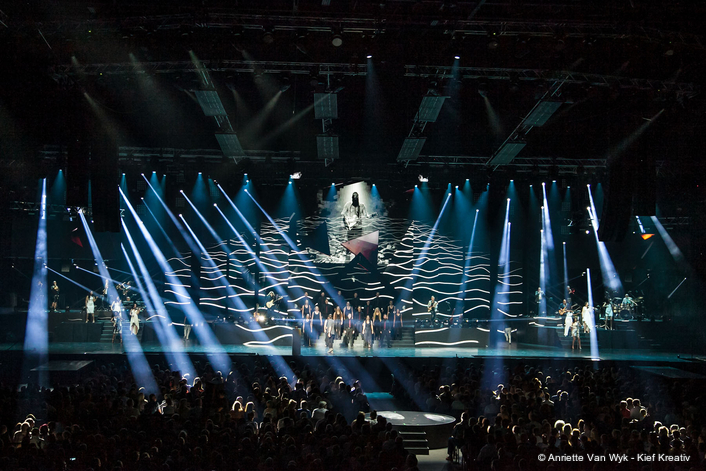 AIG is a flagship for MGG as a company, and this year’s spectacular performances including flying an aeroplane and a motorbike, with several artists who took to the air, plus tracking LED screens and moving trusses all adding to the fun, fantastic production values and overall visual extravaganza.

Joshua had over 650 Robe moving lights in the rig. His Robes included MegaPointes, Pointes, Spiiders, Squares, Spiikes, LEDWash 600s and 1200s, LEDBeam 100s and 150s and a range of BMFLs, all combined in another show-stopping design. 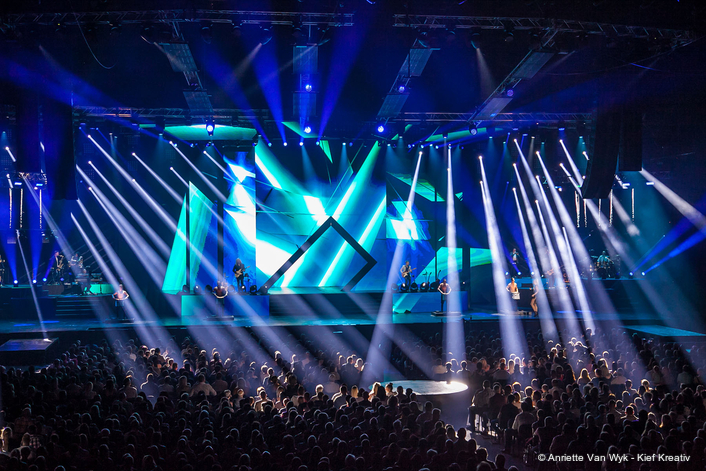 The set was designed for the client by Corne Roodt from Verita with MGG supplying the main deck structure!

A re-scaled version of this AIG show – to fit the venue – will be staged at the Grand West Arena in Cape Town in March. 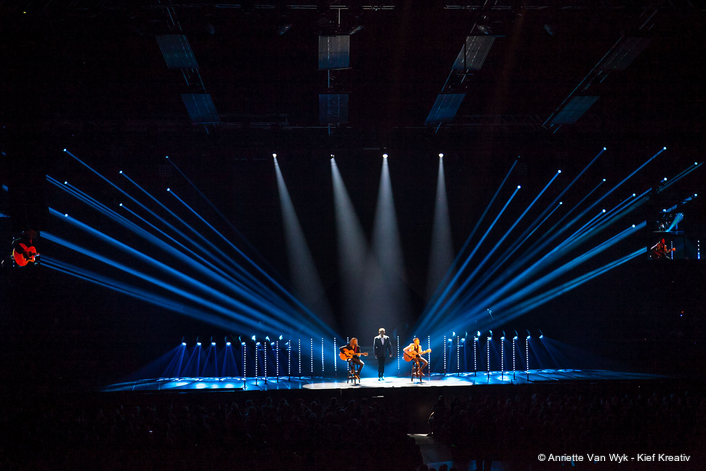 Block Party was a New Year’s Eve rave and dance event with a line-up of some of South Africa’s finest DJs and music producers, also staged at Sun International’s Time Square Sun Arena in Pretoria, showing its adaptability as a performance space.

Lighting was designed by Werner van Wyk, who utilised the full in-house lighting rig, which is substantially Robe orientated. He supplemented this with some additional Robe moving lights to ensure it was a memorable occasion for the 8,500 revellers in there celebrating the rollover of the decade. 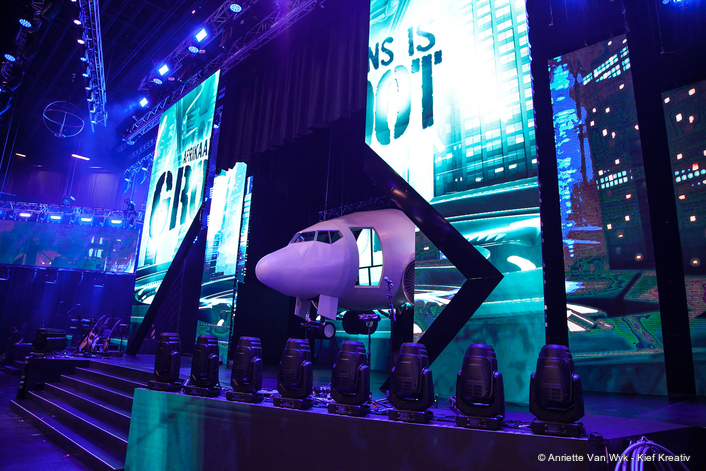 The Robe count of 94 lights was a mix of BMFL Blades and WashBeams, Spiiders, Pointes, LEDWash 1200s and LEDBeam 100s, all running from a grandMA2 light console.

The MGG team used the house LED screen and added LED behind the two DJ booths, which were run in ‘flip-flop’ festival style to ensure there were no breaks in the music and the audience stayed energised between 6 p.m. on 31st December through to the  wrap at 6 a.m. on the first of January 2020!

Lighting was designed by Jacques Pretorius and included Robe MegaPointes, LEDWash 600s and 1200s along with some Robe PATT 2013s which he positioned to the left and right of the LED screens to fill the gaps and adding flourishes of décor with their elegant retro brushed metal dish shaped reflectors. 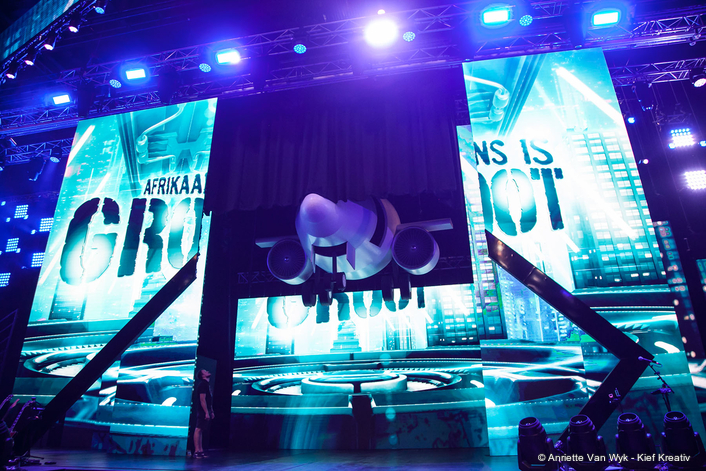 It’s the first time MGG has been involved with this event which was staged at the highest point in Mossel Bay, right on the coastline. Fantastic for views on one hand and notorious for unpredictable weather on the other, the biggest challenge for all crew working on site was contending with high winds, rain and dust at various points.

Denzil points out that the Robe fixtures were “rock solid” through all this erratic meteorology!

Just down the road in Hartenbos, another MGG crew and more lighting kit were in action for “In Afrikaans” another outdoor stage with a range of leading Afrikaans artists and music. The five shows ran across the last 10 days of December with the final one on New Year’s Eve.

The LD was Johan Ferreira (well-known as the main stage LD for SA’s largest festival, Innibos) and a big Robe fan.

His design for In Afrikaans 2019 included Robe LEDWash 600s ,1200s and LEDBeam 100s, programmed and operated by Johan together with a bunch of other lights on a grandMA2 light console.

Simultaneous to these four events happening, MGG also supplied lighting and 100 more Robes for an exclusive internal awards event staged by a well-known telecom brand in their own HQ and venue in Johannesburg.

LD Pierre van Wyk – a regular freelance LD with MGG – squeezed the Robe fixtures - and some more - into the space … all of which just about emptied the MGG warehouse and kept all their regular crew busy at a crucial time of the year.

“It’s been one of our most successful Decembers ever,” stated Denzil.

After a short period to draw breath in January, MGG owner and MD Mark Gaylard and the team are looking forward to what’s already promising to be a busy year ahead!