“A digital wireless system that is all about performance” 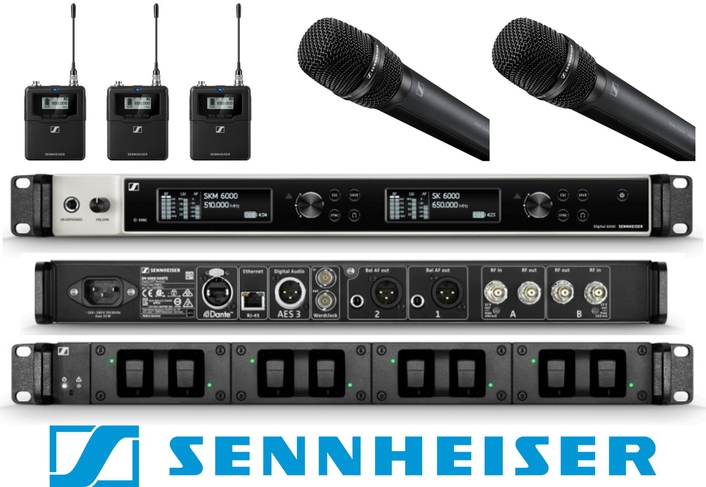 Tom Vollmers, product manager at Sennheiser: “Digital 6000 is a wireless system that is all about performance. It brings the benefits of the Long Range mode of our benchmark Digital 9000 system to a two-channel receiver, while allowing the use of standard UHF antennas and existing Sennheiser capsules or microphones. Integration into analogue and digital workflows is seamless, and the fact that frequencies can simply be placed in an equidistant grid will help users in congested RF environments a lot.” 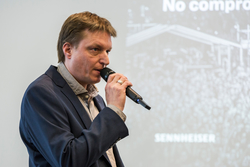 The Digital 6000 series comprises a two-channel receiver that is available in two different versions, a bodypack and a handheld transmitter, and a rack-mount 19” charging unit. The receiver’s switching bandwidth of 244 MHz (470 to 714 MHz) is covered by three transmitter versions (470 – 558 MHz, 550 – 638 MHz, and 630 – 718 MHz). Up to eight receiver units can be daisy-chained without the need for an additional antenna splitter; the multi-channel system will work with a single pair of antennas. System latency is 3 milliseconds.

Digital 6000 is compatible with Digital 9000 in long-range mode and with the EK 6042 digital/analogue camera receiver.

Superior reception, reliable audio
Reliability has always been a hallmark of Sennheiser wireless systems, and Digital 6000 is no exception: true bit diversity, transmission error correction and additional intelligent error concealment make this a system to rely on.

If, as in difficult RF environments, the signal should get temporarily corrupted to such an extent that the transmission error correction can no longer repair it, the intelligent error concealment of Digital 6000 sets in. It employs intelligent learning algorithms to replace the corrupted part, enabling Digital 6000 to still transmit flawlessly where other digital systems fail.

For data security, a feature that is particularly important for conference and corporate use, Digital 6000 features switchable AES 256 encryption, with the transmitters also supporting the proprietary encryption of the Digital 9000 system.

Uses existing infrastructures and accessories
Digital 6000 has been designed to keep additional investments as low as possible: Existing antenna infrastructures can continue to be used as the system works with standard active and passive wideband UHF antennas, with the highly frequency-selective input filters being contained in the EM 6000 receiver.

The Digital 6000 transmitters use the same high-performance rechargeable accupacks as their Digital 9000 counterparts. The SKM 6000 handheld transmitter features Sennheiser’s standard capsule interface – it can therefore be used with any microphone head from the evolution wireless Series, the 2000 Series, and also with the special 9000 Series heads. 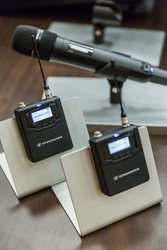 The SK 6000 bodypack excels as a high-end solution for wireless instruments such as guitar and bass – or is ready to use with a variety of Sennheiser clip-on microphones and headmics. These include the MKE 1 and the digital-transmission versions of the MKE 2 and MKE 40 clip-on microphones, plus the SL Headmic 1 and the HSP 4 headmic as well as the upcoming digital-transmission version of the HSP 2.

Ease of use for the engineer
In addition to making it possible to plan frequencies simply in an equidistant grid, Digital 6000 is fitted with an automatic frequency set-up function to make the job of the monitor engineer or dedicated RF engineer easier. As usual, the Sennheiser Wireless Systems Manager (WSM) software can be employed to control and monitor the wireless system.

The receiver’s operating controls have been modeled on the well-known EM 3732 to ensure straightforward operation. A new, user-friendly menu control with a bright, white OLED display gives a quick overview of the RF signal, link quality, audio signal, battery status, frequency, transmitter name and encryption. Several home screens provide easy access to further information, without the user having to navigate through submenus. Critical operating conditions and error messages are directly indicated on the display. 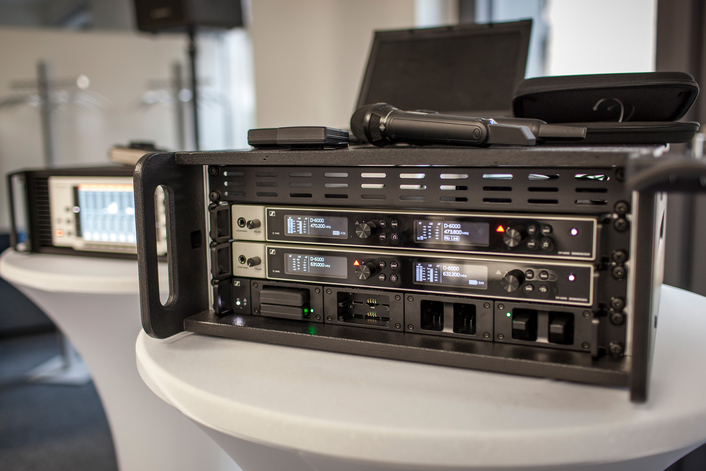 Smart charging solution
The series’ L 6000 charging unit is a 19”/1U mainframe device that can be fitted with up to four charging modules as required, each of which recharges two bodypack or two handheld batteries, respectively. Three-coloured LEDs on the front panel give a quick overview of the charging process for each battery, while two additional LEDs monitor the device status. More detailed information as well as additional parameters such as battery runtime, charging cycles and remaining capacity can be accessed via the Wireless Systems Manager. The L 6000 charging unit can also be used for Digital 9000.