The Silent Disco audience found downloading the MobileConnect app easy and the application straightforward to use, with most people opting to use Sennheiser Momentums instead of their own headphones because of their superior sound quality

Organized for the first time this year, Slush Music took place in the Finnish capital of Helsinki. Its aim was to enhance the dialogue between tech entrepreneurs and music, with its exciting setting being an additional draw. Part of this unique event’s offering was its Silent Disco, where Sennheiser’s MobileConnect technology provided a very personal experience.

Held on November 30th and December 1st, Slush Music is the music and tech exclusive vertical of Slush, which started in 2015 and has been described as ‘Burning Man meets TED. It gathered 1,500 industry professionals, including over 80 speakers, for an exchange of thoughts about exceptional ways to push music forward with technology.

The intense agenda of Slush Music featured topics including global music consumption, the revenue distribution of streaming and the revolutionary aspect of using blockchain technologies for music. Among the speakers were exceptional artists such as Imogen Heap (Mycelia for Music, MiMu Gloves) and Ulf Ekberg (Ace of Base), who is now an investor at Norvik Ventures, and industry leaders including Paul Pacifico (AIM). There was also representation from successful organizations combining music and tech such as Spotify (Eva Lægdsgaard Madsen), Deezer (Julie Knibbe and Mathieu Molinero) and Musimap (Vincent Favrat).

The first day ended with a Day 1 Afterparty, featuring the Silent Disco held at The Cable Factory in Helsinki, the largest cultural centre in Finland, and featured Finnish DJs Rony Rex, Lil' Tony and Windows95man and Finnish trance music duo Super8 & Tab, which proved so popular it was full two hours after the doors opened, leaving a queue of hundreds outside.

“We decided to partner with Sennheiser because of its excellence in equipment for the music industry” says Sasu Paakkunainen, Head of Partnerships at Slush Music. “I contacted the Finnish office and had meeting with Patrick Ihalainen, who demonstrated the MobileConnect and TeamConnect among other technical leaps from Sennheiser. After this session, I wanted to showcase MobileConnect in Slush Music. Our initial idea was to use it only at the day program, but during the production, the idea evolved to the add a Silent Disco to the Afterparty of Slush, which became the main event for our partnership.”

MobileConnect is an innovative Wi-Fi based technology, which enables low-latency transmission of audio content to mobile devices such as smartphones and tablets.

“The biggest difference between MobileConnect and other solutions is that you don’t need anything other than what most of the audience carries with them anyway,” says Sasu. “Slush is all about making a remarkable, high quality experience for the audience travelling from abroad to freezing Finland. Investors, startups, music industry and media are interested in innovative ways to utilize handheld devices and this was something I wanted to showcase in Slush Music this year.”

MobileConnect systems can be combined via standard network switches and integrate seamlessly to work in a similar way to a single unit, both for the configuration interface and for the listeners.

The initial idea for the event was to integrate the MobileConnect on to the existing public Wi-Fi being built for the Slush Music event, but due to technical limitations this was not possible. The solution was to build a standalone Wi-Fi infrastructure to handle the expected number of listeners and, even though the airwaves were heavy congested with as many as 38 other Wi-Fi access points, the MobileConnect streams performed flawlessly. 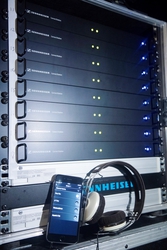 Eight MobileConnect systems were combined to provide a capability of up to 400 clients, streaming a maximum of 32 different audio channels. For the Slush Silent Disco, the system was configured with just four audio channels to supply the audio from four DJs for up to the stated 400 listeners.

An audio channel layout was set up in the MobileConnect app interface that made it easy for the listeners to select between the DJs without having to worry about which system had free available streams.

Slush’s technical provider SunEffects, network provider Sonera and Sennheiser built the systems well in advance to make sure that everything would work as promised, with all channels named correctly and good quality audio available to the audience as soon as the DJs started playing.

“When I got to the venue in the morning of the event, everything was plung’n’play ready and the Wi-Fi was easily accessible and connected,” Sasu continues. “Our source signals went through the mixer, so I had three headphone jack inputs for the day program sources and one main PA out as another source.

“We had only an hour to change the day program to the Silent Disco. Sennheiser’s Jonas Naesby made all the changes needed to MobileConnect and the DJs, working with SunEffects and Red Bull, built the stage for the disco. All the headphone jacks were replaced with four DI boxes for the DJs connections. Once again, it was simply plug’n’play.

“The eight systems worked flawlessly,” says Sasu. “They daisy chain nicely inside the app and when one system reaches capacity it doesn’t crash or leave you with nothing. It gives you a pop up alert and you join the next channel of streams. The eight systems were more than sufficient for us as we had a maximum capacity 300 people for the space.”

A one hundred and fifty Sennheiser Momentum On Ear headphones were also provided for those people who had not brought their own headphones with them.

Six volunteers and the Sennheiser crew were available to help anyone in the audience that needed it. 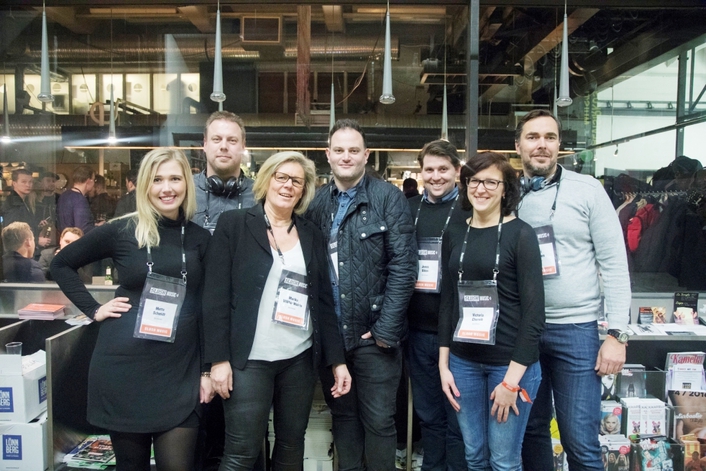 “We had hoped to do a presentation on the stage before we starting the Silent Disco, but the queue was so long that once we opened the doors, people ran in and went straight to the headphones and DJs had to start their performance – of course. The space was packed in about 10 minutes, but it went very smoothly,” recalls Sasu. “We had trained the volunteers to train the audience. I personally trained four volunteers and it took about a minute to show them how the app works and that was enough for them to start helping anyone in the audience that needed it. Downloading the app is very easy and application is very straight forward once you connect to the MobileConnect Wi-Fi and open the app; you just select your channel, you see all the DJs and you’re set to start partying.

“The Silent Disco as a part of Slush Day 1 Afterparty was a huge success and we’ve had lots of good feedback from it. As well as the MobileConnect system, kudos should be given to Sennheiser for joining forces with Red Bull to provide an awesome line up of DJs.”