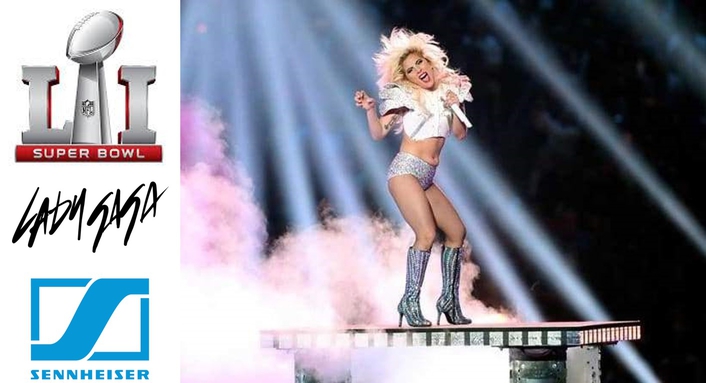 Households across America and around the world were on the edge of their seats on Super Bowl Sunday as the Atlanta Falcons vied for their first Super Bowl win against the storied New England Patriots. 111.3 million viewers tuned in for the contest, all the way through to its stunning overtime conclusion. During an electrifying halftime performance, Lady Gaga performed through her trusted Sennheiser wireless microphone system, melding music from her own catalog and other patriotic classics.

Lady Gaga, who participated in the Super Bowl 50 festivities last year by singing the The Star-Spangled Banner before the game, once again chose a classic, reliable combination that has been a staple in her high-profile performances: the Sennheiser SKM 5200 handheld transmitter and an MD 5235 dynamic microphone capsule. Beginning the performance atop the highest heights of NRG Stadium in Houston’s rim, she performed excerpts from “God Bless America” and “This Land Is Your Land“ with Sennheiser capturing every nuance of her naturally dynamic voice — all before diving towards the stage in a feat of wires and acrobatics. Once on stage, she launched into a medley of her top hits.

Down to the Details

Lady Gaga’s production manager Chris Vineyard worked with the artist in crafting the remarkable spectacle that was her 12-minute performance, which included elaborate staging, stunts, and dance routines. But high-quality sound remains at the center of a fantastic Gaga show, and the Sennheiser MD 5235 capsule and SKM 5200 transmitter also performed exceptionally well as she delivered her performance to millions of viewers worldwide. “Sennheiser was really the easiest part in this whole process,” Vineyard says. “We’ve been using Sennheiser microphones for the last eight years and they perform well every time. Knowing that we could rely on Sennheiser left us with some extra headspace to focus on putting on a great show.”

Perhaps Lady Gaga’s front-of-house engineer Paul Ramsay knows better than anyone how the artist’s voice sounds on the MD 5235 capsule. Having used the capsule extensively on her tours, he was confident it would once again give him exactly what he needed for both the in-stadium and broadcast mixes. “When I came onboard Lady Gaga’s team, I was pleased to discover that they were using Sennheiser microphones and wireless gear because the last two artists I’d worked with were on Sennheiser as well and we had great success,” Ramsay explains. 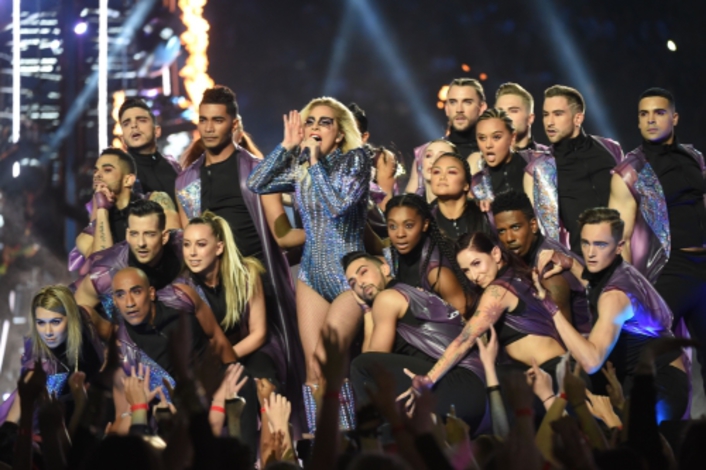 For Ramsay, the MD 5235 capsule has its clear advantages: “That capsule really suits her voice. The high end is articulate and the low end has a nice warmth to it.” Dynamic detail is important to capturing the artist’s performances, as she covers a wide range of volumes in her vocal delivery. “She can go from nearly a whisper to quite powerful and loud within a millisecond, and that mic handles it beautifully and captures every facet,” he says. Ramsay also noted the capsule’s excellence in rejecting off-axis sound from the band's backline, the PA system, and the roaring crowd, allowing quieter passages to be lifted without an obvious increase in bleed.

Ramsay, who had helped establish the core stadium PA mix during a rehearsal before handing it off to an engineer with production partner ATK Audiotek, was fully hands-on with the broadcast mix during the live event. “With over 100 million tuning in at home I’m mixing for quite a large audience,” explains Ramsay, who also mixed the Super Bowl half-time show back in 2010. With five weeks of rehearsals under their belt, Ramsay and everyone else involved had a clear playbook for the big day — yet Ramsay is always ready to make an adjustment on the fly if needed. “I know her voice and how she sounds on the Sennheiser mic, so it’s easy for me to find the areas where I can make adjustments to dial in the sweet spot.”

Lady Gaga, who is appreciated for incorporating eye-catching visual elements into the presentation of her music, worked with Sennheiser to design three visually arresting customized designs for each of the three microphones used at different points in the performance. The Super Bowl 51 performance included one that featured a metallic wrap with the word “UNITY” engraved in it, a leitmotif of the performance. “The Sennheiser team was incredible and really bent over backwards to make sure we had everything we needed technically and aesthetically for this show,” says Vineyard. “We have a great relationship both with the company and with the gear itself from years of working together.”

Navigating as dense a wireless environment as the Super Bowl is no small feat, but the Sennheiser SKM 5200 transmitters and EM 3732-II receivers were up to the task. “RF is an enormous challenge with an event this size, and the production has Lady Gaga covering a fair amount of ground with staging, but the Sennheiser wireless gear really held up,” says Vineyard. He and Ramsay also complemented the work of production provider ATK Audiotek and wireless experts Professional Wireless in ensuring smooth management of the crowded RF environment, enabling steady operation of their Sennheiser transmitters.

“Every last bit of RF channel was being used either by broadcast or some other application, so it all had to be carefully plotted out,” Ramsay explains. “With ATK and Professional Wireless keeping the RF stable, we can rely on the Sennheiser transmitters and receivers to get clean audio. And in truth they never fail.”

Though the New England Patriots came back against what would seem like long odds to claim another Super Bowl victory, Sennheiser was the one predictable element at this year’s game. “It is always a pleasure to work with an artist as inspiring as Lady Gaga and in doing so play a part in the excitement of the Super Bowl half-time show,” says Byron Gaither, Sennheiser artist relations manager. “Our team put their heart and soul into making sure that both the artist and her staff had the right equipment to deliver a memorable performance, and we are pleased that our equipment helped make the experience great to an audience of millions.”