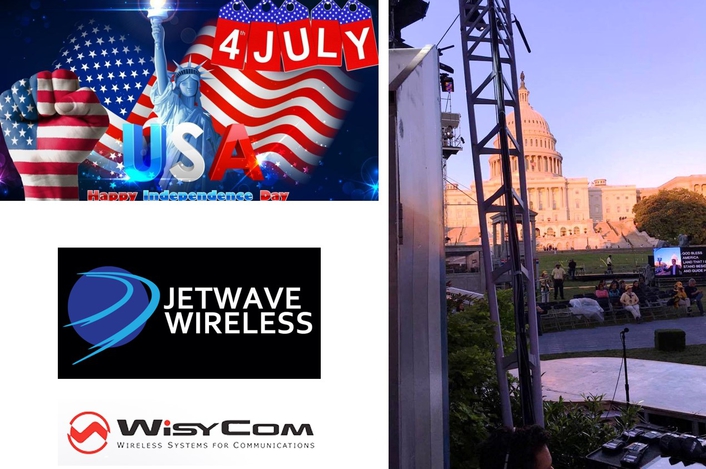 Each year on July 4th, Americans all over the country gather with family, friends and fellow patriots to celebrate the birthday of our great nation. A long-standing tradition is America’s favorite Independence Day music and fireworks celebration that takes place at the National Mall in Washington, DC. Wisycom products were deployed by JetWave Wireless to provide interference-free coverage throughout the event, presented by Capital Concerts. The celebration, which brought hundreds of thousands to the nation’s capital, was also watched by millions on PBS.

“For any event requiring a Distributed Antenna System (DAS), we never leave home without the Wisycom MAT288 Programmable RF Combiner,” says Dave Martin, RF Technician, Jetwave Wireless. “This is an unbelievable tool for deploying a DAS across a large site, such as the Capitol. The versatility of the MAT288 allows us to quickly accommodate surprise coverage requests from production with ease, quickly deploying a new stage or camera shot without any issue. Paired with the Wisycom MFL Optical Fiber Link, we are able to provide coverage to far areas as if we were using copper cabling. The MFL is a transparent link providing RF-over-Fiber (RFoF) and remote control of the system that is completely unrivaled in the market today.”

Hired by Capital Concerts, Jetwave Wireless has been providing RF Coordination and DAS for A Capitol Fourth for the past three years. The company manages all wireless microphones and in-ear monitoring systems, while also providing overall event frequency coordination and coverage for wireless devices across multiple stages, including the main stage on the Capitol’s West Lawn, the Grant Memorial Stage at the Reflecting Pool and the Terrace on the Capitol steps.

For the musical portion of the event, Martin and his crew had many sponsored artist riders to cover, including Shure and Sennheiser gear. The MAT288 was used as the ‘head’ of the system. Several pairs of antennas covered the main stage and satellite stage in the crowd. Martin also used two pairs of MFL’s to manage the Capitol steps and the Grant Memorial stage. With the MAT’s four diversity outputs, he fed 30 channels of mics, mixed between Sennheiser and Shure. Additionally, eight channels of in-ear monitoring was distributed around the venue and via the MFL to the Grant stage. By using Wisycom RF distribution products, Martin was able to provide interference-free coverage everywhere.

Wisycom is a great addition to Jetwave’s DAS deployments. In the past, Jetwave would build its own receive antenna combiners, transmit distributions and even its own fiber system for each project. While these devices got the job done in the past, they provided little control of system gains, status and remote control. In the more recent deployments using Wisycom gear, Jetwave networks every device in the system, allowing for control of remote site devices. While this not only allows for an extreme level of control down to each antenna, this also reduces time running back and forth between the head- end and remote sites to tune the system. All of this can now be accomplished through a single computer from the comfort of the stage.

“The distribution products we use from Wisycom are easy to deploy and allow for some of the best RF coverage I have ever seen,” continues Martin. “With an MAT288, I can provide 100 percent microphone coverage over a massive area quickly and without too much work. When combined with the MFL, the system’s reach goes even further. I find the MFL to be the best RFoF system available for production environments. The MFL is built from the ground up for this application. It’s very clear to me, that after years of using it, that it will continue to be the absolute best tool for the job.”

Without Wisycom’s MAT288 and MFL providing centralized coverage for this show, Martin’s needs would require almost twice the inventory of wireless microphones. Wisycom allows the talent to use the same microphones anywhere on site, while also keeping the mixers jobs simple by keeping the talent on the same faders. 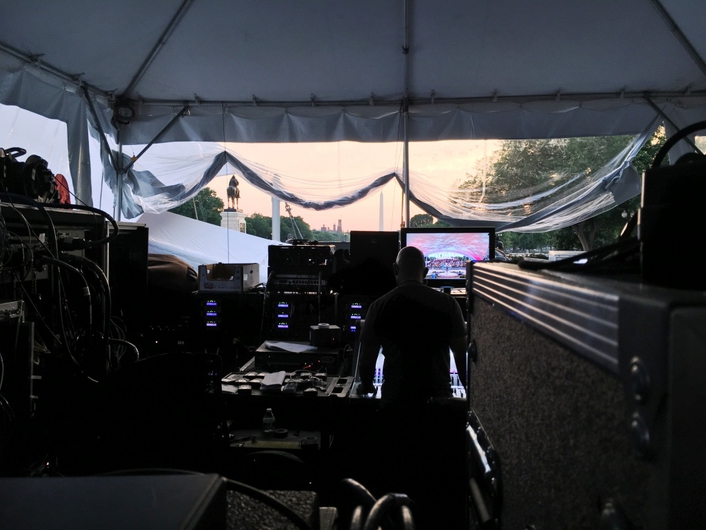 “We maintain a very close relationship with Wisycom both in support, and also in product development/life cycle,” says Martin. “The amount of labor savings alone from having control of the remote site via our LAN setup on-site gets us excited to use Wisycom. This event was another success, thanks, in part, to Wisycom. Its distribution gear is the only gear we use for deploying DAS in both live events and fixed installs.”