The Danish broadcaster is capturing live political debate from inside a Tesla electric car, which has been transformed into a remotely operated studio

The interviews are all conducted inside a Tesla electric sports car, which was first deployed by TV2 during the country's recent election campaign. This highly innovative mobile studio is entirely unmanned by TV2's technical staff and is operated remotely from the broadcaster's studios in Copenhagen.

Morten Brandstrup, head of News Technology at TV2, says: "We introduced the Tesla mobile studio during last year's election coverage because we wanted to present political candidates in a different environment. Initially it was used for the programme Udfordringen (The Challenge) which ran every day during the three weeks prior to the election. On each day we paired politicians of different political persuasions and had them talk to each other live to air while they drove the Tesla around the country. They knew that every word they said could be heard, but being in a car rather than a studio made their conversations much freer and more unexpected."

"We carried out some acoustic testing with DPA consultant Eddy B. Brixen and the Tesla turned out to be a great environment for recording voices," Brandstrup says. "Thanks to the directional quality of the microphones the audio was perfect, which was really important because Udfordringen is a talk show and we wanted audiences to hear the politicians clearly without the distraction of background noises."

The Tesla SP85C, which was chosen for its green credentials as well as for it overall looks, is capable of accelerating from 0-100 kmh in 3.3 second and can cover more than 400 km on one battery charge. As well as DPA microphones, the car was fitted with four cameras, internal lighting, four transmitters and 16 4G modems. Although the director was able to control the technology externally, the car was also fitted with a small live production set up consisting of a video and an audio mixer, which was located in the boot. 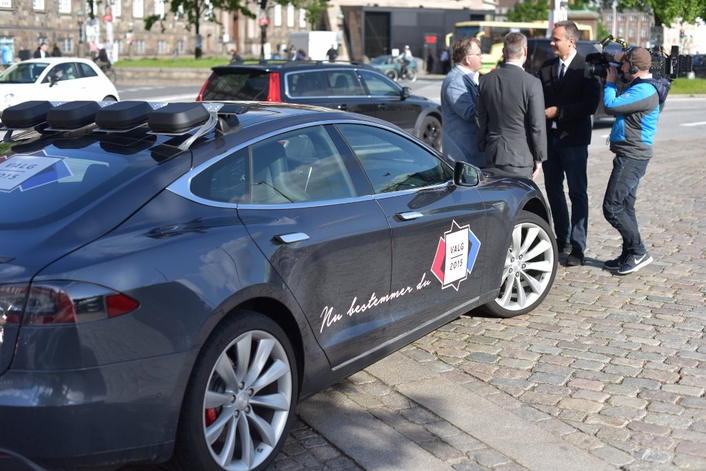 "Using the Tesla as part of our election coverage allowed us to push technology in a new direction," Brandstrup adds. "Our aim was to show how much we could do with an IP and 4G connection."

The studio in a car concept was so successful that TV2 has kept the Tesla on the road for its weekly political programmes.

"Creating a studio in a car and letting politicians drive around without any journalists or technical crew present takes reporting to an entirely new level," Brandstrup says. "When you have two people sitting in a car they naturally start to talk to each other and that's what makes this space so special for interviews and debates."