AVIWEST, a global provider of video contribution systems, today announced that TV2 Denmark, a publicly owned television station based in Odense, used the company's digital mobile newsgathering solution for the delivery of live broadcast transmissions during the recent general election coverage. AVIWEST's DMNG PRO180-RA video uplink system, with a new IP Bridge function, was utilized by the broadcaster as part of a mobile live production studio hosted inside a Tesla P85D electric car for the station's news program "The Challenge," where two politicians debate on a current political issue while driving. AVIWEST's solution allowed the equipment in the car to be remotely controlled from the station's news production control room, streamlining operations while enabling TV2 Denmark to deliver a high-quality live broadcast.

"The concept for 'The Challenge' was quite revolutionary, and so were the challenges. We needed a digital mobile news gathering solution that is compact and dependable at transmitting live video, while offering seamless control from our headquarters," said Morten Brandstrup, head of news technology, TV2 Denmark. "We chose AVIWEST's solutions because they are known for being reliable, portable, and easy to use, making it easy to stream live HD-quality video over 4G networks. Given the success we had with this on-the-go studio, we plan on using the AVIWEST systems for future press conferences, small studio set-ups, and multi-camera productions." 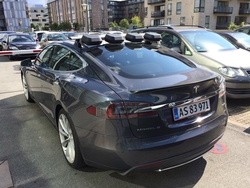 The Tesla car was connected to TV2 Denmark's infrastructure via 16 4G modems and did not require any technical help within the car to control the equipment. At the news production control room, TV2 Denmark operators were able to seamlessly edit and cut the camera feeds received from the car, as well as adjust sound and lighting, to produce high-quality broadcast programming.
The AVIWEST system installed in the Tesla car consisted of two AVIWEST DMNG PRO180-RA video uplink systems connected to a Blackmagic Design ATEM television studio video mixer, six GoPro cameras, and four AVIWEST QUAD wideband antennas, which were installed on the roof of the car to enable better signal transmission. The systems were connected to an AVIWEST DMNG Studio receiver, decoder, and distribution application back in the TV station's master control room. Using the new IP Bridge function of the DMNG PRO180-RA, TV2 Denmark could remotely control the ATEM video mixer, allowing for multi-camera production on the fly. The DMNG PRO's compact, lightweight, and portable form factor made it an ideal choice for use within TV2 Denmark's mobile production studio.

AVIWEST's DMNG Studio receiver was installed back at TV2's news production control room. The Linux®-based server supports multiple output formats, allowing for point-to-point and point-to-multipoint video distribution. After accepting video signals from the ATEM studio mixer, the DMNG Studio server enabled streaming to the cloud, providing TV2 Denmark with a centralized video hub and interface, in addition to a receiver.

"We are used to seeing politicians debate on television. But not in the spontaneous nature in which TV2 Denmark was able to capture it with its mobile production studio," said Erwan Gasc, CEO of AVIWEST. "TV2 Denmark really pushed the boundaries of traditional newsgathering, and we are thrilled that our sophisticated DMNG technology helped them deliver high-quality HD coverage of the event."