Robe at the #LightSARed Campaign 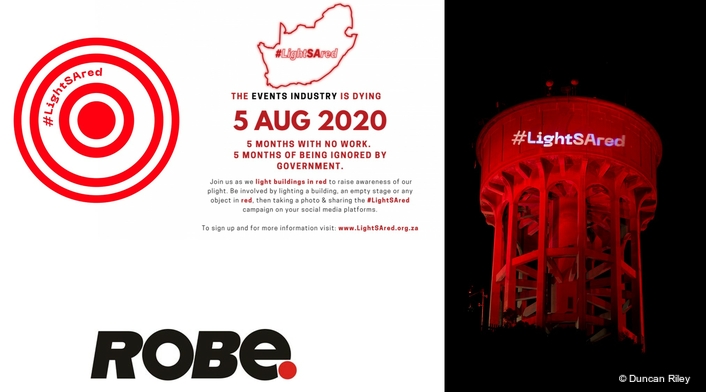 The South African entertainment industry unified en mass for their August 5th#LightSARed ‘Code Red’ activation …  to shout out the critical state of the live entertainment industry and its support infrastructure, which has had no work, no cashflow – and no meaningful government support – for 5 months since mass gatherings were banned on March 15th due to the Coronavirus pandemic. Over 500 buildings, structures, monuments, venues, spaces and places all over the country were lit including the side of Cape Town’s most famous natural landmark Table Mountain. Robe moving lights were used on many of the installations, and the various action was coordinated by project teams in major cities including Johannesburg, Cape Town, Durban, Free State, Port Elizabeth, East London and Kimberley. Industry friends and colleagues from neighbouring Namibia also enthusiastically joined the action.

Under a month ago, #LightSAred was initiated by Duncan Riley of DWR Distribution and quickly gained momentum and support from The Southern African Communications Industries Association (SACIA), the Technical Production Services Association (TPSA) and the SA Events Council.  Duncan and Sharif Baker, chair of the TPSA, energised a wide range of industry sectors including rental and production companies, venues, artists, promoters, agents, technicians, producers, directors and creatives working across all disciplines for this hugely successful consciousness-raising event. 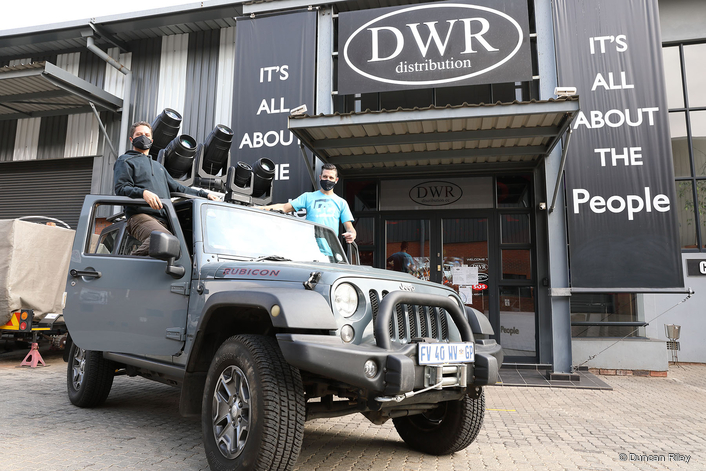 A continuous livestream – an idea initiated by DJ and music producer Dino Moran – and broadcast by SkyRoomLIVE from virtual studios at MGG in Johannesburg and the Solid Group in Cape Town – was streamed on multiple channels during the day highlighting and debating key issues facing the industry and its basic demands from government.

Various technical production and live event spokespeople were joined at one stage by Collen Hlatshwayo, deputy director for cultural development in event technology from the Department of Sports, Arts & Culture (DSAC) who could hear first-hand the immediate concerns.

His presence was the result of a communication sent to government the day before, requesting a discussion on finding solutions for the events sector. The DSAC acknowledged this, then the following day Collen Hlatshwayo met with Sharif and others for a round table discussion and was also interviewed on the #LightSAred stream.

The campaign is demanding: 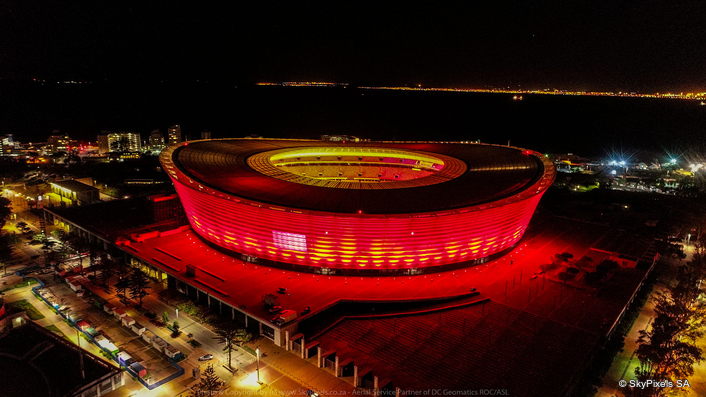 Heart of the Movement

Right at the heart of this movement and the push to get national media and government attention was Robe’s South African distributor DWR, a company passionate about the industry and all the talented and amazing people who make it rock.

On the night, Kavir Magan and DWR marketeers Nicole Barnes and Sherryn Riley had their fingers on the social media pulse, furiously posting and re-posting which had a phenomenal response as the installations started going live in the evening. One Eyed Jack and Amplicon PR were responsible for attracting the attention of the mainstream media.

Of the 500 red buildings, Robe moving lights were used on a significant amount of them – due to the brand’s prevalence in SA and the need for powerful light sources with amazing colours. 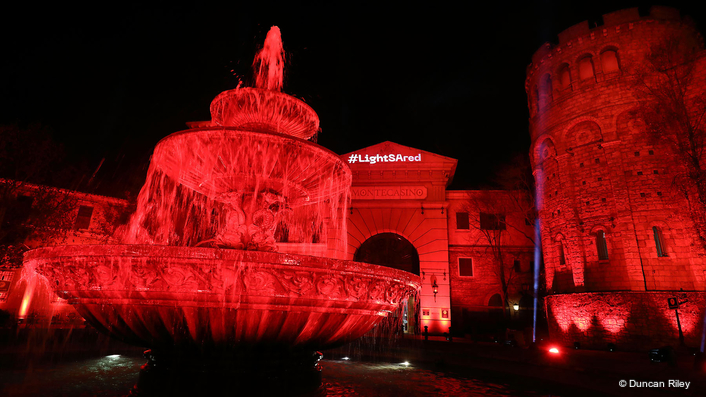 MGG’s Studio A was used for the Johannesburg segments of the livestream where the lighting rig comprised six Robe DL4S Profiles, 16 x LEDWash 600s and four PATT2013s.

Table Mountain was lit red by crews from Gearhouse’s Cape Town branch, who boldly trekked up the mountain with giant red coloured gel frames and covered all the lighting ‘pits’ containing the landmark’s permanently installed fixtures.

However, the coolest Robe installation of the night was arguably on the top of DWR’s Bruce Riley’s Jeep Rubicon … designed to give mobile ‘illumination support’ around the vast Johannesburg area on an “as and when needed” basis.

With a specially modified rigging system designed by father and son team Keith and Tyler Pugin, two BMFL WashBeams and two MegaPointes were secured to the vehicle’s roof rack, together with a RoboSpot Motion Camera for control.

The passenger seat was removed, a RoboSpot Base station fitted in place that could be operated from the back seat, and with a 10KVA generator being towed, Bruce behind the wheel and Tyler poised at the RoboSpot control, they set off to light the town red!

They assisted in lighting several landmarks including the amazing Northcliff Water Tower perched up at 1807 meters on the second highest point in Jozi with stunning views of the city.

For #LightSARed, Northcliff Tower became a beaming red beacon visible from all over the Johannesburg valley, lit with two Robe Tarrantulas located at its base and with its standard permanent white light fixtured gelled red for the occasion.

For the top part of the tower, Bruce and Tyler parked up 300 metres down the hill and shone their mobile lighting rig up, enveloping the whole structure in red and beaming the #LightSARed logo around the top. 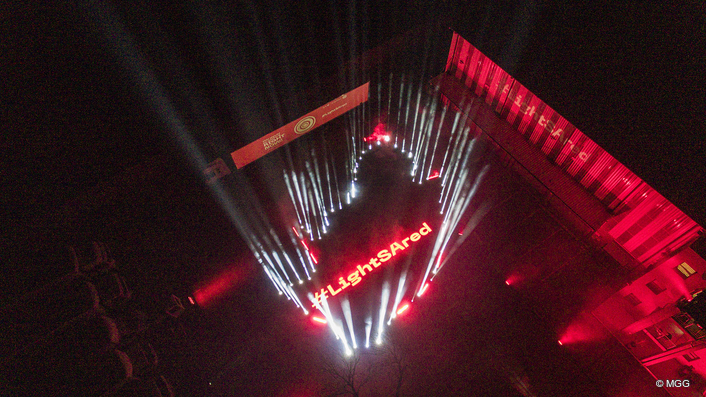 Apart from these, there were a host of other fantastic projects activated during the evening and everyone enjoyed great camaraderie and the excitement of doing what they love … working and making events happen.

Sharif concluded, “The entire experience was surreal. Even the next morning, I thought, ‘Wow, did we really do that?’” 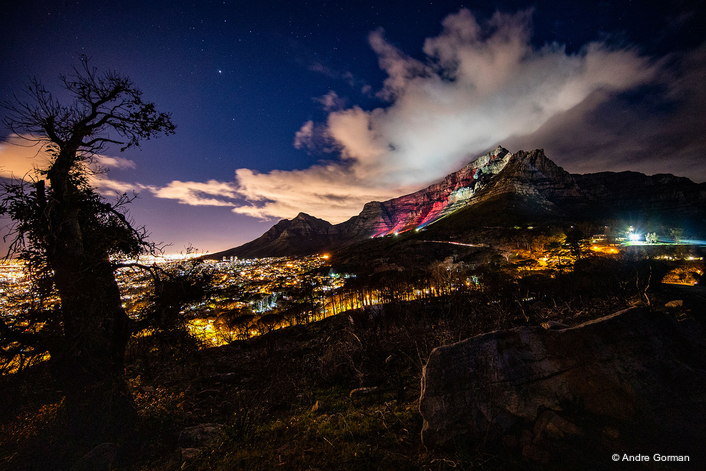 He also confirmed that the DSAC now acknowledges “our existence as the technical production and live event industry, is aware of our cause, our requests, and is undertaking to engage in a consultative process geared to developing a strategy and ensure that the sector does not cease to exist during this difficult time.”