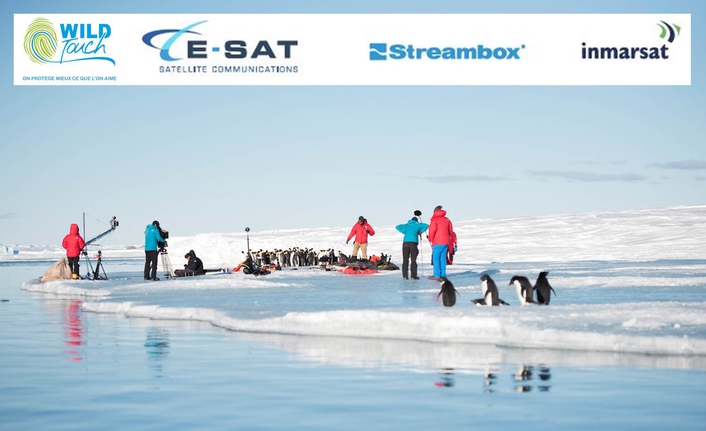 Luc Jacquet & Wild Touch
Luc Jacquet is an Academy Award Winner and French wildlife film director known for his 2005 documentary, March of the Penguins. In 2010 he founded Wild Touch, a non-profit organization aiming to showcase the fundamental importance of protecting the planet and its resources. 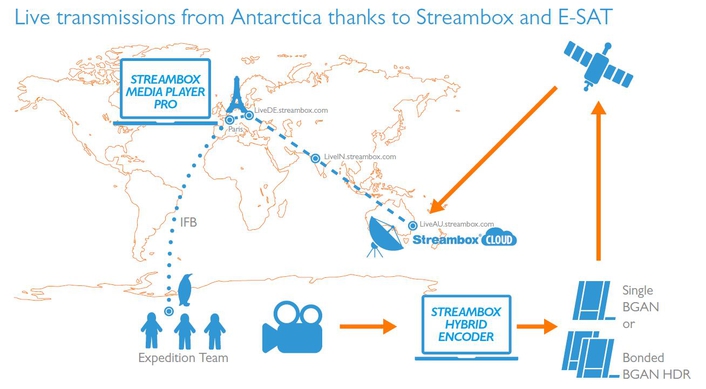 Wild Touch approached E-SAT to provide reliable solutions that could bring satellite connectivity for the Expeditors Team. The Expeditors wanted to communicate to viewers exactly what they were seeing and experiencing, to share the wildlife pictures and videos with people worldwide and more precisely, have an impact on the COP21 conferences.

Due to the context, E-SAT suggested to use Cobham Explorer 710, a robust and reliable modem. The Explorer 710 offers the possibilities to separate the antenna from the transceiver and can be mounted on an external pole mount, up to 100 meters away with the optional antenna cable. This setup is ideal in the context of Antarctica due to the very low temperatures. Furthermore, Explorer 710 is an ultra-portable and easy to use satellite terminal which includes features such as High Data Rate, bonding, Wi-Fi and high-speed.

This service offered a good capacity at an affordable price. Later in 2015, the Wild Touch Team decided that they would like to achieve live broadcasts as well. Unfortunately, Inmarsat BGAN Link is not compatible with Streaming IP which is compulsory for doing Live. The offer moved forward towards an Inmarsat BGAN HDR service.

Live Streaming from Antarctica
The question of a dedicated solution to realize the live broadcast was asked. Streambox® was offered as the ideal tool to answer this need, with both software and hardware options. Wild Touch chose the software encoders for practicality, as no additional equipment was needed and Streambox Hybrid Software Encoder could run on a laptop the team was already using for communications.

Streambox proved high-quality performance with BGAN terminals provides unrivalled video compression and quality at low data rates. To ensure a high video quality with a low delay, the connection bitrates were doubled (900kbps instead of 450kbps for one Explorer 710) by bonding two BGANs together. As the tests of the Streambox Hybrid Software encoder with the dual BGAN HDR systems were very successful, the decision to increase the amount of live broadcasts was made.

Before going to Antarctica, several tests had been made at E-SAT's office with the Wild Touch technical team. It consisted on computers settings, using BGANs, validate quality control tests and optimizing transmission settings over Streambox software. Thanks to these preparations, the team in Antarctica had everything ready when needed.

There was a risk but thanks to the team's efforts, Wild Touch succeeded in broadcasting Live from Antarctica. 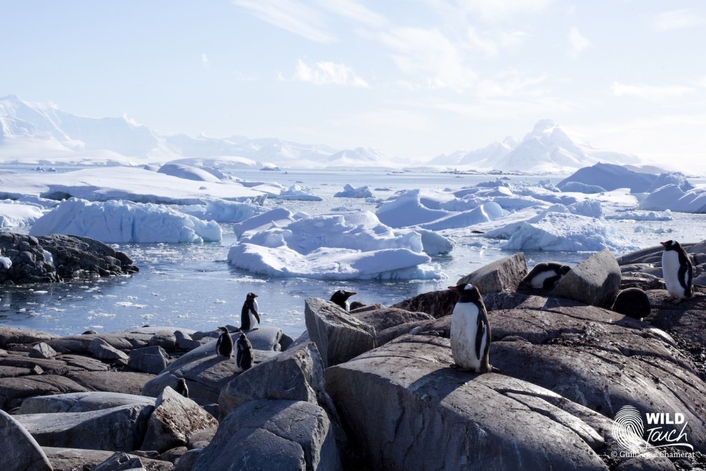 In the end, Wild Touch took 5 SIM cards and 3 Explorer 710 units. One Explorer (with a BGAN Link 30 GB SIM card) was used by the Team and stayed in the local technical room, the second Explorer 710 was a travelling one, equipped with a Full HDR SIM card. The latter was to ensure the Live broadcast and allow the Team to permute the 3 other SIM cards.

"We were extremely pleased to see the strength, reliability and broadcast quality of our bonded BGAN HDR service demonstrated during this live broadcast from Antarctica - the first ever from the region to use the service. Pairing our services with the Streambox software encoder makes a powerful end-to-end broadcasting solution that's robust enough to perform well even in the most remote and challenging of environments" -
Daniel Cooper, Head of Media, Inmarsat Enterprise

In regards to broadcast solutions, two Streambox Hybrid Software encoders running on OSX MacBook's that the Team took to the expedition - one for travelling and another as a backup solution, if needed. Without a dual BGAN HDR and Streambox Technology, the live broadcasts wouldn't be possible at all, as the Team was located in a very low connectivity area. 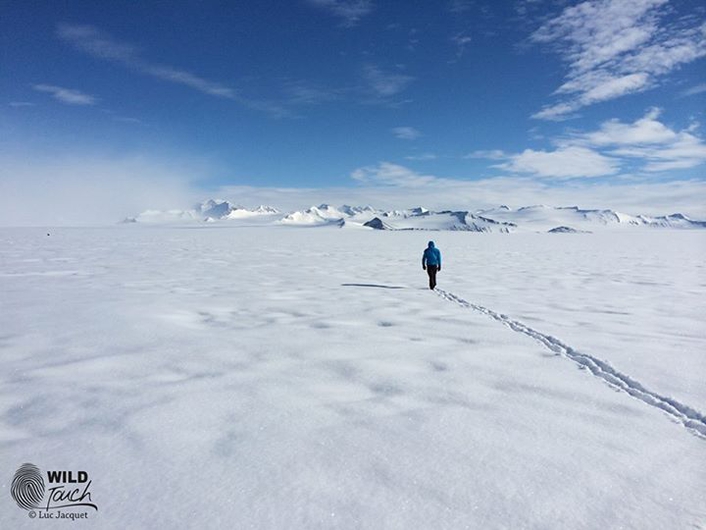 Wild Touch was also able to pass by locked connections and avoid other technical challenges during this project. Redirecting the transmission through the Streambox Cloud to the Media Player Pro software decoder, allowed to output HDMI/SDI in closed networks. Streambox Cloud Service is a reliable cloud-based live video management solution that delivers the highest-quality and low latency video over any public or private IP network. Its easy routing features allowed to simplify the workflow and achieve an exceptional video quality for the conditions that were faced.

The Expedition and Social Media
Wild Touch and its partners have also been highly active on social media through the hashtag #RejoinsLaColonie to engage people worldwide to support their fight against climate changes. This social engagement enabled people from all over the world to see images of Antarctica's wildlife displayed at the building's facade. Another successful social media conversation occurred through the hashtag #LiveAntarctica, which enabled followers to ask questions which the Expedition team answered Live on the Wild Touch website.

In total, nine live broadcasts were scheduled around December's Climate Conference. On Friday, December 11, Wild Touch produced a live session on their website engaging directly with their followers on Twitter. Thanks to the satellite and video solutions that have been deployed, Wild Touch succeeded and was the first one to do a successful live broadcast from Antarctica using Inmarsat's BGAN HDR and Streambox encoders. 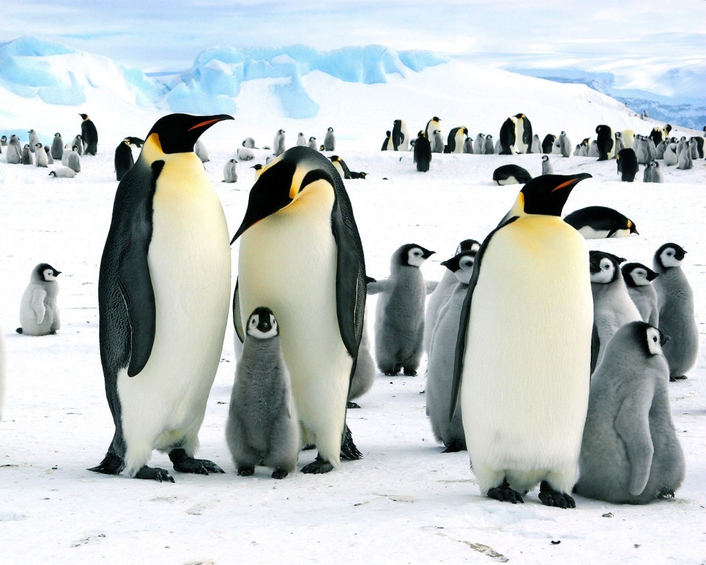 "Our goal was to share with all the communities our work and what we were able to do. What we realized from Antarctica with those devices has shown our expertise, sometimes better than big productions," said Romain Martin- Rossi, Wild Touch's Director of Communications.