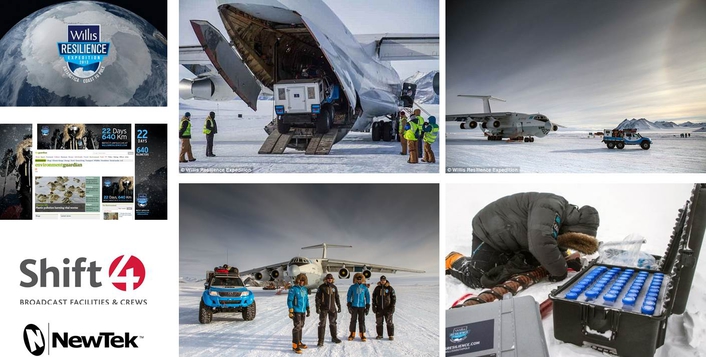 19 year old adventurer Parker Liautaud is aiming to set a new world speed record for a journey from the Antarctic coast to the South Pole. The expedition will also collect snow samples and weather data for environmental studies. To tell this amazing story to the world, content marketing agency Captive Minds contracted Shift 4 to provide MCR (master control room) facilities in the studio that the agency has designed and built in the foyer of global insurance giant Willis Group’s London headquarters. 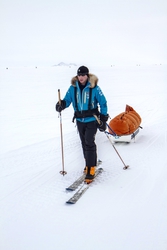 Willis Resilience Expedition TV – named after the expedition’s backers – will use the TriCaster to produce a live 60 minute show each day for 16 days during the expedition, with a magazine-style format including live updates directly from Parker, reporter-led environmental news stories, news analyses, and studio debates involving leading climate scientists, environmentalists and government figures.

Programming will feature live video and audio satellite feeds from the custom-built expedition support vehicle in Antarctica which is following Parker on his mission, together with video from three Sony PDW-F800 HD cameras in the studio, previously edited VT material, on-screen graphics, and Skype calls from global contributors.

Each 60 minute live show will be mixed in the TriCaster and streamed to Willis' YouTube channel, and will also be uploaded each day to www.willisresilience.com to be viewed on demand. The TriCaster‘s additional outputs will supply Willis' internal network as well as a large screen situated in the Willis building. The finished programmes will be shared online with Willis HQ in the US for re-versioning and content will be streamed to Willis' media partners all over the globe.

Alex Trezies, Managing Director, Shift 4, said, “For a live show like this, when there is only one chance to get it right, we know we can rely on TriCaster. It gives us all the inputs and outputs we need, plenty of graphics and effects, automation and built-in live streaming, with an intuitive interface. TriCaster enables us to produce professional quality programming that fits our clients’ budgets.”

Josh King, Senior Vice-President, Group Marketing and Communications for Willis, commented, “We have an exciting journey to share, and an important issue to discuss, with viewers around the world who are focused like us on how companies, places and people can become more resilient. The team at Captive Minds has helped us to tell this story and have this conversation in a richly creative and technologically-advanced way with the largest possible audience.”

Simon Greenwood, Series Producer for Willis Resilience Expedition TV at Captive Minds commented, “I am excited by this opportunity for a televisual examination of the impact of climate change. We are indebted to Willis for having the ambition to make it happen. It hasn’t been easy building a large, fully soundproofed studio to operate in a working reception area. The team has been hand-picked for a task that will require cool, calm heads.”

To set a new world record, Parker Liautaud must average around 18 miles (30km) a day for 22 days, facing temperatures between -28°C and -60°C while towing his 82kg equipment and supply pulk (sled). If successful, he’ll become the youngest man ever to accomplish the feat.

The unique geography and topography of Antarctica has led to scientists dubbing it a “global thermometer” for the study of climate change and Parker – himself a passionate environmental campaigner – will spearhead a significant new study. He will take frequent snow samples at varying depths, enabling scientists to examine records in an area uncharted since the 1970’s. He will also carry an innovative, lightweight weather station – capable of relaying meteorological data every 30 minutes.