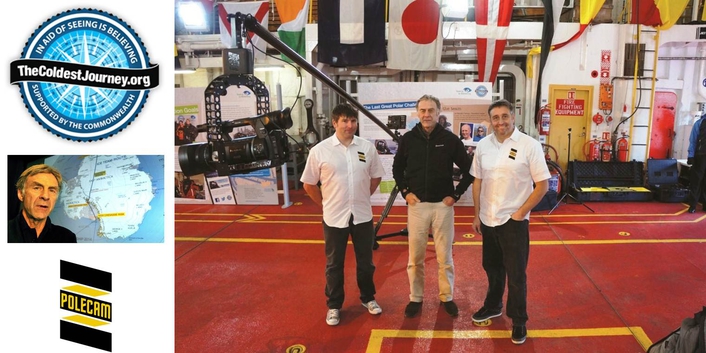 Polecam delivers rig to Sir RanulpFienne
Polecam systems delivered a Polecam rig to Sir Ranulph Fiennes and his expedition members on board the research ship 'SA Agulhas ' at its River Thames mooring in London recently before it left on the first leg of its journey to Antarctica.

The Polecam will be a great addition to the other cameras on board the boat. Not only will it give increased production value to what they already have, but be able to provide some unique perspectives of interviews and training on board, the loading and unloading of all the equipment, and the documentation of the expedition's progress. The whole production team are very excited about using their 'new toy'. The Polecam, fitted with the new Polecam Long Head, will be mounted with a Panasonic HPX250 P2HD camcorder.

After a short stopover in Cape Town the ship will sail to the ice edge in Eastern Antarctica, arriving mid January 2013 where the team will set up their base.

The veteran explorer will take on what many consider to be the last true remaining Polar challenge by attempting to cross Antarctica in the depths of winter. The six month expedition is being called 'The Coldest Journey', and will see the team of six crossing around 2000 miles, mostly in complete darkness and in temperatures as low as -90 degrees C. The expedition is looking to raise US $5 million via fund raising for 'Seeing is Believing' with Standard Chartered providing dollar for dollar matching to take it up to $10 million.

On the 21st March 2013, they will begin the six month journey sailing on from South Africa to reach the Ross Sea. Their Polar journey from the Russian base of Novolazareskaye ('Novo') to Captain Scott's base at McMurdo Sound, via the South Pole, will test the limits of human endurance.

Previously the furthest any expedition has ever ventured into Antarctica during the winter is 60 miles. The six man team, led by Sir Ranulph, will have to be entirely self-sufficient. There will be no search and rescue facility available, as aircraft cannot penetrate inland during winter due to darkness and risk of fuel freezing.

The expedition will also provide unique and invaluable scientific research that will help climatologists as well as forming the basis for an education programme that will reach up to 100,000 schools across the Commonwealth.

Seeing is Believing
A fund raising global initiative will run side by side with the expedition with the aim or raising US $10 million for Seeing is Believing (SIB) - a global collaboration between Standard Chartered Bank and the International Agency for the Prevention of Blindness (IAPB) to tackle avoidable blindness in developing countries.

Polecam Systems
Polecam Systems is the company today that has grown from the early days when extreme sports cameraman Steffan Hewitt designed and built the first Polecam rig for himself to use, and when others saw what it could achieve, they wanted one themselves.
Polecam’s attraction has always been a winning combination of portability, speed of rig/derig, adding production values without hassle, getting crane shots where no other crane could go, and getting right in to where the action is. Crane shots up a mountain, no problem. On a small boat, no problem.

Steffan has continued to develop and refine Polecam, never standing still, and today Polecam Systems offers a wide choice of ways to own a rig, from the Polecam Starter Pack, an entry level configuration that will take a DSLR or Black Magic Design Cinema camera right up to the full Polecam rig with 7th Heaven extended reach of 8m/26 feet.
There’s a whole range of cameras, heads, accessories, recorders, not to mention 3D, underwater add-ons and Extreme SloMo too.
Polecam will change the way you shoot and the way you think about shooting.