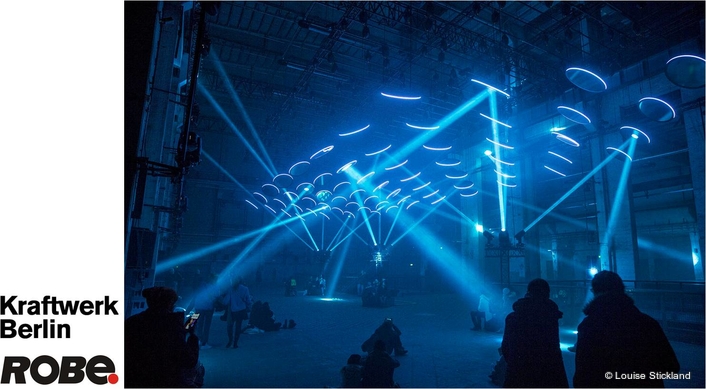 The edgy side of cool setting is Kraftwerk in Berlin – the still magnificent shell of a derelict power station that once electrified central East Berlin when the city was divided by cold war politics … impressive in scale, beautiful in rawness.

SKALAR juxtaposes technology and imagination in a cerebral dichotomy to engage the mind and soul in generating the very human reactions of profound emotions.
While Christopher’s conceptual starting point was renowned American psychologist Robert Plutchik’s ‘wheel of emotions’, his physical one was Kraftwerk itself. 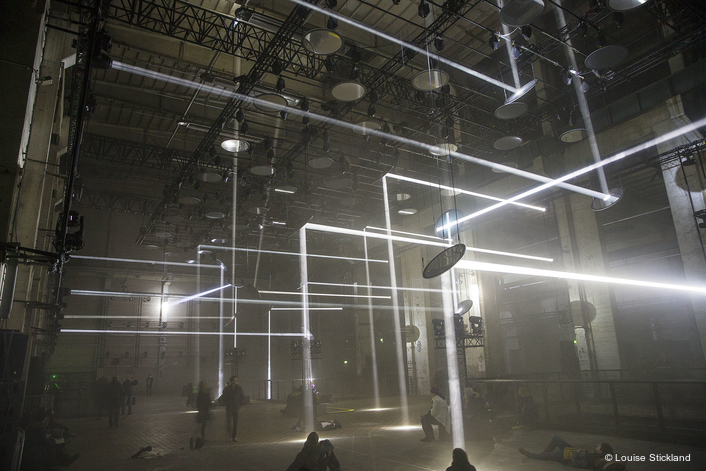 Working there a couple of years ago sparked the ambition to do something huge and exciting with light in the space. He felt the environment naturally lent itself to being honoured with a work of epic proportions!
SKALAR takes over the giant former turbine hall on the third floor which offers a 100 metre long by 40 metre wide performance space … with 25 metres of headroom.

Almost out of the blue, the opportunity presented itself when Kraftwerk’s event team were in touch to say that the venue was available for the month of February! The short lead time at that point - November - galvanised Christopher into a plan of action and SKALAR was born.
The idea was also to premier some inventive engineering projects - a bespoke winch system and show control software - on which he’d been working with his company Kinetic Lights.

His other company, creative design practice WHITEvoid has produced the event, with all the technical production and equipment sourcing also co-ordinated via Kinetic Lights.
When the project was energised, Christopher already knew he wanted to use Robe Pointes as THE beam light to compliment and work with the mirror system. It was logical for him to approach Robe who were extremely keen to become a technical partner, delighted at the opportunity to align with an exciting and innovative project. 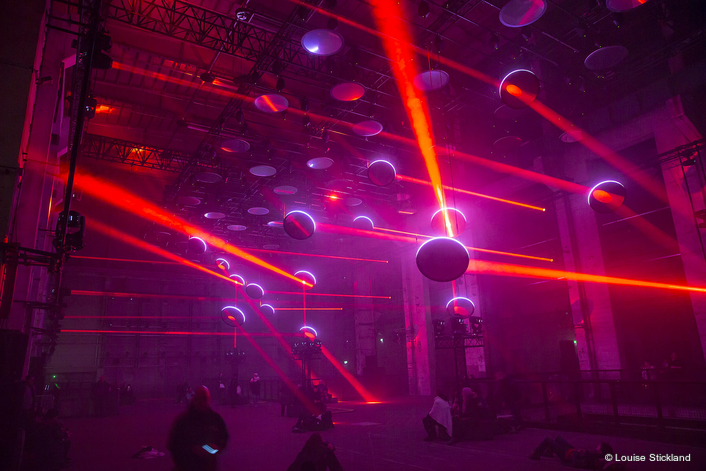 The self-commissioned work also partnered with the 2018 edition of Berlin’s annual CTM Festival for Adventurous Music and Art for its first week, but then ran-on for an additional three weeks.
Christopher and David Letellier (Kangding Ray) knew they would have to tailor the work exactly to fit into the building.

‘It’s not a place you negotiate with” explained Christopher, “The deal is that you take it on-board and treat it with the respect it deserves, find solutions for issues like reverb times and the special rigging required”. It was more like a privilege being able to work there.

In SKALAR, Christopher wanted audiences to immerse themselves in the sonic and visual world created by the installation … and feel direct emotional responses to the work … bearing in mind that each of these would be completely unique depending on the set and the setting – the essential personality attributes brought to the equation by each individual. 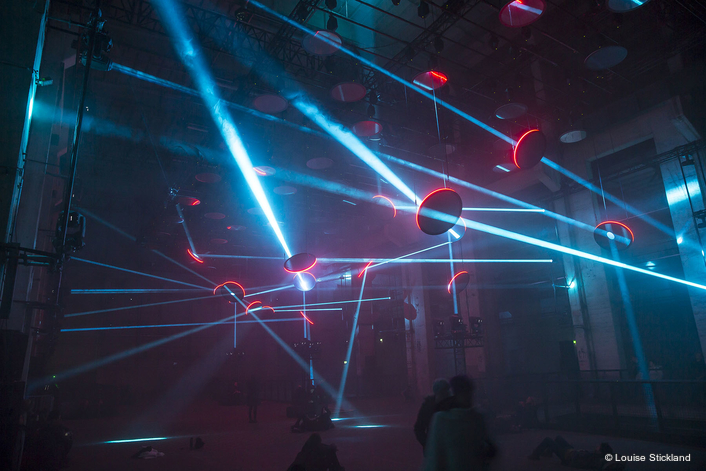 The mirror system is rigged in the roof of the space with the lights positioned all around on three sides – 75 Pointes are attached to the walls on ladders and 15 are on three totem trusses on the floor in the centre. This dynamic set up allowed Christopher to blend and bend the lighting in numerous different directions.
He was particularly interested in the relationship between the real beams coming from the fixtures onto the mirror and the virtual secondary beams being bounced between the mirror and the end points.

The different resonance and quality of the beams affects the perception and therefore everyone’s reactions and resulting sensory experiences.
Each mirror is controlled by three winches which give 7 metres of up / down movement plus pan / tilt, so they can move incredibly smoothly on XY and Z axes making their kinesys three dimensional and fluid. The mirror movement is controlled via ArtNet by Kinetic Lights’ proprietary KLC software platform and the whole system is networked.

When it came to selecting a lightsource, Christopher wanted something bright, precise and intense in output. He also wanted a dynamic fixture with many options to modify the beam as well as something small and accurate in terms of cue repeatability across the vast space. 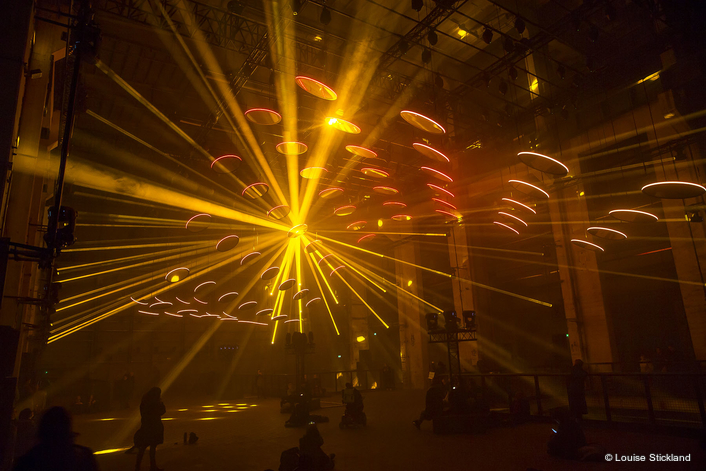 When he designed the 2017 closing party at trendy new superclub Hï Ibiza in the autumn, he was very impressed with the Pointes that Romain Pissenem and the Hï Scream team had used for the season, so when the Kraftwerk installation project started to evolve, this was his number one choice of beam light.

“In addition to the accuracy of the lighting cues we needed a light with highly calibrated colours that matched perfectly. It had to be quick moving, easy to handle and programme … and also readily available. This and the crispness and clarity of the light emitted by the Pointe made it perfect for this installation”.

The frost and the strobing function with its adjustable frame rate are also present in SKALAR, and in fact, most of the functions of the Pointes are utilized across the looped SKALAR show plus four special concerts. You can even spot some gobos in there, which are not used in the traditional way, more ‘incidentally’ to create volume in the space. 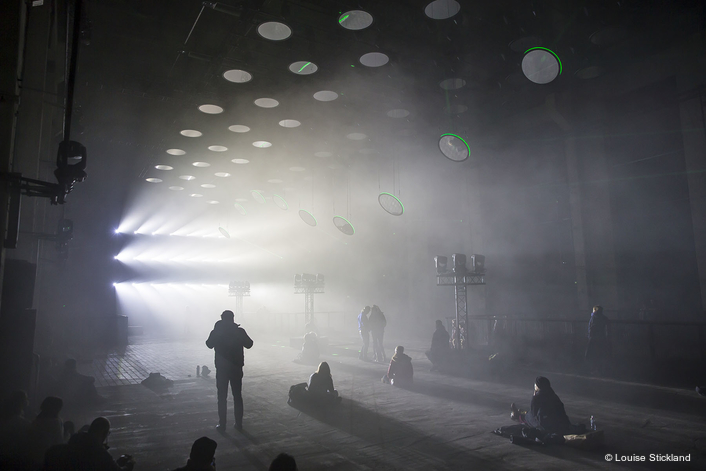 Their DMX data signals are converted from ArtNet and integrated into the KLC computer where Christopher and his team programmed a series of lighting treatments - from being heart-opening, playful, joyful on one end of the scale to dark, fragmented and angry on the other - which are rendered as cues in real-time during playback, triggered by MIDI keys from the Ableton Live system running the master track.

A storyline for the main 45 minute looped show moves through multiple textures and grades of emotional engagement. Only four of the eight emotions are actually involved in this show at any one time, and they are expressed in changes, lifts, drops, intensity shifts, etc. in the melody.

Christopher and David also perform four special SKALAR live shows where they are manipulating the sounds and visuals. These performances are more intense and use the expanded range of all eight emotions and the associated lighting and sound treatments. 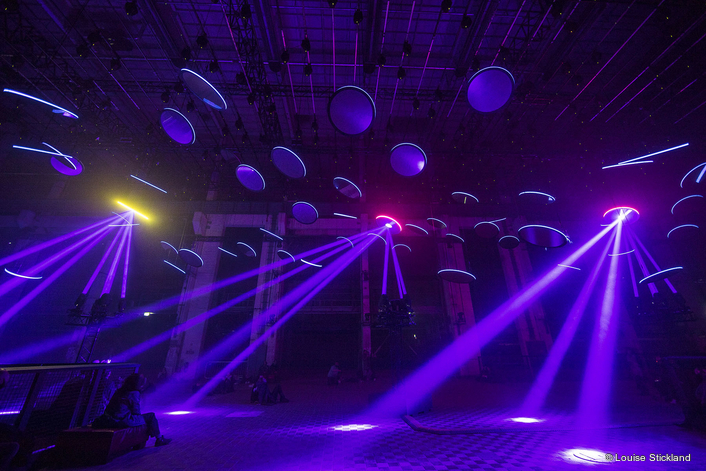 The results have been overwhelming. News of the installation initially spread virally via social media and word-of-mouth both internationally and locally around the city – a communication MO that appealed greatly to Christopher’s underground performance roots – and have also received plenty of attention in the mainstream media as people have flocked to Kraftwerk to experience the show which runs daily, sometimes for up to 10 hours.

The concerts have all been sold out … and SKALAR is another expression of the way light can be used to communicate positively with people in an entertaining if slightly abstract way. Not everything has to be obvious or linear!

The 90 Pointes were supplied as a dry hire to Kinetic Lights by rental company Motion from Feurth. The hazers were supplied by Look Germany, and the powerful L-Acoustics KARA / ARCS sound system came from Complete Audio. The roof flying detail was completed by Kraftwerk house riggers Satis & Fy, and the trussing to support the winch system was sourced from Lichtblick in Berlin. 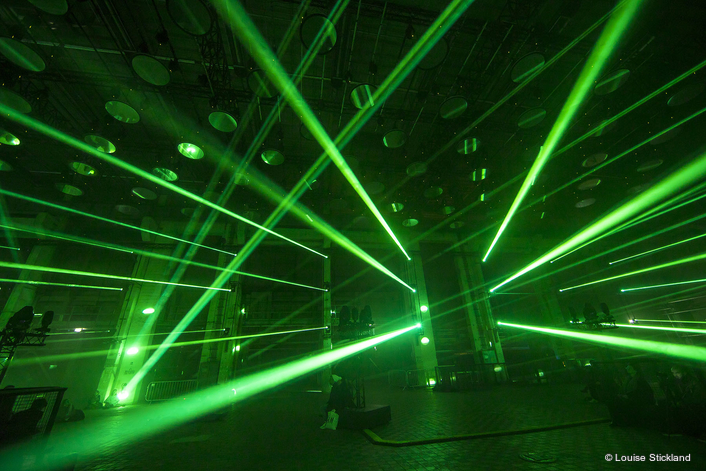 With SKALAR being such a success, Christopher would love to tour the work internationally … the idea of scouring the world for awesome industrial spaces in which to present it is just one of many elements he’d relish in sharing with a wider audience!
SKALAR continues until 25th February.

About Christopher Bauder
Christopher Bauder studied visual design at the Berlin University of the Arts, and is a prolific artist, designer and engineer working in the fields of light and installation art, media design and scenography.
He focuses on the translation of bits and bytes into objects and environments, and vice versa. Space, objects, sound, light and interaction are key elements of his work. In 2004 he founded multi-disciplinary art and design studio WHITEvoid, which specializes in interactivity, media, interior architecture and electronic engineering.

Christopher’s work has been seen at many international events and spaces worldwide, including the Pompidou Centre in Paris, MUTEK Montreal, the Fete des Lumieres in Lyon, The National Museum of Fine Arts in Taiwan and the National Centre for the Performing Arts in Beijing.

He is famously known for his unforgettable Berlin city-wide light art installation “LICHTGRENZE” – featuring 8000 light balloons - created in 2014 together with his brother Marc to celebrate the 25th anniversary of the Fall of the Berlin Wall. The helium filled light-balloons mapped out 15 Kilometres of the wall’s city centre footprint, and were released in a choreographed sequence to celebrate freedom, unity and the power of human spirit.