The main hub of the BBC’s 2015 Children in Need telethon was again Elstree Studios in Hertfordshire, where the marathon 7 hour live broadcast on BBC One united a glittering array of stars and a myriad of special collaborations all of which – along with thousands of activities taking place nationwide – helped raise an incredible 37 million pounds for the fundraising campaign.

Alex’s stunning studio set evoked fantasy images of both high-tech and retro fairground attractions and was based around multiple LED screens, surfaces and scenic decoration, with an impressive five-layered pros arch and many dramatic curves. It provided dynamic backdrops to the all action line-up with guest appearances from Ellie Goulding, Selina Gomez, Jess Lynn and numerous others,  plus lively ‘specials’ like the cast of maverick soap East Enders performing a rousing rendition of ‘Top Hat’.

He initially calculated how many areas of set would be required and then started curving shapes based around CIN mascot Pudsey Bear’s head, ears and arms, combined with the idea of fairground thrills like wavy rollercoaster tracks.

The S+H Animation cloth – featuring high density individually controlled LED pixels that can create low-to-medium images, video loops and flash animations – was wrapped around the perimeter of the studio, run via one of the lighting consoles and effectively linked the colour and movement of the content and images appearing on the screens and other LED surfaces. 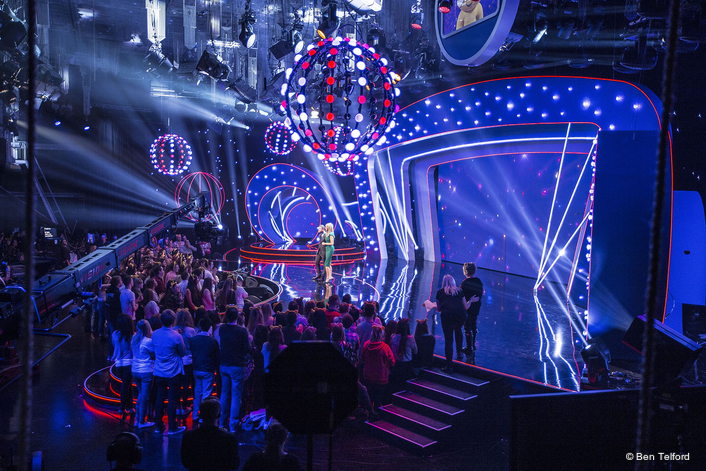 These ‘soft’ products also amplified the size of the set, particularly on camera – and gave a full 360 degree perspective – so it looked a lot larger simply by filling in gaps with a lightsource, an effect particularly noticeable on the wide and moving crane shots.

The starcloth was used behind some specific set pieces to create for those classic twinkling ‘magic’ television moments, of which there were many during the up-beat, lively show.

Fundamental to the overall design was the desire to create “A sense of excitement, occasion and also of scale” explains Alex, adding that he also had to keep things practical for staging the diversity of back-to-back show items, many lasting only  2 – 3 minutes, in which time presenter resets and other processes are also taking place around the set.

Keeping the whole environment energised and constantly changing was the major creative challenge across the broadcast which started at 7.30 p.m. and finished at 2.30 a.m. on the Saturday morning, complete with 600 audience in the studio, and several million tuning in to catch CIN on TV at various times.

Alex has worked with S+H on several other projects and comments, “The products are good, the crew are excellent and it’s always a hassle free experience. Apart from all that, (S+H MD) Terry Murtha always does a fantastic deal to fit the budget”.

Terry himself comments, “Children in Need is one of the most worthwhile and inspirational fundraising campaigns of the year and we are very proud to continue supporting it and being involved”. 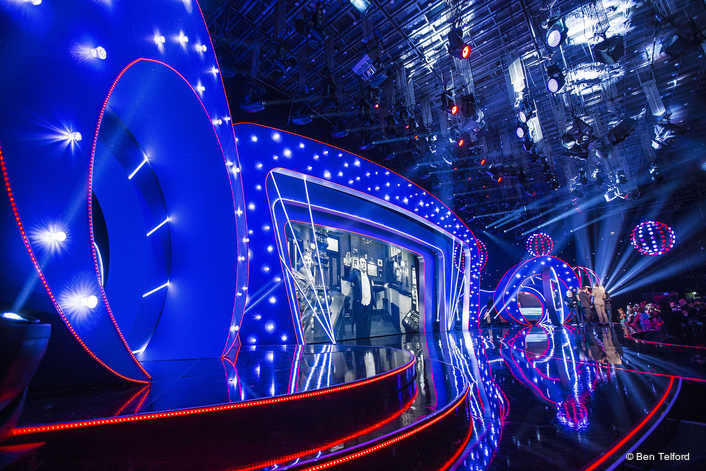 The 2015 Children in Need broadcast – the 35th anniversary of the appeal - was directed by John L Spencer, the show’s lighting designer was Gurdip Mahal and the executive producer was Paul Wright.