S+H Gets Its Act Together 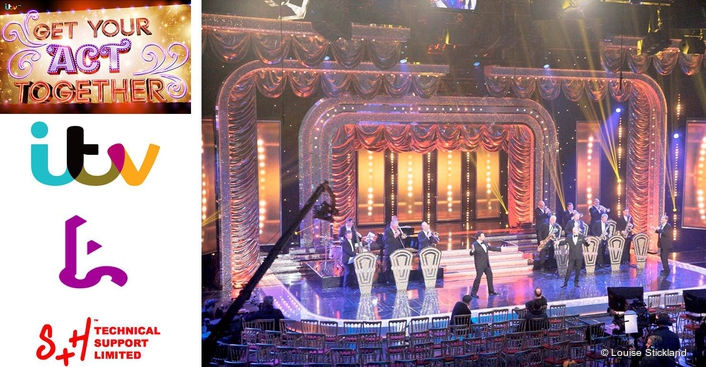 .
Drapes, soft goods and LED special effects specialist S+H Technical services supplied large quantities of silver lame draping for the series and final of ITV’s new ‘Get Your Act Together‘ talent show, where assorted celebrities had the chance to let their hidden talents shine by learning and polishing new skills … and performing live onstage.

The eye-catching set was designed by Patrick Doherty with whom S+H has a long standing working relationship featuring numerous other project collaborations. Patrick’s design was a nod towards bringing a touch of classic ‘variety’ nostalgia to the performance space … but with a contemporary twist. One ways of doing this was through the smart application of softs. 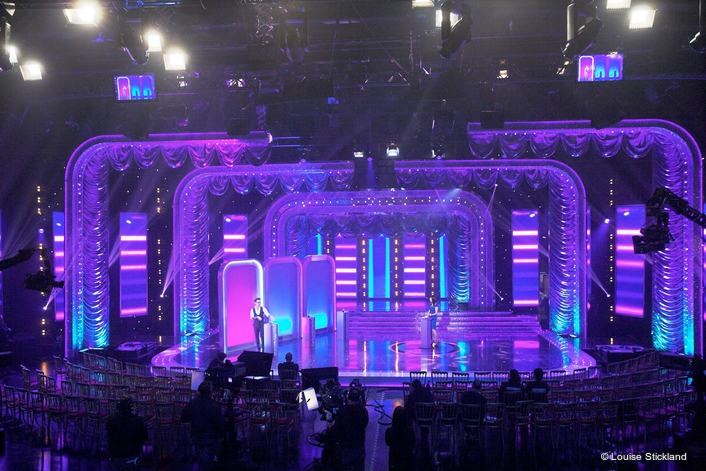 The set architecture was based around three shrinking perspective arches. The two larger (outer) ones were constructed using a steel structure with offset mirror and glitter interior, and a contrasting X-dome interior border, echoing the main central proscenium arch with the same detail. All structures used a vertical silver lame leg of drape combined with another vertical swag of silver lame, all of which were arranged in a series of sumptuous ruches.

Ahead of the series, Patrick and S+H’s Terry Murtha discussed the aesthetic requirements after which Terry arranged for samples of the ‘Liquid Silver’ lame fabric to be sent from J&C Joel for Patrick’s approval.

The silver material took light beautifully and was a hugely flexible solution as it allowed the space to become any single colour or different coloured or textured combinations, an aspect of the show on which Patrick worked closely with Lighting Designer, Peter Barnes.

“Using the silver fabric made the eventing more versatile and dynamic,” explains Patrick who was delighted with the results.

With five acts and six shows, Patrick had to create thirty completely different environments that looked great on camera. Each act had their own completely individual performance sets which were highly detailed and very effective, with the overall architecture of the silver GYAT set arches common throughout.

The centre arch was also fitted with an Austrian style reveal drape made from the same fabric which was used during some of the pre-recorded episodes.

Patrick wanted to add another layer of depth with something twinkly and slightly softer around the periphery areas, and so he contrasted the silver lame with a wrap around the studio – about 200 feet by 20 feet high - of S+H’s Pea-light starcloth.

The five episodes were recorded at The London Studio (TLS) on the South Bank and the live final took place at Fountain Studios in Wembley, which was a larger space. 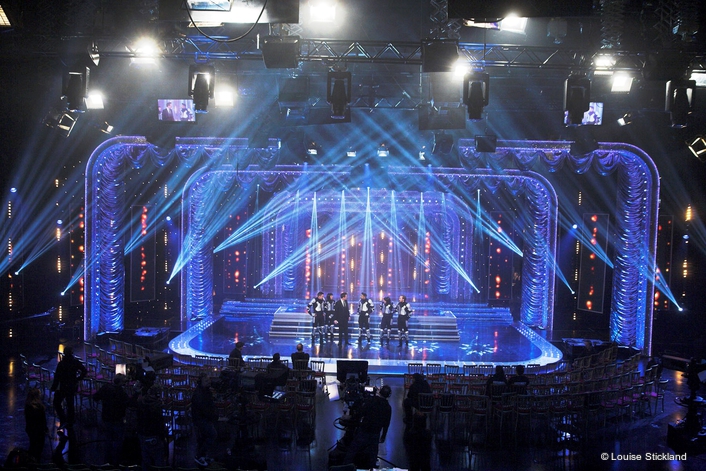 Some set elements had to be adapted for the final, and other modifications were necessary to facilitate easy backstage access for the super-quick two minute set changeovers required between the five live acts appearing onstage.

Terry Murtha comments, “It’s always great working on Patrick’s shows. His designs are refreshing and original, and there are usually a few challenges which need solutions – which keep us all on tour toes!”

The first season of “Get Your Act Together” presented by Stephen Mulhern proved very popular and was won by singer and Dancing On Ice champion Ray Quinn whose highly authentic quick-fire impressions … impressed everyone!

Get Your Act Together
The London Studios
S+H Technical Support