Royal Albert Hall Gets Spaced Out with Robe

London’s iconic Royal Albert Hall (RAH) venue purchased 17 x Robe BMFL Spot moving lights in February which have been used on a myriad of shows and events in the last few months including Space Spectacular, a co-promotion between the RAH and Raymond Gubbay Ltd., featuring the Royal Philharmonic Orchestra (RPO) conducted by Anthony Inglis playing a series of space-orientated works.

Lighting was crafted by the RAH’s Lighting Designer & Systems Manager, Richard Rhys Thomas, who used 16 of the BMFL Spots, 34 of the house Robe PARfect LED PARs together with  16 x LEDBeam 100s and 32 x Pointes which were hired in from TSL Lighting as part of a large rig. 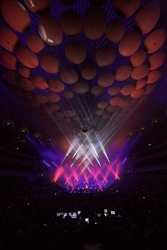 Richard has worked at the RAH since 2005 and managed the lighting department since 2008. He lights many of the shows throughout the venue’s busy year-round schedule and for this one, the design was based around the music, with the concept of ‘space’ a key to the process and inspiration for the way lighting was used.

Much of the show structure was in place by the time Richard came on-board and some of the pieces had been performed before and in other countries, but the overall look of the lighting was left to him.

It was based around the house rig, to which he added extra trusses rigged at different angles and populated with some of the rented kit.

The music comprised well-recognised popular pieces, and included masterpieces by Holst, Strauss and John Williams, whose themes for Star Wars, Superman, Close Encounters and E.T. were highlights of the two nights of shows ... with Darth Vader and his Stormtroopers even making an appearance!

The BMFL Spots were positioned on the main overhead trusses and were the primary profiles on the rig, used for string gobo looks and as for wash and effects lights as required. “The tight, bright beam and fast movement were essential to the show,” stated Richard.

The Pointes were grouped in threes on various angled trusses and on the deck to create big beamy looks shooting out and up into the vast height of the venue, as well as for creating wide and subtle break up looks.

The LEDBeam 100s were dotted around the orchestra and on the floor, utilised for air-effects and for a wall of colour emanating from the orchestra and reaching into the air. They are “Small and quiet enough not to disturb any orchestra members who had some difficult pieces of music to play at times,” commented Richard. In these floor positions they also broke up the large orchestra area as well as framing them very effectively. 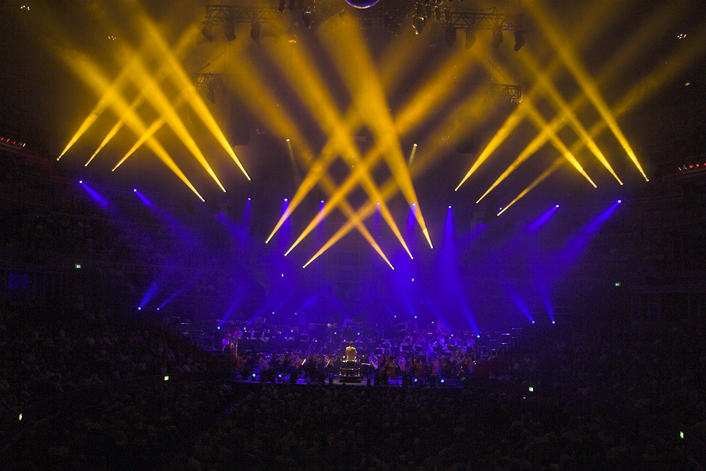 The PARfects were used to illuminate the RAH’s famous organ as a centrepiece as well as to catch the underside of the aluminium roof dome.

A serious creative challenge of lighting for the performance was to make each piece look and feel different and considerable time was spent listening to the music and selecting colour combinations and cues. Some very recognisable elements of the set called out for specific colours, but “Overall the rig was able to produce a huge number of looks and moods”. Other effects like ACL’s giant mirror balls and haze / smoke were also used. 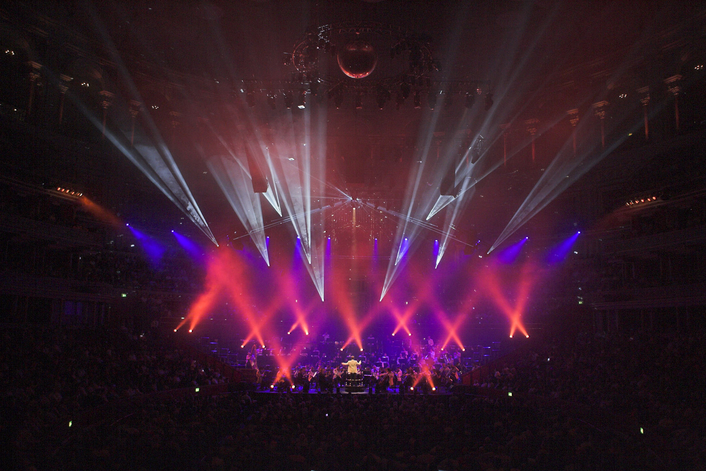 Time was tight – with a different show in either side of Space Spectacular. The main rig was supplemented and utilised such that it looked totally different to the other shows staged there, and thanks to some carefully planned pre-rigging by a great lighting team they were ready in good time before the rehearsals started, and all enjoyed an excellent opening night.

Pyro was designed and supplied by Just FX with a crew led by Lincoln Parkhouse. Lasers were delivered by Definitive Lasers, co-ordinated by Will Hitchins. 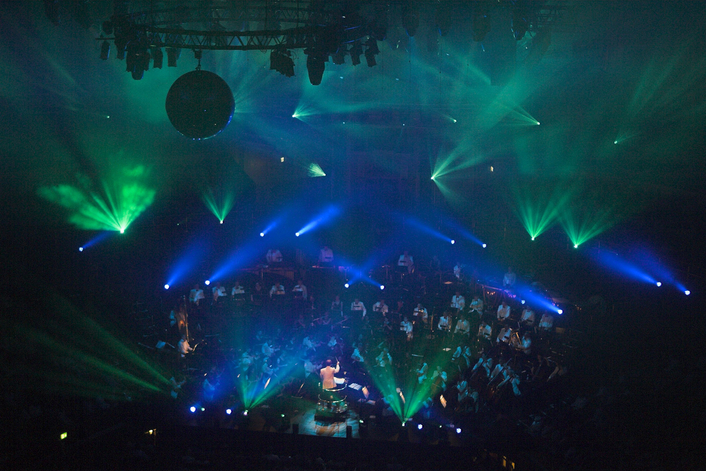 The RAH BMFL Spots are in use almost daily as a core part of the RAH house rig since they were installed in February including by many visiting LDs. “We’ve received numerous positive comments, in particular relating to their brightness compared to other units,” elucidates Richard, adding, “Robe seems to be going from strength to strength right now with solid, reliable products … and I can see why”.