MLA’s unique ability to control noise escape beyond the site perimeter while maintaining pristine fidelity and high sound pressure levels for the audience meant that FOH engineers could simply focus and enjoy mixing their artists to entertain crowds of up to 120,000 people.

System tech, Andy Davies, explains, “We drove each acoustic cell in each MLA to direct sound at the audience, and then cut it off sharply just beyond the perimeter of the field to dramatically reduce noise pollution. As a result, acts including The Who, Florence and the Machine, Kanye West, Paul Weller and Motorhead could comfortably play at 104-105dBA. When a FOH engineer doesn’t have to constantly worry about sound levels they focus on what they do best — mixing — and so they enjoy the experience more and that translates to the audience experience too.”

FOH engineers completing their set left the control position with a smile on their faces and many reported being delighted with the quality and power of the sound. One of the many artists that packed the Pyramid field from front to back was James Bay. His FOH engineer Rob Sadler commented, “I used the system during Rock in Rio and it was great then and it was fantastic today. I barely had to touch anything on the EQ and in very little time I got my show up and running – fantastic. Vocal clarity is so important with James Bay, I can’t really hide the vocals in the mix and with the MLA today it was clarity all the way. I can’t fault the system, no sound check and yet everything I needed on that gig was pretty much there from the off … brilliant.”

FOH engineer for Motorhead Arnie Annables was pleasantly surprised, “I wasn’t looking forward to Glastonbury because of the noise restrictions; as you can imagine we like to play loud! However from the off things went surprisingly well and I was very happy with the outcome. The system sounded good, not what I am used to, but my ears were pleased. The RG Jones guys did a fantastic job looking after me, as did everyone on stage; it’s been a real pleasure.” 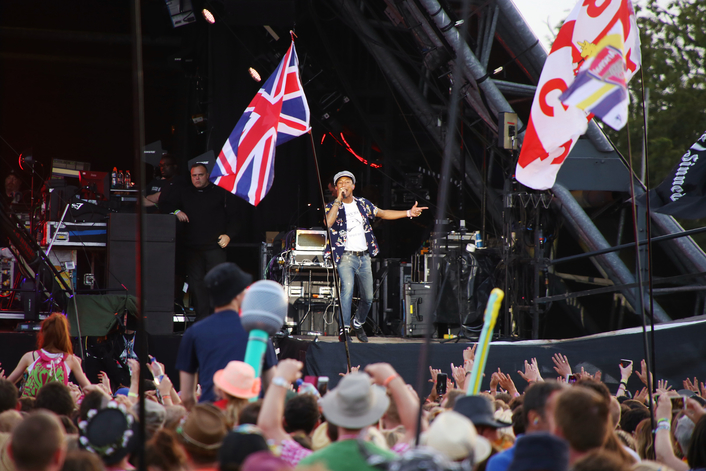 Christopher Lee, FOH engineer for Pharrell Williams, had to be his usual meticulous self at Glastonbury and was pleased that the accompaniment of MLX subs was up to the challenge. Mixing on the DiGiCo SD7 he said, “Pharrell likes the bass and mix to be identical to the record so the subs were a real surprise to me — right up there where I needed them every time. I was really impressed, not just with the configuration but also with the excellent tuning of the system.”

System design was similar to last year, comprising 72 MLA for the main hangs, eight MLA Compact for stereo infill at the pit barrier and a total of six delay positions of both MLA and MLA Compact as required. One key change this year was the addition of two extra delay systems. RG Jones’ Project Manager, Simon Honywill, explains, “This was primarily because Glastonbury production decided to split the FOH control platform from one to two platforms located left and right in front of the stage. They also moved the platforms closer to the stage and along with them the first set of delay towers.” With the centre of the field opened up visually the aim of the festival site was to increase the experience for the audience right at the back of the field close to the camping area, a space previously regarded as out of coverage for the Pyramid stage, These changes necessitated the extra MLA Compact delays.

There was also a massive broadside array of 38 MLX stretched across the entire width of the stage to provide sub-bass support to the entire system. “The system has knitted together really well,” continues Davies. “It has allowed us to put more energy through the middle two delays and push a big thrust of power up the centre of the site. We then use the outer delays to fill in and keep coverage going out to the edge, which has worked really well.” 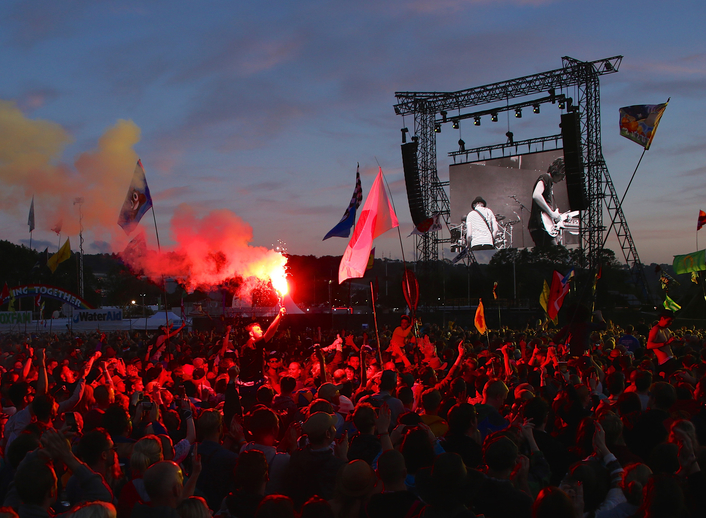 Toby Francis, FOH engineer for Kanye West certainly enjoyed his moment: “I thought it went really well but I also listened to all the other bands during the day and they sounded great. Kanye was on a crane right in front of the PA for a number of songs and it still sounded tight and controlled. What I really liked about the PA is that even at the volume limit for the festival it sounded big and full. The Glastonbury limits are considerably lower than Kanye would prefer it, so yes I was really impressed.”Huw Richards, FOH engineer for Paloma Faith, was delighted: “I’ve used the MLA system many times and I love it. There are some lovely PAs out there but I honestly can’t fault this one. Paloma is a complex sound and it’s hard to thin it out and get some space in the mix but the MLA enabled me to do this. From the get go I didn’t feel in the least bit uncomfortable, I had a great day. So often with festivals you’re transposing a mix from a completely different venue so it can feel a bit shaky at first but not with the MLA, I love it, it’s a great PA and the coverage up the field is excellent.”

Iain Slater, working with surprise act The Libertines, warmed quickly to the system, “This is the first time I’ve used MLA and it sounded impressive, I didn’t have to do any tuning at all everything I needed was there.”

During sub heavy Kanye West, Honywill reported that at 250 meters distance from the stage his clothing was physically moving, achieved by the tried and tested broadside sub cardioid array. “We have 22 MLX cabs facing forward and another 11 facing backwards to give us cancellation and to make sure we’re not disturbing the other stages on site,” explains Davies. “We’ve also electronically arc’d the array so there is delay time incrementally added from the middle box out giving coverage to the sub array that matches up with the site really nicely.”

Toby Francis, FOH engineer for Kanye West certainly enjoyed his moment: “I thought it went really well but I also listened to all the other bands during the day and they sounded great. Kanye was on a crane right in front of the PA for a number of songs and it still sounded tight and controlled. What I really liked about the PA is that even at the volume limit for the festival it sounded big and full. The Glastonbury limits are considerably lower than Kanye would prefer it, so yes I was really impressed.” 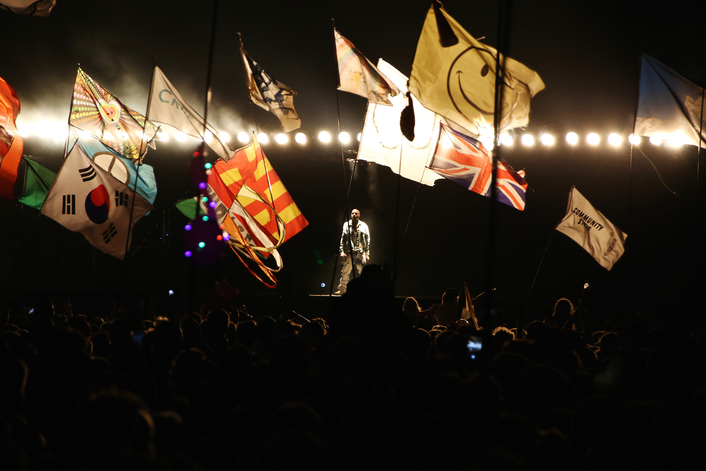 For John Carroll, Managing Director of RG Jones Sound Engineering, Glastonbury has been the affirmation of what he’s known for some time: “There really isn’t anything out there to match the clarity and warmth of the MLA system. Again the continued support from Martin Audio has been second to none which makes it a robust investment from all perspectives.”

Summing up, Honywill said, “We have had a remarkable festival with praise not just from the engineers but from the audience too. It once again made me very proud of MLA and what it can achieve for festivals worldwide, but also illustrated to FOH engineers what a superb sounding box it can be for their touring needs too.” 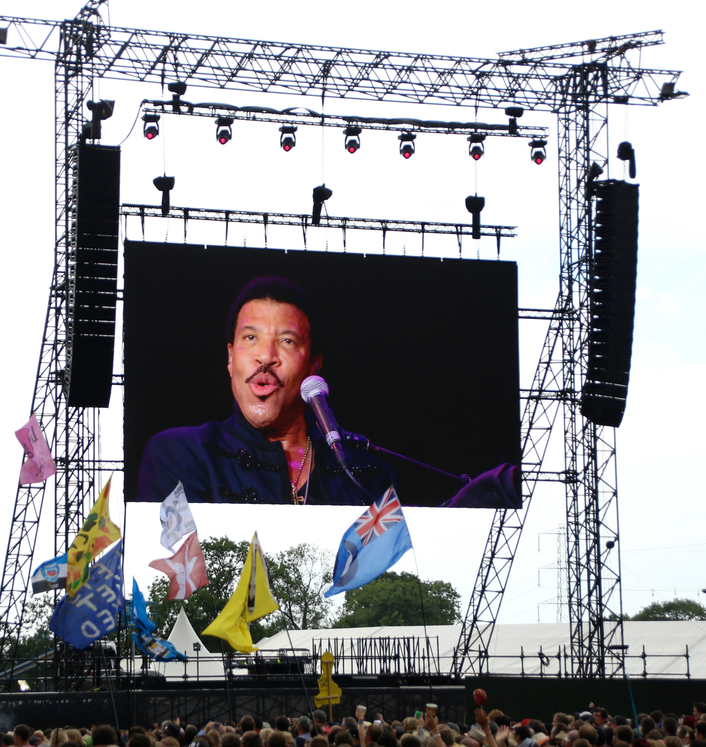