Fine Time for Fineline at Glastonbury 2015 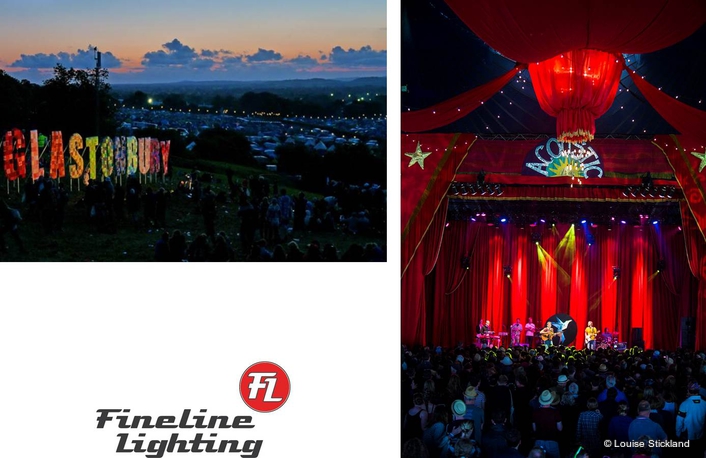 Stornoway at the Acoustic Stage
Glastonbury Festival of Contemporary Performing Arts (Glasto to regulars), arguably the world’s best known and highest profile festival presented another fantastically diverse melting pot of music, performance, entertainment, culture and fun from around the globe descending on the massive Worthy Farm site at Pilton in Somerset.

Bristol based lighting and visuals specialist Fineline Lighting renewed their excellent and fertile long term working relationship with the event – at least  24 years to date – and supplied lighting for the Acoustic Stage, Astrolabe Theatre, Cabaret and Circus venues and also the WOW stage in the Silver Hays dance area featuring some of the best underground DJs.

Says MD Rob Sangwell, “We all love working on Glastonbury and imbibing the spirit of the festival, and are very proud of our history with the event. I have seen many changes over the years, all for the better. The excellent line-ups plus the clamour to perform and be part of the community makes it even more special”

The Acoustic Stage also yielded one of the most civilised and chilled backstage areas in a very convenient location right at the heart of the action!

Acoustic
Fineline has built up the décor element of this stage over the years and especially more recently to include lush red drapes, and masking around the stage and in the ceiling, which  really enhances the theatricality of the space. This year, the Fineline team designed and custom fabricated a special chandelier with 40 spiral filament lamps to complete these deco elements, which looked very cool

With an impressive line-up of both established and breaking artists keen to show their talent in an acoustic environment, stage lighting was designed by Rob and Fineline site crew chief Stu England based on three trusses spanning the 40 x 22 ft. ground support system also installed, trimmed at a decent 9.5 meters.

This was rigged with 10 bars of PAR 64s and some ACLs, together with Martin MAC Quantum Spots on drop bars on the back and mid trusses. Quantum Wash moving lights on the mid truss were used to create the general stage washes, while MAC 101s on the back truss served as effective tab ‘warmers’, highlighting the sumptuous red drapage. 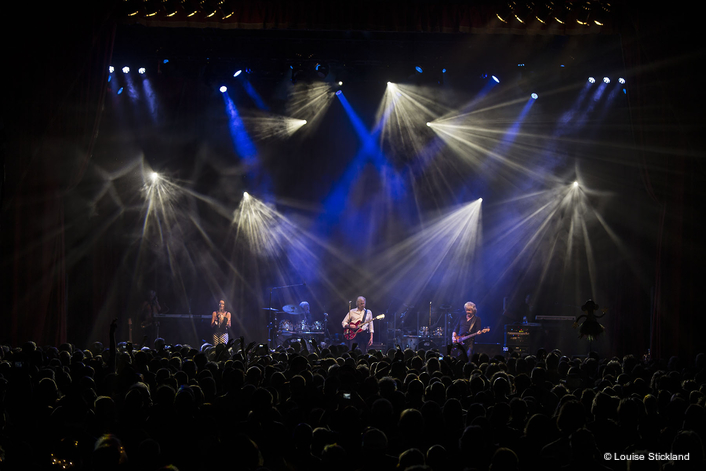 Moody Blues at the Acoustic Stage

The overall lighting reinforced the desired theatrical style ambience, although all genres of music were embraced over the weekend, from rock to blues, jazz to soul, folk to funk!

Avolites dimming and a Sapphire Touch control completed the lighting package, and joining Stu and Rob on the crew were Callum Ostell and Sam Kenyon. They also accommodated guest LDs and caught up with a lot of industry friends who passed through this popular venue.

Astrolabe
Lighting in the Astrolabe theatre tent was co-ordinated by Hal Himsworth, resident LD for several years, with a great line-up of eclectic artists – from dance to physical theatre. With numerous specific requirements for various acts, the pace was relentless and virtually non-stop for 12 hours between performances and rehearsals. 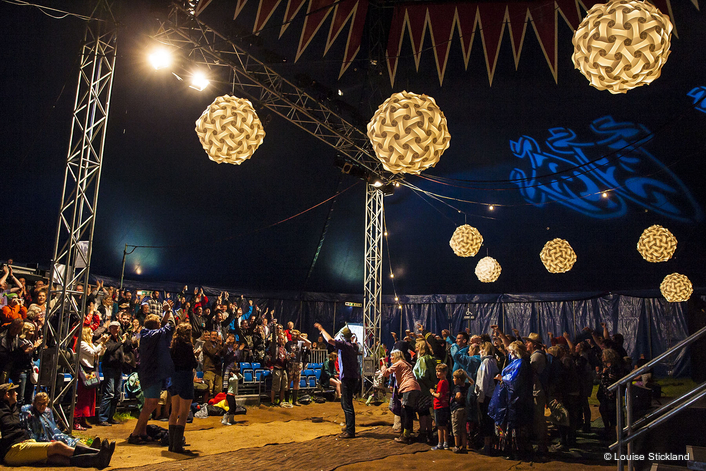 A substantial amount of trussing was rigged in the roof to create a usable theatre grid and most of the base washes were created by static LED wash lights.

The rig incorporated all the performer specs, together with specials and extras as needed and featured about 80 fresnels, profiles, floods and PARs which were re-worked and often refocussed and re-gelled between acts – true theatrical style.

An Avo Pearl Expert with a Wing ran the lights, with Avolites dimming throughout.

Circus
Lighting designer James Loudon (Judge) is another Glasto regular who has weaved his magic in this space for close to 20 years. Another vibrant line up saw a host of aerial artists, pole, trapeze, hoop and silk acrobatics, balancing acts etc. 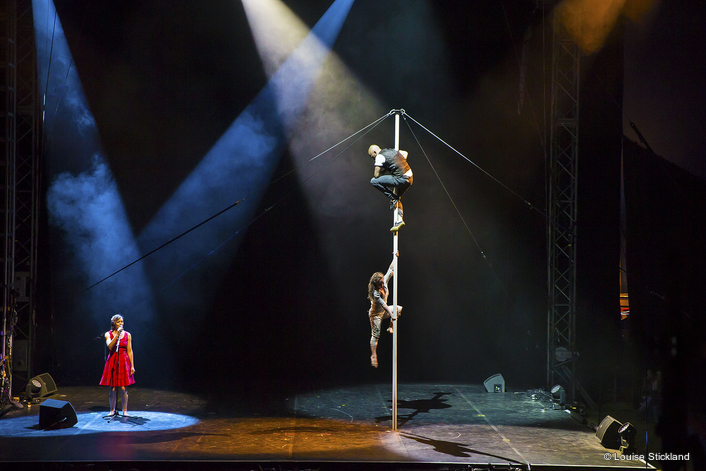 The idea was to make the venue almost in the round, so lighting had to fill 12 metres of headroom and a 3D space about 8 metres square.

The upstage truss was horizontally hinged at approx. 45 degrees along the sides to form an arc around the stage, supported from this truss, at the mid stage ends, and were vertical trusses for side lighting positions.

Additional lights were on the floor and rigged to the tent king poles and flown trusses suspended from the king poles and cupola. A mix of Robe 600E Spots and Chauvet Rogue R2 wash lights on the deck were combined with LED battens serving as knee kickers. These were joined by a good selection of generics – PARs, profiles and fresnels.

All the shows ware rehearsed, pre-programmed and cue-stacked on the console – in another gruelling schedule - so everything triggered at the right times, with an Avo Sapphire Touch console and Avolites dimming.James was joined by techs Charlie Denny and Johnny Westall.

Fixtures were rigged on a 4 x 2 mere box truss built around the king pole to give FOH and audience positions, and on two trusses over the stage, with two vertical trusses on the downstage edge for booms. 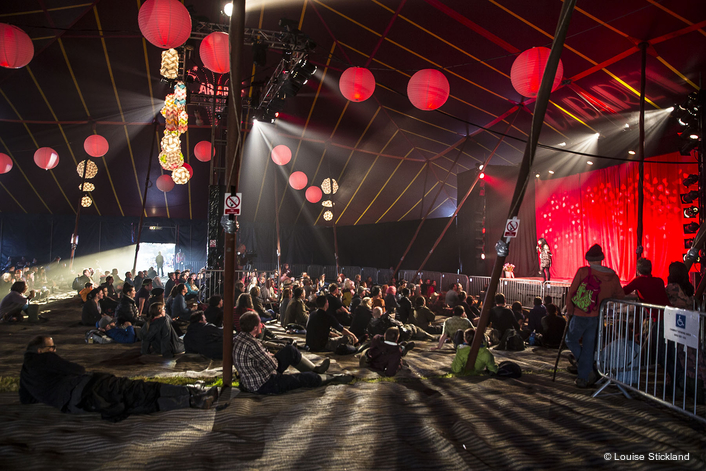 Wingnut also created some really cool custom paper globe lanterns internally lit with special LED rods which were strung up throughout the space adding depth and a bit of visual scenery to the otherwise black void above the audience. These look set to become a regular Glasto feature! He also produced a bespoke mirror ball installation at the rear of the stage.

The Wow Stage lighting was designed by James “Chimpy” Harrington one of the creative mainstays of Motion, Bristol’s most cutting-edge clubbing experience.

He used a variety of kit including 10 x Chauvet R2 beams, six Robe LEDBeam 100s, eight 2-lites, Atomic strobes and Chauvet Nexus 7x7 panels, PARs and ACLs and also lit the exterior of HMS Wow with PARs and MBIs and ensured the funnel billowed with smoke  curtesy of Gem Roadie smoker below!