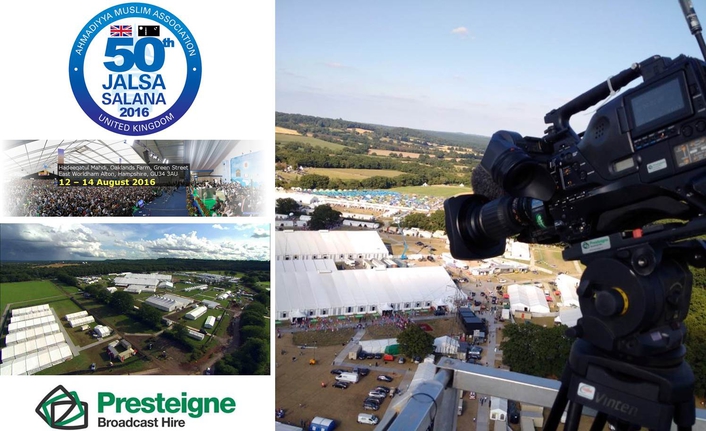 The 50th anniversary of Jalsa Salana UK, the three-day international convention of the Ahmadiyya Muslim Community, took place at Hadiqat-ul-Mahdi (Oaklands Farm, near Alton, Hampshire) from 12-14 August, attracting upwards of 40,000 Ahmadi Muslims plus other interested dignitaries and participants from around the world.

The convention is Britain's largest annual Islamic gathering, designed to broaden religious knowledge and promote peace and harmony while rejecting violence and extremism. The entire event is televised live by Muslim Television Ahmadiyya International (MTA) the global satellite and streaming TV network consisting of four international channels - one of which was, for the first time, on-line only - that together reach an estimated 200 million viewers in more than 70 countries around the world.

Presteigne Broadcast Hire, a partner of MTA and the Jalsa UK broadcast for several years, was again called upon to supply a comprehensive range of RF camcorders with Presteigne telemetry systems, fibre extensions, wide angle lenses, wireless headband mics, radio handsets, and HD-SDI monitors to enable MTA to provide comprehensive coverage of proceedings, including the opening address from His Holiness Hazrat Mirza Masroor Ahmad, the world leader of the Ahmadiyya Muslim community.

Salman Patel, production manager and technical director for MTA’s coverage of Jalsa each year, said, “Our aim is to produce television of the highest quality that conveys the exact same emotion, solidarity, and brotherhood to those watching on TV or personal devices worldwide as that experienced by those physically present at what essentially becomes a town nearly double the population of neighbouring Alton.

“The Jalsa broadcast is extensive, complex, and often hectic, but we’re fortunate to work with partners such as Presteigne whom we have come to rely on for broadcast technology that not only arrives whenever, and wherever, we need it, but has been extensively tested to ensure that it works straight out of the case. That peace of mind is huge for an operation like this.”

The broadcast was not restricted to the main, enclosed mosque, but included special features and presentations from roving reporters throughout the vast grounds of the farm-turned-mosque and convention site over the three days.

The complexity of the broadcast is not limited to audio, video and studio functions.

Patel added, “Although there are elements of our broadcast that are similar to more conventional OB projects, one aspect that differentiates our broadcast from more traditional OBs is that we have 16 simultaneous language translations going on, live, to further enhance engagement for viewers in syndicated regions worldwide. It’s no simple task. It requires, of course, good translators, but equally important, reliable technology to ensure that the skill of the translators isn’t undermined.”

OB trucks sat at the heart of the broadcast with multiple MTA OB vans and satellite uplinks strategically positioned within the core broadcast compound. As well as roaming reporters and fixed camera positions in the central presentation hall, a fully equipped studio provided MTA anchors with the backdrop and facilities for non-stop coverage from a centralised hub.

Presteigne CEO Mike Ransome, “The Ahmadiyya organisation is given 28 days from set-up to clean-up for Jalsa Salana, but planning for the event, and the broadcast, takes place pretty much year ‘round. It is a truly remarkable occasion and we are delighted to continue to serve as a key supplier of not only technology, but support and service to their community.”

Patel said, “As Ahmadiyya expands, participation in Jalsa UK both domestically and internationally is expanding right along with it, not only in terms of attendees but in terms of our requirements to further improve the quality and reach of our global broadcast. Presteigne continues to be a key partner in our ability to achieve our aim to communicate our message of peace to millions of people worldwide.”