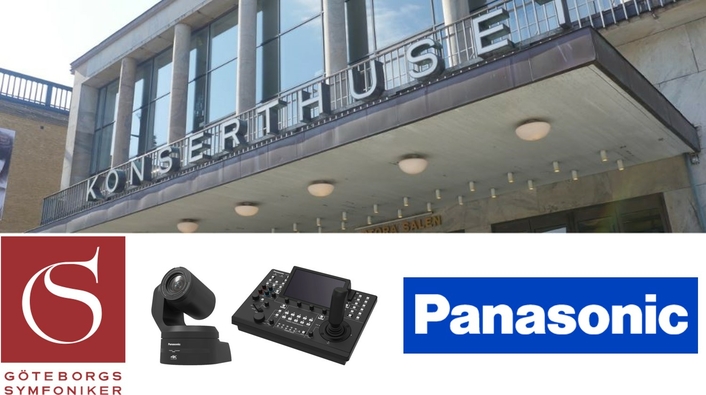 The Gothenburg Symphony Orchestra has implemented a Panasonic remote camera infrastructure to help live stream its concerts to 150,000 people a month in the highest possible quality

The Gothenburg Symphony Orchestra is the National Orchestra of Sweden. Each year, about 100 concerts are held in the Gothenburg Concert Hall at Götaplatsen. The Orchestra has the goal of becoming one of the foremost orchestras in the world by 2020.The Orchestra’s television channel GSOplay broadcasts concerts live and on demand in Full HD. The channel’s goal is to offer classical music enthusiasts around the world the opportunity to experience the world of the Gothenburg Symphony Orchestra. Through an extensive series of interviews and behind the scenes material, GSOplay’s audience has the opportunity to get to know conductors, soloists, and the orchestra in a unique and intimate way.

The aim is to reach a broader and more diverse audience throughout the world, by making classical music more accessible, emotional, and enjoyable.

Eva Essvik, Audience & Business Developer for Gothenburg Symphony Orchestra, said, “We have up to 150,000 people watching every month from across the world, we have everybody from hardcore classical music fans to curious beginners who may be listening to classical music for the first time.

“To sit in the hall is something very special. But GSOplay is a different experience. You get very close. It allows you to sit in the orchestra and see the cooperation between musicians and between the musicians and the conductor.”

The Symphony live streams between 20 and 25 concerts a year. These are then edited and the concert is published as video on demand.

It’s a complicated space to cover. As part of the production, GSOplay likes to have as wide a variety of shots as it can. To achieve this, it combines ten Panasonic AW-UE150 4K PTZ cameras, a further AK-UB300 4K box camera, two sliders and two Polecam Autopods which give vertical and lateral movements within shots.

The sound recording is made with the classic Decca tree with three microphones in a T-shape above the conductor, with extra microphones on certain instruments or soloists.

"On a typical concert, we’ll have two camera operators each running five cameras each on two remote controllers"

Each Autopod elevation unit is supplied with a universal camera mounting plate and elevation ranges from 55cm to 125cm and is remotely controlled by a foot pedal or hand controller.

Måns Pär Fogelberg, Producer for GSOplay, said, “We started GSOplay in 2012, with Panasonic’s last generation of Full HD PTZ (AW-HE120) cameras. Over the last seven years, we have certainly learned a great deal about how to produce this kind of concert and how to use the cameras. The UE150 allows us greater dynamics, better lenses and the ability to switch quickly and easily from wide to tele shots.

“There is no option to produce these kinds of recordings with manned cameras. The audience wouldn’t like it, the orchestra wouldn’t like it, so we need PTZ systems to do it at all. I first fell in love with the old Panasonic RP-655 controllers, because you could really work the cameras as if they were manned. We’re always learning how to get the best out of the system.”

A studio tucked in the bowels of the concert hall acts as the control centre for GSOplay. Here, Panasonic has supplied two of its latest remote controllers; the AW-RP150 has a new one-hand operation joystick (controlling PTZ or Focus) and a large touch-panel LCD screen for monitoring and menu setting.

“On a typical concert, we’ll have two camera operators each running five cameras each on two remote controllers, a score reader who reads the music and lets us know what is coming next, and a vision mixer to switch between the shots,” adds Måns Pär Fogelberg.

“The way we work with these cameras is kind of new and certainly to television recording standards. We work with a lot of pre-sets, so we’ll have between 40 and 50 pre-sets per camera on any concert. We like to imitate typical manned camera productions, so we do live movements in picture, the music is live, so we need to react to the music in real time.”

Gothenburg Symphony Orchestra aims to start the 2019 autumn season in 4K. They plan to re-cable the concert hall over the summer, rewiring for 4K and implementing more connection points, as it’s now running more cameras than ever before.

“When we saw the UE150 cameras last summer, we saw that it was the same technology as we were used to with the HE120, but with a 4K layer, greater dynamics, better lenses and, very importantly, 12G SDI. This meant instead of using a fibre only solution or a quad 3G SDI we were able to have much greater flexibility from the camera,” adds Måns Pär Fogelberg.

The concerts produced by GSOplay are hosted on the Symphony website, but also on an app, which is proving popular with a new audience.

“When we look at the statistics, we can see that the app is being used by people we’ve not reached before,” adds Eva Essvik. “This new way of consuming classical music, where people have a wide choice and the ability to watch when and where they like, is attracting a new, younger audience.”