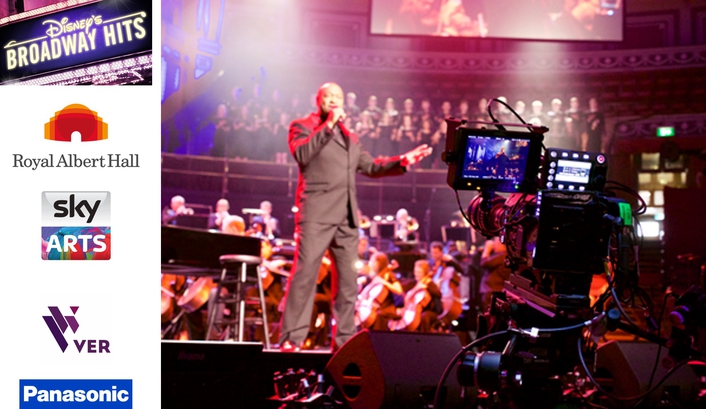 The new Disney concert celebrating over two decades of stunning Broadway shows received its European premiere at the Royal Albert Hall in London in October. This one-night-only Disney’s Broadway Hits event, featuring music from such award-winning scores as Aida, Beauty and the Beast, Mary Poppins, Tarzan, The Lion King, The Hunchback of Notre Dame and the rest of the Disney Theatrical catalog, marked the first time this show was seen in Europe.

This broadcast version of the live European premiere on the world-famous Royal Albert Hall stage was hosted by West End star John Barrowman. The show featured the 75-piece BBC Concert Orchestra alongside a bevy of stars – including eight-time Academy Award-winning composer Alan Menken and members of Aladdin’s West End cast – performing scores from an astonishing number of Disney successes.
The Panasonic 4K camera systems, delivered and configured by rental company VER London, were the centerpiece of an extensive equipment package, controlled via a fly-pack built around Evertz routers, Kayenne switching and Riedel communications.

“As the TV production designer and director, my objective was a cinematic look, a visually stunning product to match the magic of the music: I don’t think we could have accomplished such spectacular results had Panasonic not jumped on board as our camera partner,” he added. “I was extremely pleased with the quality of the 4K cameras and how they performed, especially in view of the amount of product involved, and the variety of shots and points-of-view that was required.

“I venture to say that this camera arsenal made my vision of the concert come true. For every shot that I designed Panasonic and VER were able to deliver a solution for us.”

During the week leading up to the concert, Hatcher’s team was also shooting a behind-the-scenes documentary featuring the performers preparing for the live show. Panasonic and VER worked together to configure four of the VariCam LT packages for single camera ENG field shooting.

With the objective of recording multiple viewing angles of the concert as well as capturing shots of the venue’s historic Italianate architecture, one LT was placed on a 30’ jib in the upper gallery, another on a second 30' jib in front of stage left. Two LTs were placed on risers on both sides of the floor, right and left. There was an LT on a Fisher dolly on the arena floor, looking across the audience onto the performance space. Another LT was placed in the second level Loggia Box on stage right. During the dress rehearsal, there was an LT on a dolly directly in front of the stage, and another on a Steadicam on stage to capture wraps.

John DeMaio, the concert’s Director of Photography, explained that because the VariCam LT is so agile, the 4K camcorder was able to be utilised throughout the massive Royal Albert Hall. The lightweight Super 35 sensor camera is ideal for handheld, Steadicam, jib, crane, drone, gimbal and overall cinema verité work.
The two UC3000 studio cameras were placed at front of house shooting toward the stage. One was on a riser on the floor level. The other was placed in the second level Loggia Box. Of the UE70 integrated PTZs, one was hung on the stage facing back toward the audience for the “Alan Menken (at the piano) moment,” another in the lighting grid pointing down, another stage left, one trained on the conductor, and the last on a back rail pointing out to capture a reverse shot of the orchestra or wide shot of the audience in front of house. 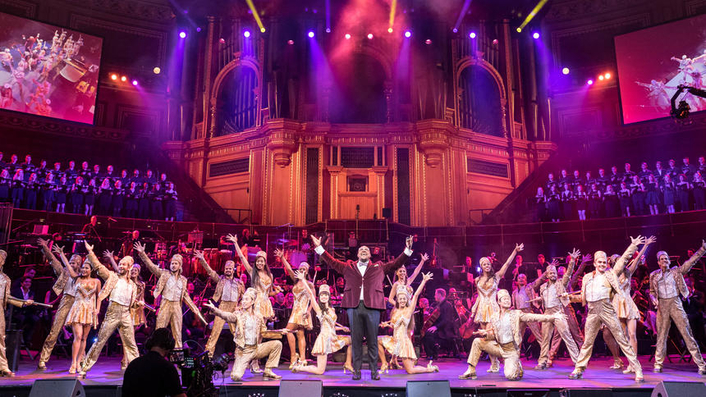 DeMaio said he made extensive use of the VariCam LT’s signature innovation, dual native ISOs of 800/5000, with ISO5000 perfect for extreme low-lighting situations. ”The concert was gorgeously lit with a rich colour palette a la Disney, but lights were kept down on the audience, which numbered close to 5,300, so as not to undercut the viewing experience,” he said. “I don’t know of many cameras that could have pulled it off with such great success, capturing the effects of sumptuous lighting that changed from song to song, while at the same time not disturbing the audience.” At ISO5000, the VariCam LT can capture stunning images from dark scenes that are unobtainable with other cameras.

The DP said the concert was shot in 4K V-Log to create the broadcast version. “Panasonic’s team worked in advance to provide a LUT for the live switched show displayed on the large in-house IMAG screens, and we utilised that LUT in the early stages of post,” he noted. “In terms of colour matching, we worked only slightly back from the LTs to the UC3000s and UE70s--overall colour rendition was excellent.”
Outboard recording from the UC3000s and UE70s was done in ProRes 4444 to AJA Ki Pro recorders. In addition to his DP responsibilities, DeMaio supervised post. Editing for the Sky Arts broadcast was done in Adobe Premiere Pro, and colour correction in DaVinci Resolve. “We’d shot an ungraded 4K master in V-Log, so we didn’t realise the full effects until after the colour correct,” he said. “Details jumped off the screen and brought the show to a whole different level--basically, our jaws dropped.” 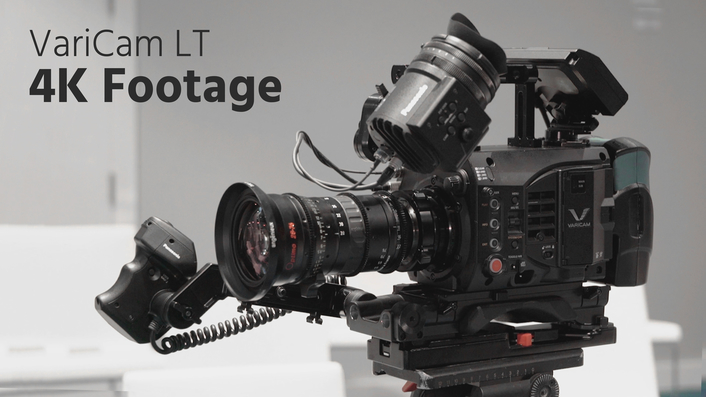