Northern Lights Shine at the Minster 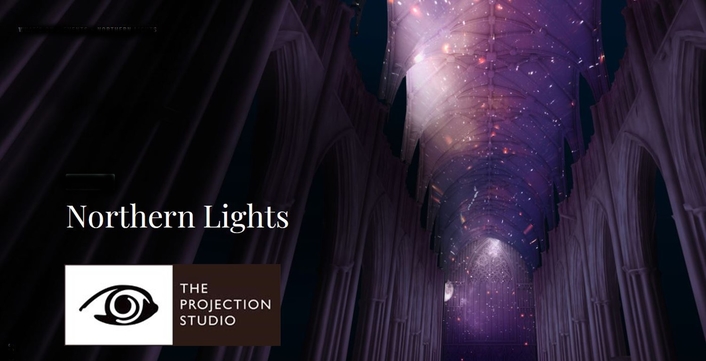 The video projection and sound installation was commissioned by the York Minster Fund as the culmination of ‘The Northern Lights Dinner’ fundraiser. This was held as part of a four- year campaign to build an ongoing endowment for the protection and restoration of the Minster’s priceless historic glass. This involved illuminating the vault of the nave and famous Great West Window, known as ‘The Heart of Yorkshire’.

Ross & Karen are famous for their projection and audio artworks. Their style of mixed-media ‘installation performance’ has developed over a series of innovative projects at many different locations. They worked at the Minster in 2010 when they produced ‘Rose’, another spectacular artwork which focussed on the celebrated Rose Window. They have also created other artworks for the ‘Illuminating York’ festival in 2008 & 2013.

“York has been very good to us, giving us the freedom to create several major works here. We were delighted to be back, and this time working inside the Minster,” said Ross. 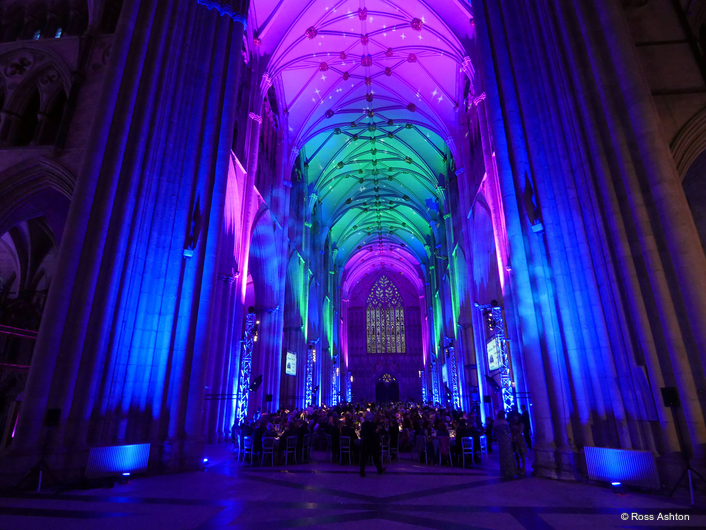 The 10-minute artwork was seen by an audience of 700 at the Northern Lights dinner. This was followed by two days of performances with the Minster being opened to the public at dusk each night. This allowed another 3,300 people to see the artwork.

The Minster’s nave seating was removed to allow for the location of the dining tables for the fundraising dinner. Apart from the day of the dinner, the nave remained clear, offering the public a rare glimpse of how it would have been up to 200 years ago before seating became common in churches.

‘Northern Lights’ was an ambitious artwork designed to be an immersive experience. Ross’ visual inspiration came from the medieval stained glass itself. This authenticity of image, was accompanied by a richly textured sound-track by Karen, which featured haunting voices reading in Old English, Old Norse and Latin, as well as modern English. This was intended to give people the unique opportunity to experience the emotion and history associated with this very special environment. 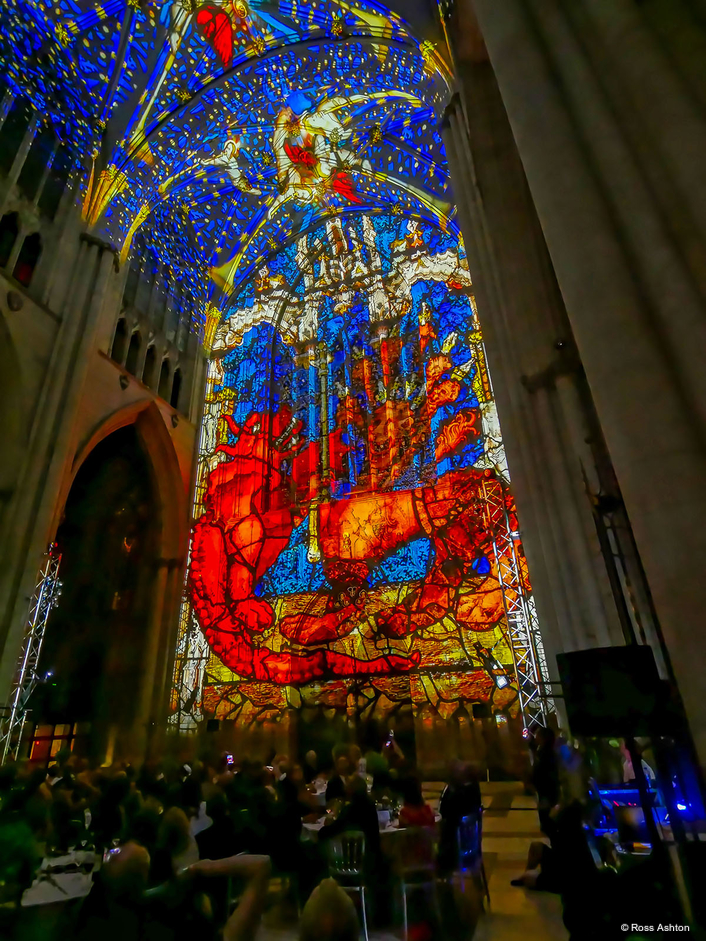 “The aim was to encapsulate the medieval mind and imagination and communicate it in a meaningful, accessible way that people could engage with,” she explained.

Ross and Karen undertook extensive research before compiling all the visual and sonic materials into a storyboard. The York Glaziers Trust provided important stained glass image sources. Karen worked with Dr. Matt Townend from the University of York and Prof. Giles Gasper of the Durham based ‘Ordered Universe’ project, to source the multi-lingual texts and translations.

Readings of the texts were made by staff and students of the Department of English and Related Literature, and the Centre for Medieval Studies at the University of York.

Karen also selected three pieces of music from the Minster’s recorded repertoire. Two of these were performances of the York Minster Choir, under the directorship of Robert Sharpe, and an organ piece performed on the Minster organ by Ben Morris. 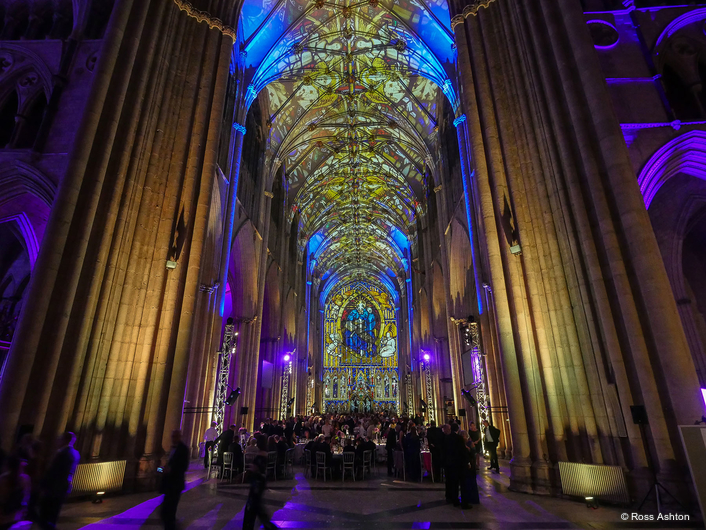 The final realised work was divided into three parts, the first two symbolically encompassing physical creation and the end of the world as imagined in those early times. It concluded with the idea of perfection as reflected in the geometry and design of the Minster.

The projected images covered the entirety of the 65 x 20 metre nave vault and the 20 metres wide by 40 metres high West Wall. Ross used eight blended projectors to achieve the roof images and another three for the end wall, all Panasonic PT-DW 17K machines. Ross also devised a customised cradle for the nave projectors so they would point 15 degrees off the vertical and almost directly up into the roof. The three West Wall projectors were rigged on a structure built beneath the organ on the opposite end of the nave. The fully mapped projection was controlled by Dataton Watchout, programmed by Richard Kenyon. 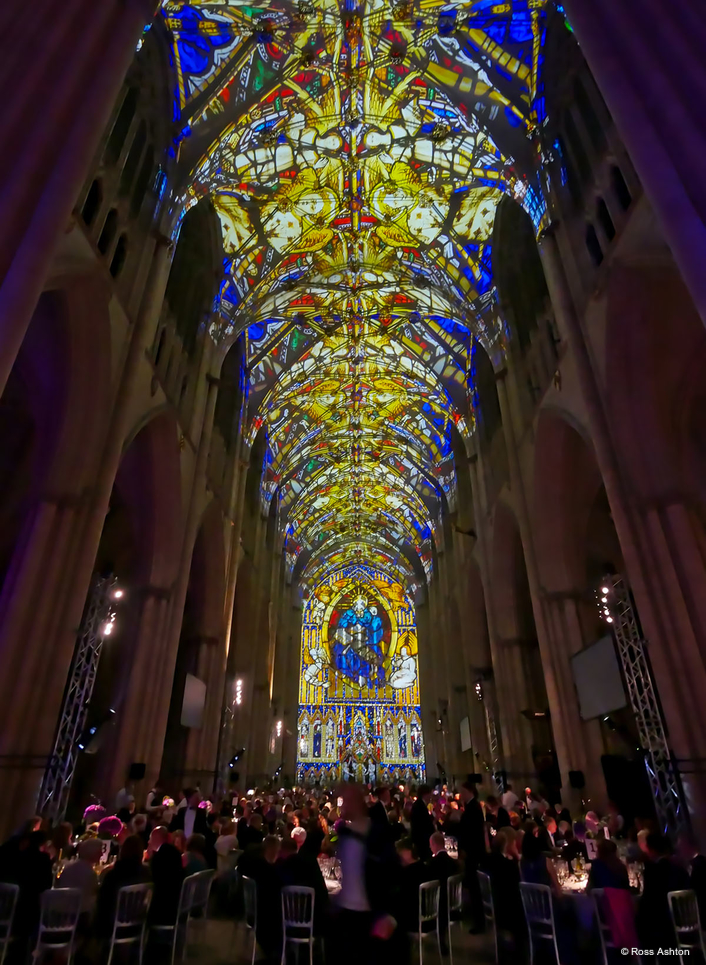 The main challenge for the sound was the acoustics of the space. The Minster is renowned for its long reverberant characteristics. For ‘Northern Lights’, Karen wished to use surround sound derived techniques whilst each word, sound and effect had to be as clear as possible. Rock-Tech’s working knowledge of the venue was invaluable.

A basic framework of Hill Pro Audio speakers in key positions was used for the dinner event and auction. This was augmented with additional speakers, used only for ‘Northern Lights’ to achieve the immersive quality of sound, to aid clarity and provide accommodation for spatial FX related to animated actions within the projection.

The initial basic mix was completed in the studio, but to get a balance and make it work properly in situ, Karen worked on the final mix from the centre of the nave during the nights prior to the event.

It was hoped that the dinner would raise around a million pounds for the York Minster Fund, and after the success of ‘Northern Lights’, the total was £1.4 million. 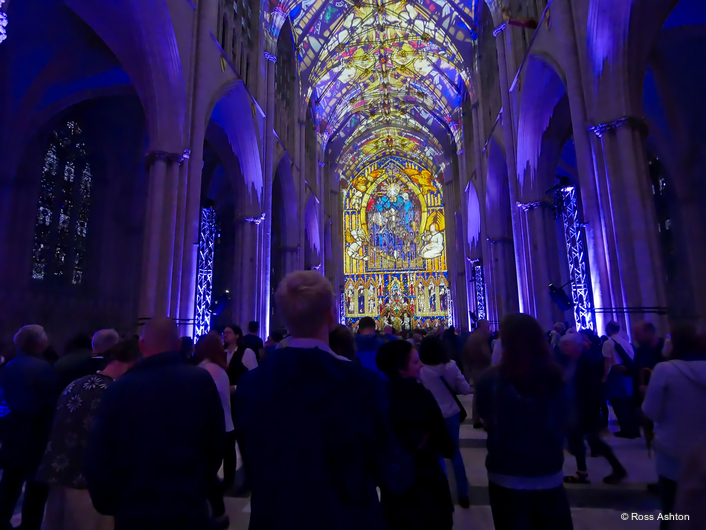 “We were very pleased with the show and were quietly confident that it would be received well by the public” commented Ross, “But we were all completely overwhelmed by the enthusiasm and extent of the response, and with just how much people appreciated seeing such a well-loved landmark in a completely different light through the piece. We are extremely proud to have been able to work inside the Minster and it’s a testament to the great team of people around us that it’s been such a success”.

Neil Sanderson, director of the York Minster Fund, said, “The Northern Lights spectacular exceeded all our expectations. The combination of projected imagery, spoken word, and music perfectly complemented the cavernous space of the Minster and using imagery of the medieval windows, the installation brought a whole new audience to the eternal truths they contain. The reaction of the sell-out crowds was testament to the quality of Ross and Karen’s work”.