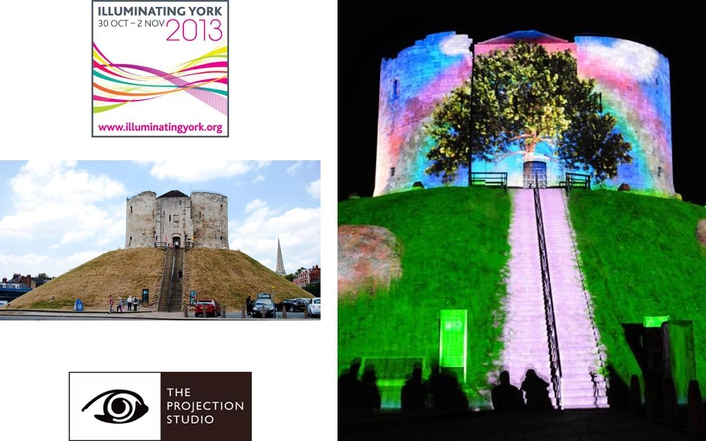 The acclaimed work - which received massive coverage in the local and national press and an incredible public response - was beamed onto Clifford’s Tower. Once the keep at York’s famous Castle, the imposing Clifford’s Tower sits on top of a tall mound and is one of York’s signature pieces of architecture as well as among the most popular attractions in Yorkshire.  English Heritage owns the tower, and Ashton was delighted to have the opportunity to apply his spectacular and unique visual magic. 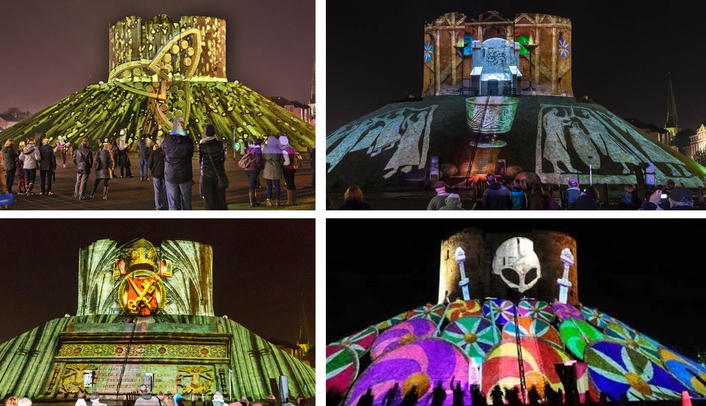 The giant images stretched 75 metres wide across the base of the mound and were 25 metres tall, filling the whole space, lifting the landmark out of its surroundings using 3D modeling to accentuate the shape of the architecture and landscape for the 15 minute looped video show.

Combined with Monid’s vibrant soundtrack, this was a truly groundbreaking work for the city and the festival as well as for Ashton’s extensive portfolio of projecting onto iconic structures, landmarks and spaces worldwide. 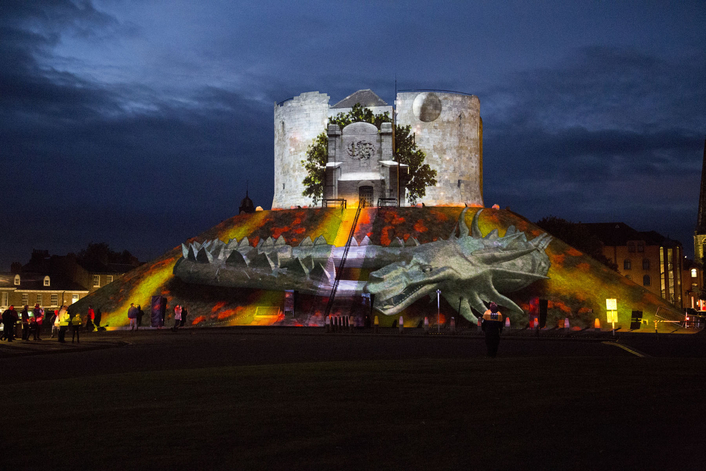 After the first site visit, Ashton and Monid realized the enormous potential of Clifford’s Tower for 3D mapped video and applied the technique on a grand scale. They carried out meticulous research to create the content on which they worked for several months.

The projections were physically realized using eight Christie 18K machines, run as four doubled up pairs to maximize the brightness, with a d3 server control system running all the video content. The equipment was located on specially constructed towers at the base of the mound and supplied by QED with a team led by Richard Porter. 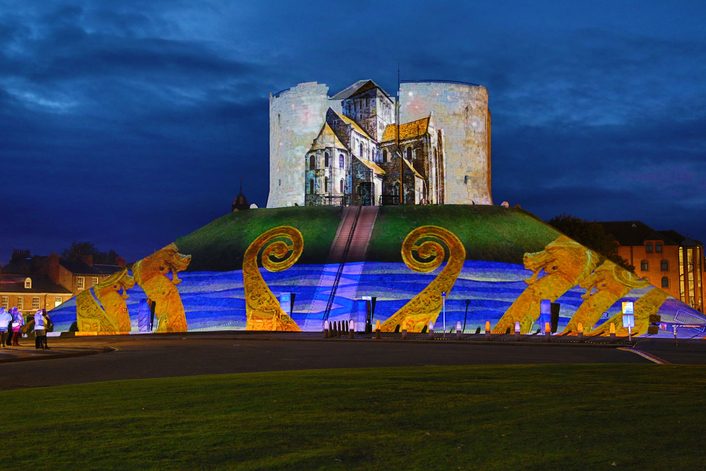 Ashton and Monid unfolded their complex but beautifully engaging narrative about the three Kings of Denmark – Harold Bluetooth, Sweyn Forkbeard, the first Viking King of England and Cnut The Great and followed their dynastic journey from local pagan rulers to Christian empire builders of the North.

The ‘Triquetra’ is a three part ancient symbol that contains three interlocked vesica pieces. Ashton and Monid saw this as the perfect name for the piece as it is a symbol that had significance to the pagan Vikings as a symbol of Odin, and was transformed into a symbol of the Trinity when the Vikings converted to Christianity.  A process that was overseen by the three Viking Kings of the narrative. 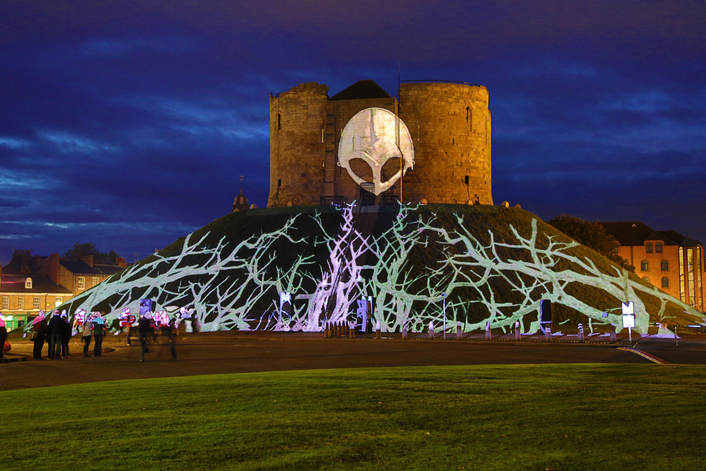 Death of a Warrior

Ashton and his team at The Projection Studio created all the artwork either from scratch, or by using contemporary documents and flat artwork.

The sound setup consisted of D&B C7 system and was supplied by Sheffield based AVLS, led by Tom Vickers. The audio was played out using an ADAT machine and the 5.1 surround mix further drew the amassed crowds into the work and fully immersed them in the action. 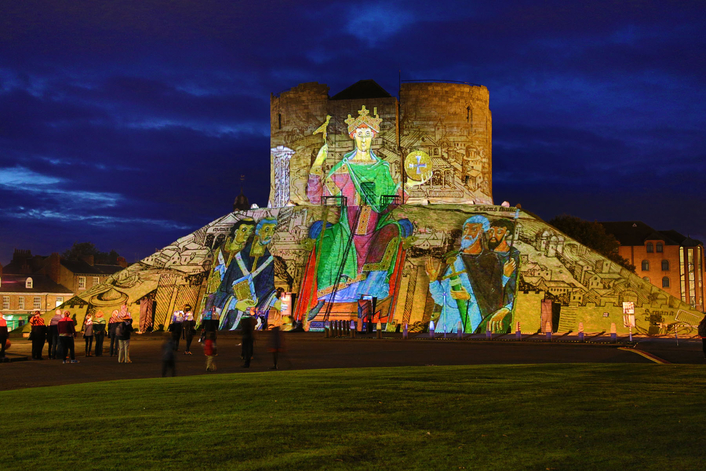 It featured striking voiceovers in Old English, Old Norse and Latin tongues for which Monid had put out a call for speakers, and received an incredible response from the student and academic community from five universities including York and Cambridge – who welcomed the chance to express themselves like this in these languages. Their readings were taken from manuscripts and documents of that early medieval period.

‘Triquetra’ was the largest and most spectacular of the digital artworks that graced York for the four day 2013 Festival. 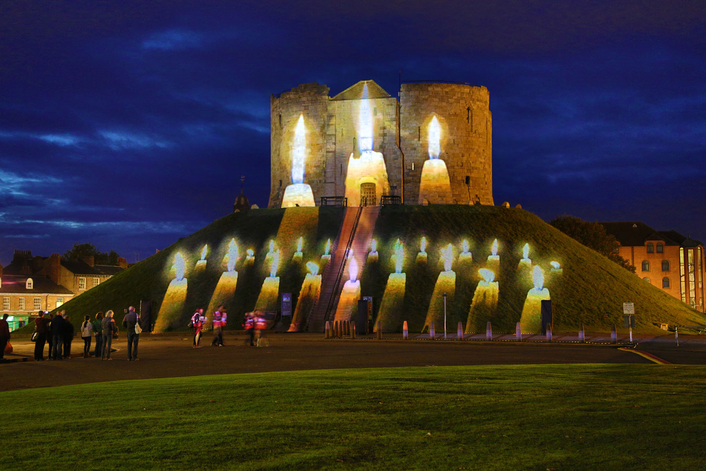 Described as “A stunning centrepiece to Illuminating York that worked beautifully and sensitively to re-imagine Clifford.s Tower” by Gill Cooper, Head of Arts, Heritage & Culture at the City of York Council, it helped pull over 27,000 visitors to the city to see and enjoy the installations. Local production management was provided by Ben Pugh.

Says Ashton, “Naturally it was a great honour to be asked back again for the third time and to be able to work in such an amazing location. Its many challenges were a joy to overcome and it has been one of the most interesting and rewarding projects of the year, even more so after seeing and hearing the public’s reaction”.