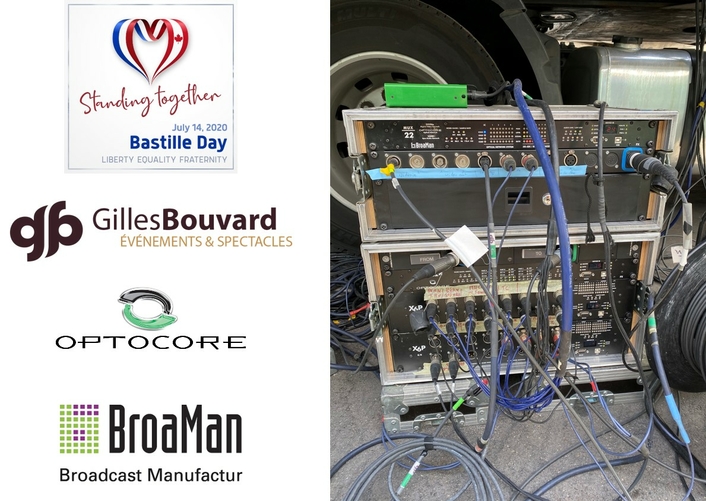 Once again BroaMan and Optocore network devices were deployed to maximum effect at this year’s Grand Concert de Paris spectacular.

The event coincides with France’s National Day (on July 14). And having scaled new heights last year with the unique solutions and I/O capacity provided by the two German partner brands—creating an immersive environment for Radio France, with 152 Optocore preamps and MUX22 IVT / MADI connectivity—this year technology contractors GB4D went even further. Working once again for Radio France, they set up an elaborate optical broadcast network topography on the Champ de Mars in the shadow of the Eiffel Tower, but with the location eerily empty other than for technicians.

“Playing without an audience due to COVID 19 was certainly weird,” stated GB4D owner, Gilles Bouvard. “We felt really alone without the 500,000 spectators!”

Bouvard was clear in what the challenge represented, and it was essentially to produce an advance multi-format broadcast signal flow to the Radio France and France TV OB trucks from the FOH and monitor positions, as well as from the pyrotechnics position. 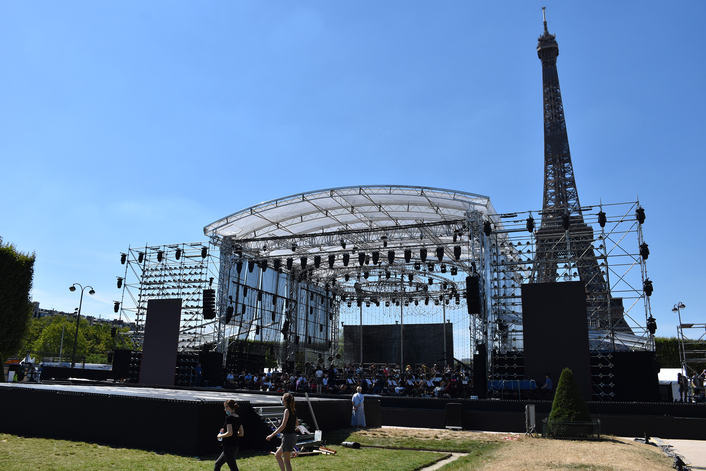 “We had to provide Radio France’s sound engineers with all the necessary tools,” he confirmed. And this year that again included 144 Optocore microphone preamps (both X6RFX and TP) as well as MADI stream connectivity between the LAWO, Yamaha and Studer consoles, via BroaMan MUX22 MADI and Optocore M12 and DD2FR-FX devices. In all, GB4D created a distribution universe of more than 600 audio streams between the FOH and monitor consoles, and broadcast facilities for Radio France and France TV. 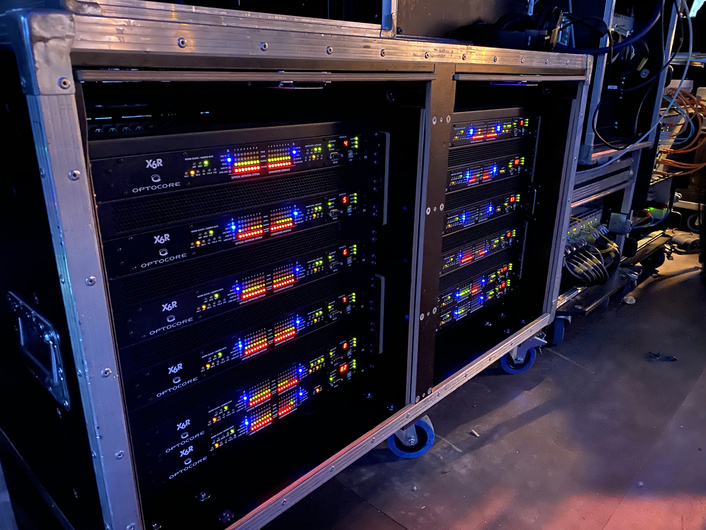 Additionally, GB4D provided MADI audio streams for virtual soundchecks to radio technicians in charge of HF control for the soloists. “This made it possible from the Wavetool software to conduct MADI monitoring of the 155 pickup microphone preamps,” explained Bouvard. Finally GB4D constructed a BroaMan link for the spectacular firework finale which was once again produced by Groupe F.

Explaining this final deployment, Gilles Bouvard said, “The request was to retrieve the audio streams from the firework soundtrack, to give the pyrotechnician a video stream from the France TV finale, and to link everyone together with an intercom network for orders." 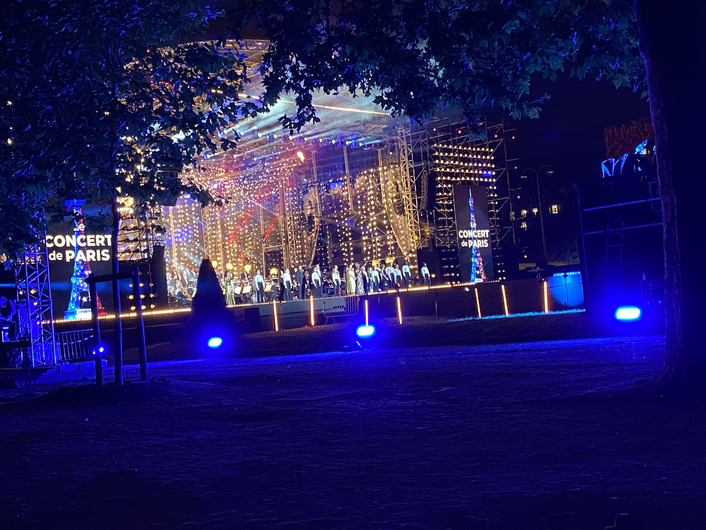 This connection was achieved via a pair of BroaMan MUX22 IVT/IC444, a device that combines different formats of Video, Audio, IP, Intercom and other data on fiber distribution system. The sound of the fireworks was wired to the four line inputs that populate the MUX22, wired with other Optocore audio interfaces in a redundant optical loop. All audio streams were shared throughout the Optocore network.

The cable distance between the two MUX22s—stationed at the Eiffel Tower and the France TV OB van—was approximately 450 metres, with SDI signals passed between the fireworks base and France TV control room for the grand finale, with the four IC444 audio line inputs, and LAN for the IP intercom. 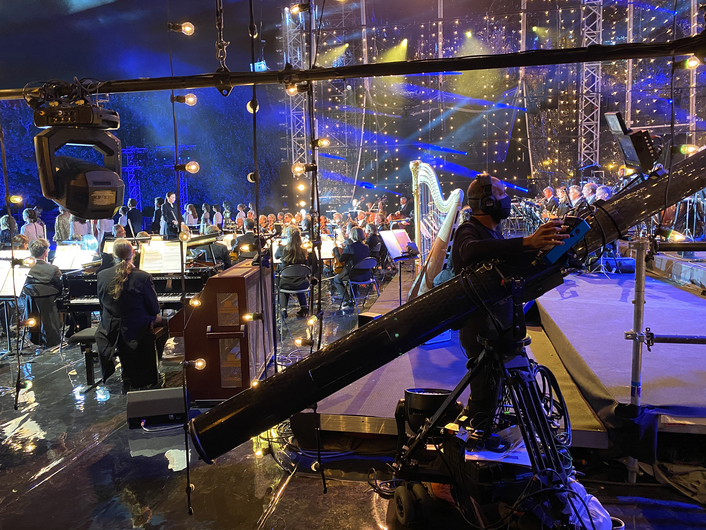 From the fireworks control room under the Eiffel Tower, the audio signals for the soundtrack had to be connected. For this, two Apple computers were equipped with sound cards, which were connected to the four line-level audio ports of the MUX22.

An SDI output, connected to a 32 "screen, broadcast the final image of the France TV production. The pyro technician wanted to have the image direct from the OB van in order to avoid the six-to-eight seconds delay from the satellite.

Thanks to the MUX22 LAN, we were also able to create an order network between the fireworks technician and the France TV script manager,” continued Bouvard. “This GreenGo IP order network consisted of a portable station on the pyro side and a 4-wire box for the interface with the France TV communication grid.” 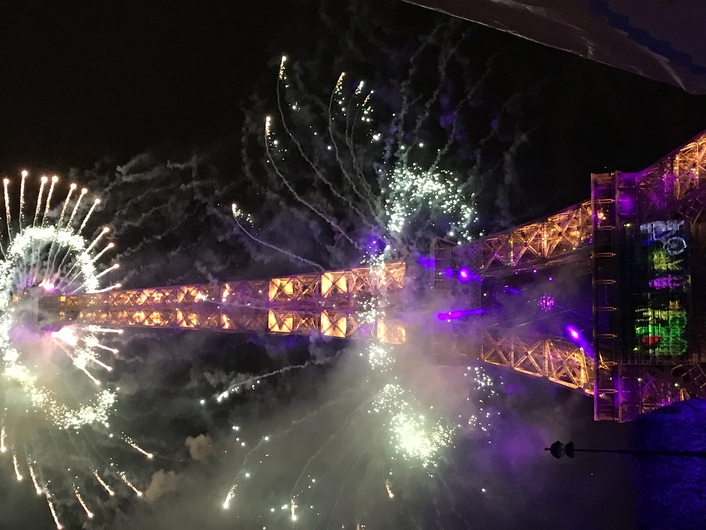 “The choice of MUX22 for this application was simple,” stated Bouvard. “Everything I needed, in terms of format transmission, was contained in one box!”

The Grand Concert de Paris, for which Radio France is co-producer, is the largest classical music concert broadcast live on television and radio in more than 31 countries, and representing approximately 41 million viewers.

The artistic performance was produced by the National Orchestra of France, the Grand Choeur de Radio France, as well as the Maitrise de Radio France. Founded after the Second World War, and intended for children aged nine and over, this high level musical training is one of the first experiments in the so called ‘half-time educational system’, combining general education and musical training.

“We are delighted to have been able to collaborate on this landmark event once again this summer, with a more prestigious solution than ever,” said the GB4D owner in conclusion.