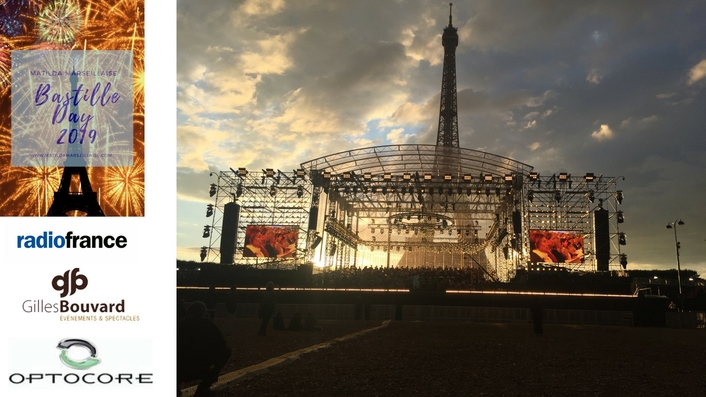 The Grand Concert de Paris, celebrating the anniversary of the storming of the Bastille,takes place every July 14 at the foot of the Eiffel Tower, in the Champ de Mars. This year, a crowd of 300,000 people assembled to listen to the concert live, while a record audience of 3 million viewers tuned in to watch the spectacle on television.

Specialising in the delivery of large-scale shows globally, Gilles Bouvard Events and Shows (GB4D) has been working on this event with Radio France since 2015. This year, thanks to a successful experiment, they extended the traditional site wide Optocore redundant optical fiber loop by deploying an additional 152 Optocore X6R preamps. 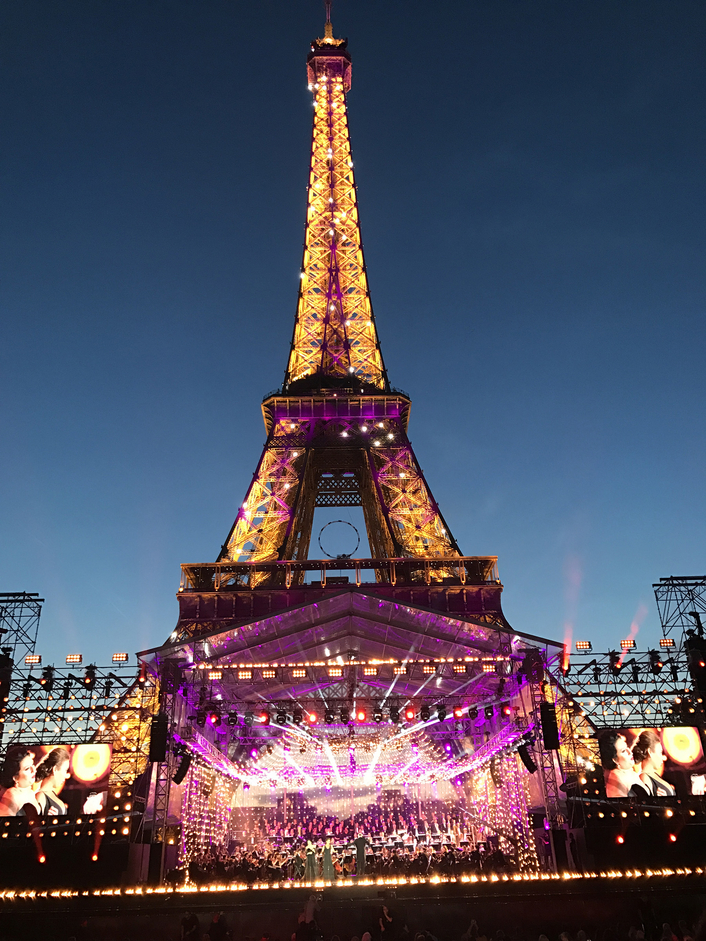 Explaining the reason, Bouvard said, “We had conducted several experiments with Radio France prior to the event, including the recording and capture of a jazz concert at La Maison de la Radio, with immersive sound, using a 22/2 multi-channel mix."

The idea had emanated from Radio France’s Pascal Besnard and Bruno Lompech, with the latter taking up the story. “Before thinking about mixing 22:2 specifically, I thought of the huge possibilities of audio network coverage that Optocore offered, and suggested it as an alternative to other more audio-oriented IP systems. We could envisage something far more innovative than a simple stereo mix to our FM transmitters.” 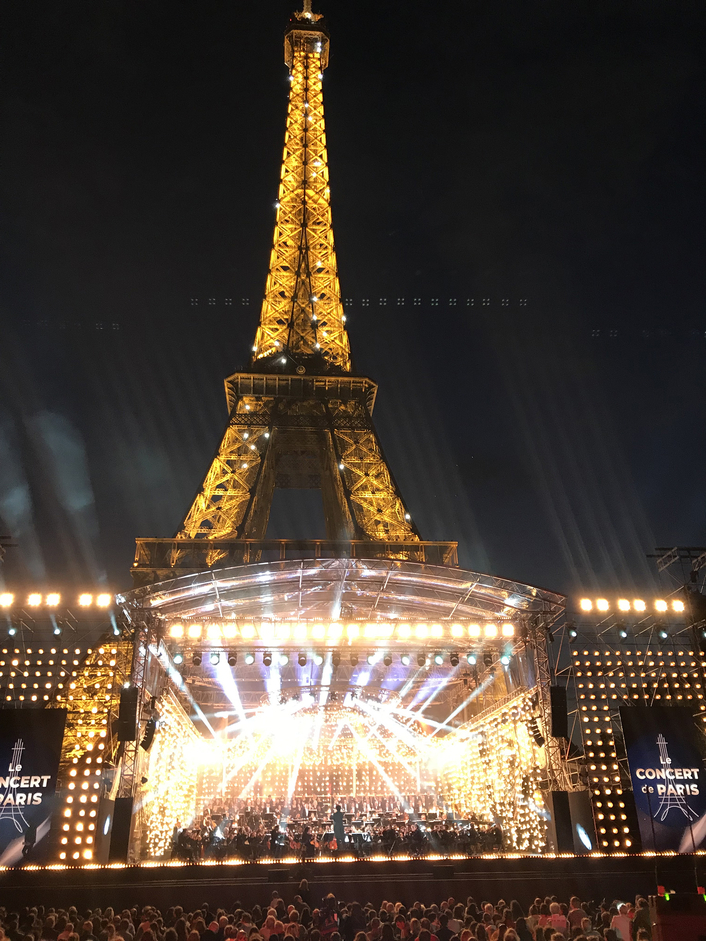 The audio recording was made using 48 Optocore preamps wired to a LAWO console for the antenna sound. The concert was mixed by a Yamaha Nuage post-production console for the immersive sound, all connected via a MUX22-IVT/MADI, for audio and video from Optocore sister company, BroaMan. Tuning in to the live concert in Studio 105, listeners were immediately immersed in a 16:2 sound field. Distribution of audio stems to the 18 inputs of the immersive sound converter was handled uniquely by the MUX22 IVT / MADI. 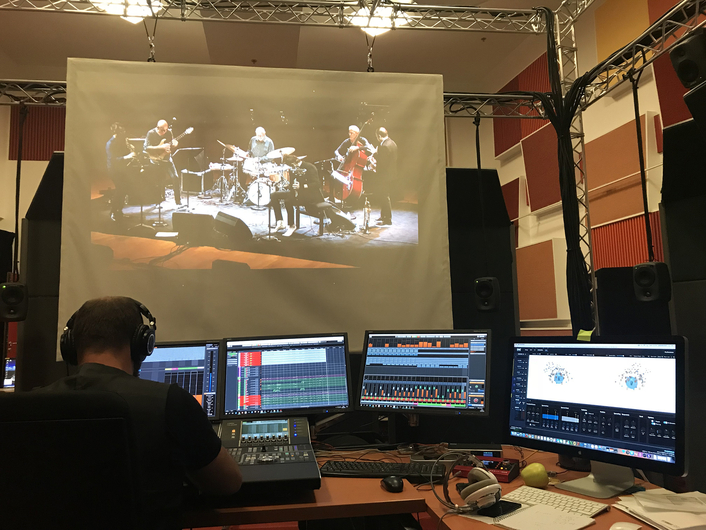 Meanwhile, a BroaMan Route 66 16/24 video router retrieved HD SDI camera signals, distributing video to the sound engineers in all studios, and broadcasting the concert to the Dailymotion video-sharing platform, with images and sound immersively mixed in 22:2.

As Lompech explained, “We distributed to other studios because ultimately we wanted to be able to operate any of our studio mixes to any or all of the mixing booths.”

The opportunity for such an elaborate mix both on the net, and simultaneously for Radio France’s Radio Frequency Modulation (FM Radio) antennas had been the brainchild of Radio France’s Hervé Desjardin. “This was all made possible by the quality of the Optocore preamps, and the speed of distribution of audio channels from one studio to another, with almost zero latency,” said Lompech. 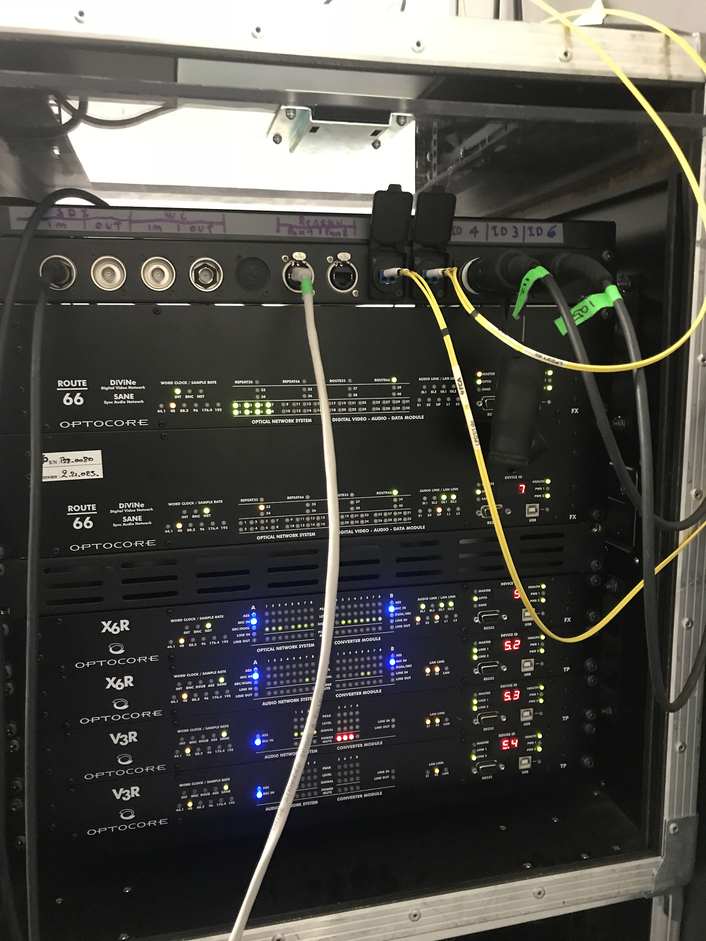 Once proof of concept was established, this BroaMan / Optocore topography was considered perfect for the Grand Concert in Paris for July 14th.

GB4D detailed 144 preamps for the stage—120 for FOH and 24 Dual Mic preamps for solo monitors. In addition, eight FOH preamps were used for the on-site public ambient sound, in addition to the live radio and television sound recording; at the same time a multitrack recording was performed on a 128-channel Pyramix from the FOH console, facilitated by the additional MADI ports (3 and 4) on BroaMan's bidirectional Video and Data MUX22-IVT/MADI converters, and M12—an Optocore MADI router with eight MADI ports.

The 5.1 OB truck on duty is already equipped with 120 LAWO preamps and is generally supplemented with Optocore preamps. "The quality of the Optocore preamps is extremely high, and so it makes no difference to Radio France’s sound engineers whether they use LAWO or Optocore preamps, especially when Optocore gain and phantom can be controlled directly from the LAWO console,” says Gilles. 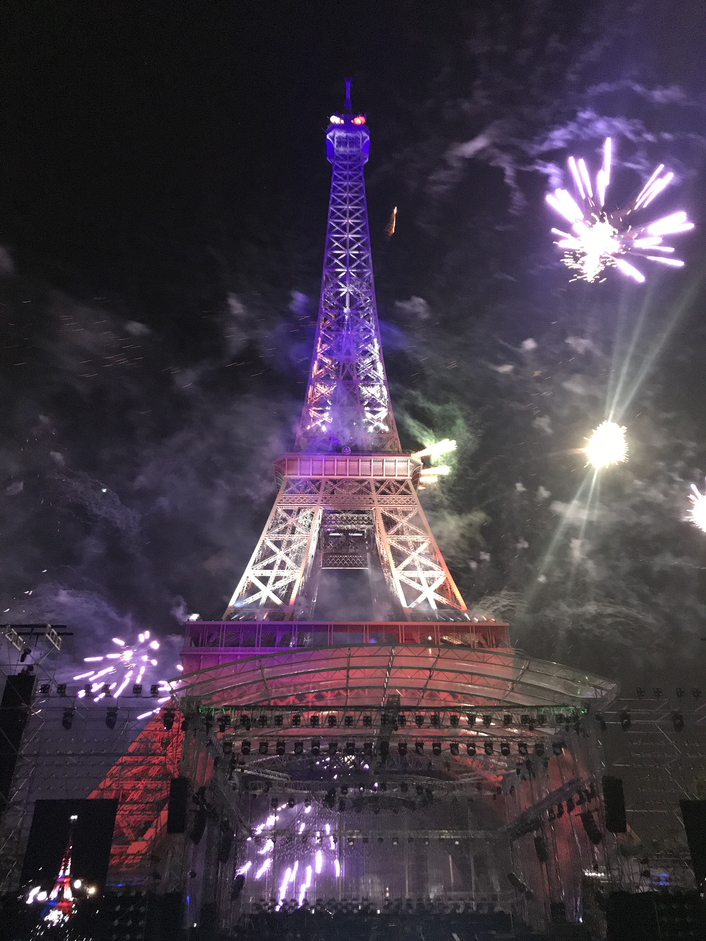 Laurent Fracchia, one of the sound directors at Radio France, realised the final sound mix for radio and TV. He had prepared a rescue mix of four stereo groups that was distributed in MADI in the Yamaha DM1000 as a back-up if necessary. The console was implemented on the Optocore network to manage TV commercials and wireless microphones for pre-show presentations, and was also used to broadcast the soundtrack of the fireworks.

In addition to X6R-FX-16MI and X6R-TP-16MI preamps for stage capture, GB4D used V3R-TP-8MI for ambience mics, while the Optocore network also distributed audio stems for the Adamson broadcast systems.

The France TV television channel was also connected by Optocore, the FOH broadcast processor interfaced in the network via a DD32R-FX for AES streams, and an X6R-FX for analog backup. The four mixing consoles were connected to the MADI network, with BroaMan MUX22-IVT/MADI and Optocore M12 interfaces.

Bruno Lompech said the Paris experiment had been “a complete success. We were able to prove that from a dedicated event to a media source, thanks to Optocore’s intelligent and transparent distribution we could create a multitude of events simultaneously.

“All this was made possible thanks to the commitment not only of Radio France, but also the control of the technology by the teams of GB4D. The possibility of passing the video via the network between all the mixing and listening points has brought us great satisfaction and convinced us of the quality of the Optocore and BroaMan devices.”