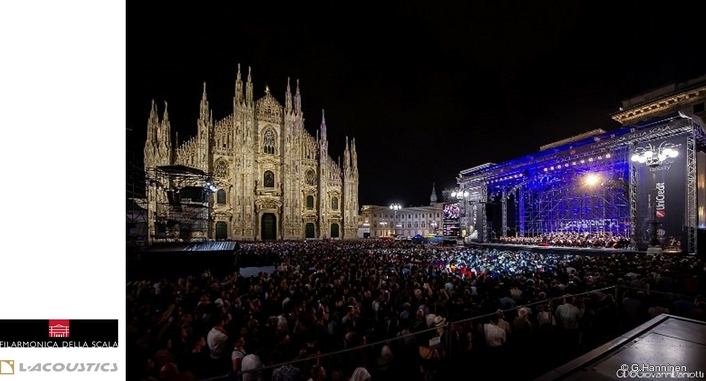 Each summer since 2013, Milan’s world-famous Teatro alla Scala has transformed Piazza Duomo, the Italian city’s central square, into an open-air concert hall where the Orchestra Filarmonica della Scala give a free classical performance forresidents and tourists. An L-Acoustics K Series system was supplied by Italy’s premier rental company, Agorà, which has provided audio and lighting to this stunning event since it first started.

Under the baton of maestro Riccardo Chailly, this year’s set list included Dvořák’s Symphony from the New World No. 9 in E minor and works from Italian composer, pianist and conductor Nino Rota, best known for his Federico Fellini and Luchino Visconti film scores. With 25,000 concert goers packing the 17,000m2 piazza and the evening broadcast live on RAI 5 in HD, Front of House Engineer Fabio Venturi was tasked with designing a system that would deliver even coverage across the entire space and provide an audio experience on par with the beauty of the music and the setting.

“I am generally aware of the plan for the concert around a year in advance, as the orchestra has a very long-term planned schedule,” says Venturi. “I work together with Agorà’s System Engineer, Daniele Tramontani, who is an authority in Italy in this field and has a huge amount of experience with orchestras projects. We usually start planning the system in March and the Filarmonica gives me full discretionary power on the audio setup.”

While the Filhamonica grants Venturi full freedom, it was vital that the maestro’s vision for the performance was fulfilled, so his ultimate goal was to achieve a satisfying sound level for every moment of the program, from the softest pianissimo to the most bombastic fortissimo. 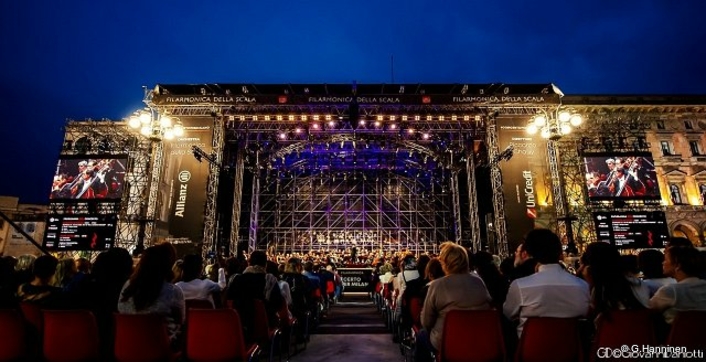 K1 and K2 were used for main and side hangs with Kara deployed for centre and front fills.

Venturi and Tramontani had a number of obstacles to overcome to achieve this. The piazza itself, with its monuments and ancient street lights, imposes architectural limitations, whilst tram traffic at its edges, which was not stopped for the concert, along with the substantial size of the audience would create a significant level of ambient noise.

“To reach our goal of perfect coverage and to preserve the quality of the sound throughout the performance, we focussed a lot of attention on the PA design well in advance of the concert,” Venturi explains. “L-Acoustics Soundvision 3D acoustical simulation software allowed us to achieve an accurate prediction of audience coverage in terms of SPL and frequency response, which saved us a substantial amount of time further down the line.”

The position of the main PA in relation to the stage, where more than 100 condenser microphones were placed for the orchestra, was also very important as it was vital to ensure there was sufficient headroom for the concert whilst mitigating bleed into the microphones.

“The presence of the ancient streetlights was limiting both in terms of finding the perfect position for the PA towers and to reach an optimal height,” Venturi adds. “We used different solutions to smooth out this problem, including hanging curtains at the side of the main PA to protect the orchestral microphones from picking up unwanted sound from the speakers.”

Venturi and Tramontani’s final design placed the main hangs of 10 K1 atop five K2 stage left and right, along with side hangs of 12 K2 positioned at the outer edge of each of the two screens that flanked the stage, and a centre fill of six Kara. Kara was also the choice for front fill - eight cabinets being placed at even intervals behind the scrim at the front of the stage - and delays. The latter were positioned towards the rear of the piazza and comprised two hangs of 10 Kara, one left, one right, covering the rear of the square, further hangs of 12 Kara either side to cover the rear sides and a hang of eight as a central delay. 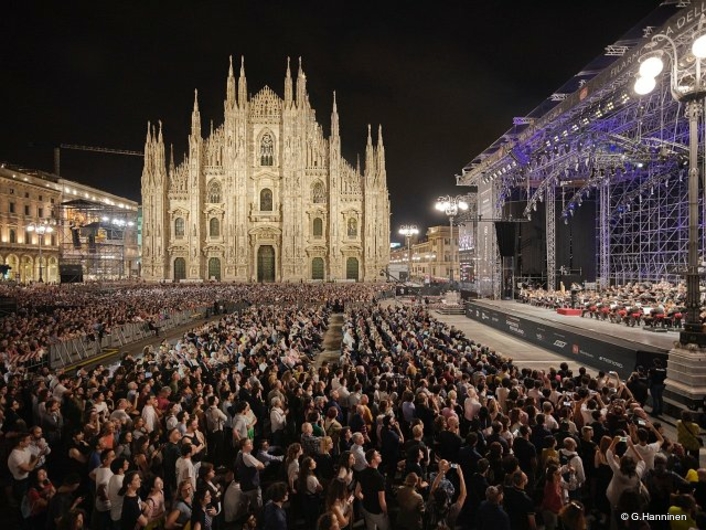 Venturi reports that the results achieved were exactly as predicted in Soundvision and, most importantly, that Riccardo Chailly was delighted with the results he, Tramontani and the Agorà team had achieved.

“The maestro was able to listen to the concert’s rehearsal, which was directed by his assistant,” concludes Venturi. “He was standing in the square, moving to different positions to make sure the coverage was the same across the entire piazza. He told me his overall impression of the audio was excellent. We had achieved our aim and the Agorà team and I were delighted!”