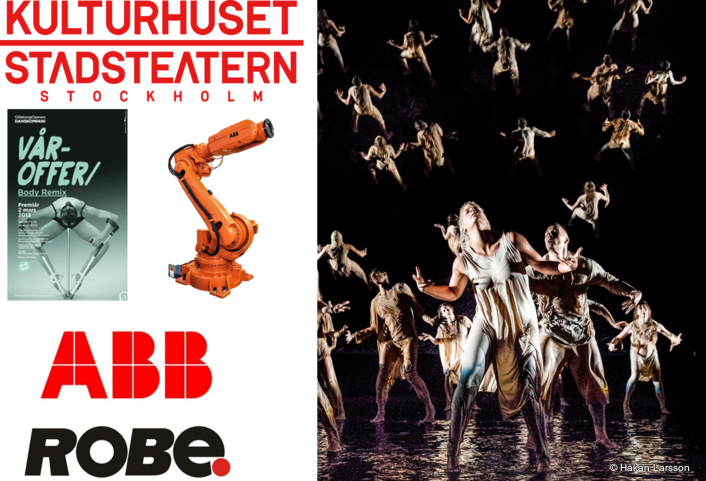 As the worlds of humans and machines collide and the relationships between nature, technology and artificial intelligence become daily more inextricably intertwined … urban dance impresario Fredrik ‘Benke’ Rydman made this mutually dependent alliance the subject of his amazing “Varoffer” performance, which has just completed its run at Stockholm Kulturhuset Stadsteater in Sweden.

Two radically different and beautifully fluid pieces made up this seminal work – the first a 40 minute ‘solo’ performance by Benke dancing with an industrial robot to a specially composed  new soundtrack by Johan Liljedahl and Carl-Johan Rasmusson; and the second comprising 20 synchronised street dancers moving to Stravinsky’s ‘Rite of Spring’ in 5000 litres of water with a massive mirror suspended above the stage bouncing their images back into the audience to appreciate their symmetry and formation skills.

Imaginatively lit by Palle Palme, Robe BMFL Blades, LEDWash 1200s and ColorSpot 700E ATs together with other luminaires all played a vital part in this breath-taking show which took the concept of performance art and technology to new levels.

Palle has worked with Benke since 2003 when he was in the Bounce Streetdance Company including for their global hit “One Flew Over the Cuckoo’s Nest” which toured worldwide, plus several other invigorating projects which always push creative boundaries due to Benke’s ability to think out-of-the-box and take audiences on extraordinary journeys!

Palle joined the Varoffer creative team around 9 months in advance, and the initial discussions with Benke involved an in-depth outline about how the show should look. They established a workshop complete with scenery and lighting fixtures several months before the opening which allowed them to experiment with various products and techniques. 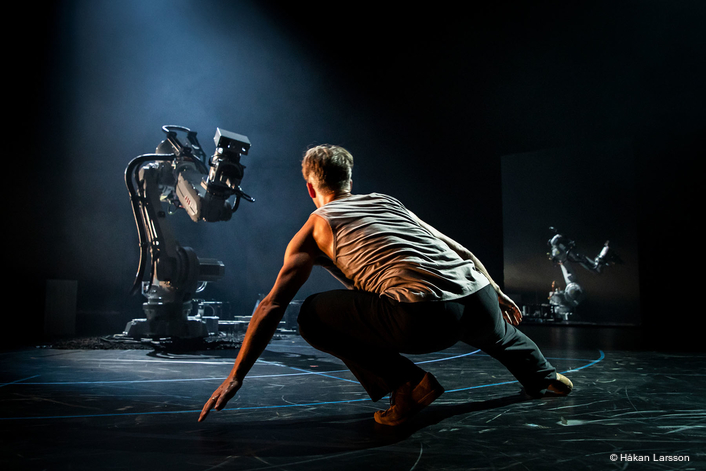 Palle – who frequently uses Robe products in his design work – knew well in advance that he would have to use the Stadsteater’s house lighting rig as they play in rep and therefore change shows most days.

Both acts of the piece played in specific areas on the stage – Benke and the Robot performed in an area approximately 8 metres in diameter, while the Rite of Spring dancers occupied a space around 12 metres on a custom 5 cm deep carpet filled with a 3 cm draft of water on which they slided and glided.

Palle used two of the 11 BMFL Blades as low side and front light, with five BMFL Blades on LX bar 0 also for front lighting, and four of the fixtures on the over-stage trussing. 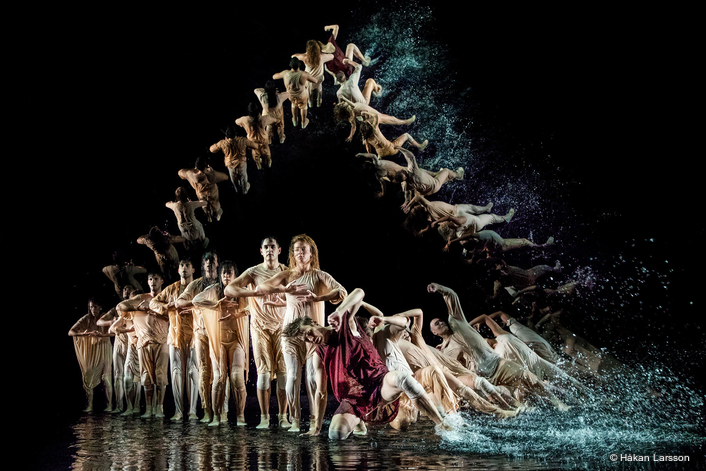 Palle used two of the 11 BMFL Blades as low side and front light, with five BMFL Blades on LX bar 0 also for front lighting, and four of the fixtures on the over-stage trussing.

The 24 x LEDWash 1200s were also dotted around on the overhead trusses, while the older ColorSpot 700E ATs – among the theatre’s original purchase of Robe fixtures – were hanging in side-stage positions.

The first act with Benke and the Robot was extremely intense, and all the Robe units were used very sparsely, primarily one BMFL Blade at a time for back-light, catching Benke and the Robot in the path of the cross beam, gently fading in and out in rhythmic harmony with the music and the movement.

Palle confirms that he would have chosen BMFL Blades even if they had not been part of the house lighting rig - “for the trim height, we needed something powerful and flexible, so it hit the spot”.

For the second act more lighting came into play, although Palle had to be extremely strategic in where these sources were positioned … because anything overhead reflected and refracted off the mirror above the ‘pool’ of water!

He utilized the lighting budget to have 20 special low-rise side-lighting towers built, accommodating a total of 120 x static profiles which allowed him to hit the dancers in the pool in a variety of different coloured whites without catching the water in the light. Some of these had super tight shuttering so only arms or legs were caught in the highlights, all adding to the sense of suggestion and mystery. 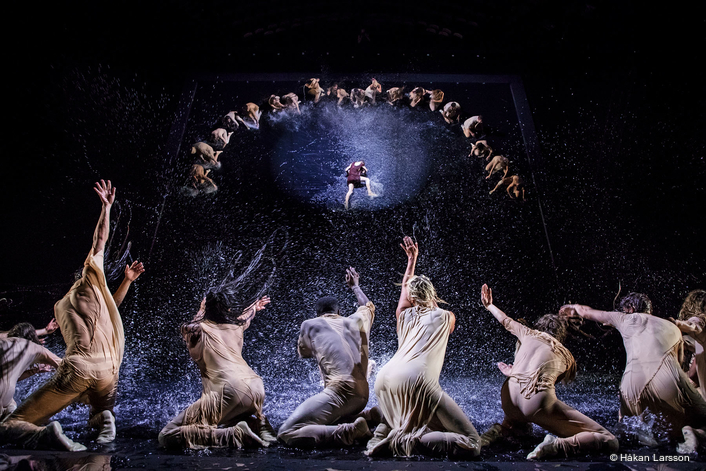 The challenges of lighting Varoffer included the diverse nature of the two acts with almost no changeover time … both needing totally different lighting treatments. “I had to be smart with how I used the whole rig, and which elements could be used in both acts” he says, adding that he was delighted with how the ploy succeeded!

The extensive technical rehearsals with the Robot also helped enormously and enabled them to realise that sometimes Robots have their own ideas about where to perform!

Dance is one of Palle’s favourite genres of performance to light and every cue in this unique performance was inspiring for him.

He recalls that when he does a standard musical, he will typically have multiple cues for the music and for the positioning of the cast … however with this one, he probably only had around 60 positional cues for each act, so each and every one of them had to look fantastic!

He also enjoyed being back at the Stockholm Stadsteatern for his second show there, following a production of ‘Chicago’ a few years back.

He utilised their ETC Cobalt lighting console, worked alongside “excellent” house programmer Pekka Hellsten, and was also “assisted enormously” by the venue’s head of lighting Anders Tuvesson who shared Palle’s passion and enthusiasm for the show and helped in every aspect related to the lighting rig. 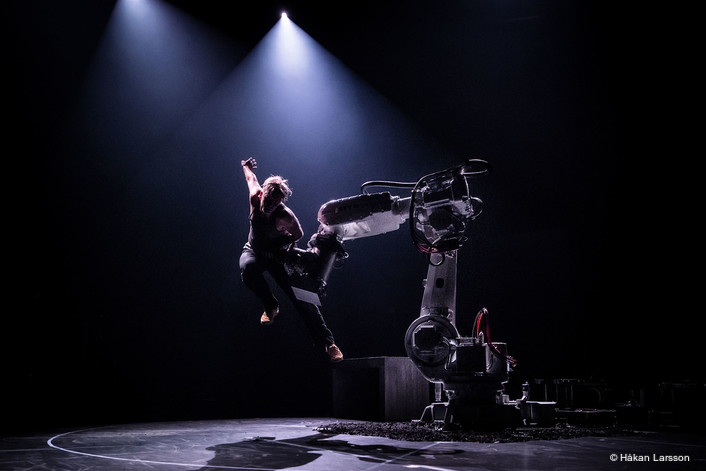 IRB 6620 was created by leading Swedish industrial robotics manufacturer ABB, based in Västerås, and it took them, specialist robotic programmers Robotdalen and Benke around 80 days to prepare all of IRB 6620’s moves for the 40 minutes long stage piece! This process was initially completed in a warehouse in Västerås. 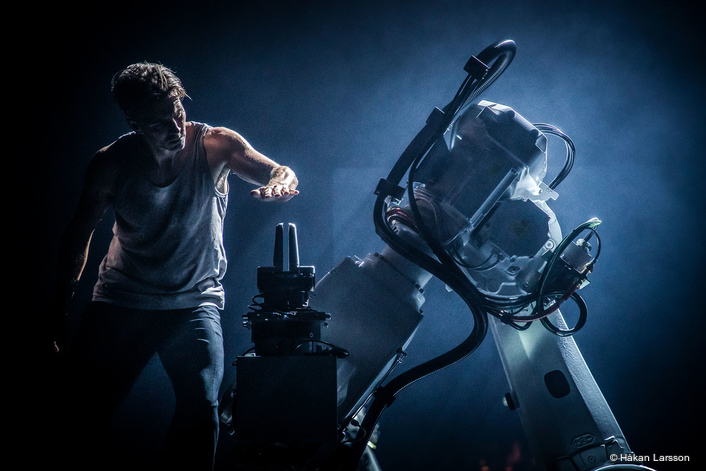 A 10-hour day rehearsal gave them 30 seconds of the show – performance art being totally alien to IRB 6620 which had to learn how to dance from scratch!

That was also just the beginning phase of the rehearsals! When IRB 6620 was installed in the theatre for the first time, they spent almost as much time again on stage, with rehearsals and sorting the numerous technical challenges!

IRB 6620 required two technicians standing-by on each side of the stage each time the show went live, watching the action intensely and ready with an ES button to stop the machine immediately if there was an anomaly in the dance like a slip or a wrong directional approach … as IRB 6620 could not detect any potential human errors alone!

On this exceptionally tight choreography Palle commented, “I cannot imagine this being attempted by anyone other that Benke – he is a complete genius!”