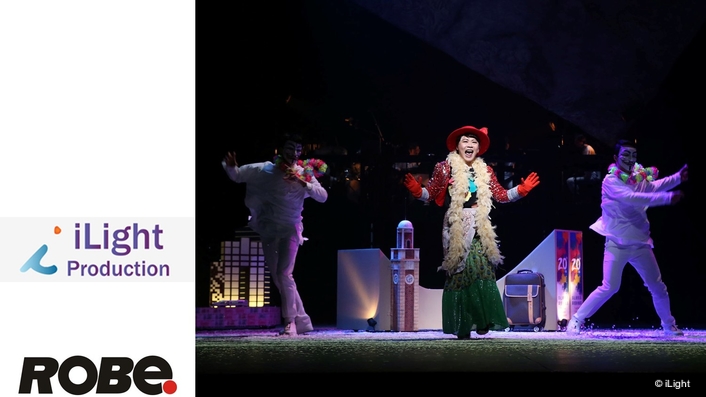 iLight is a busy and dynamic Hong Kong based rental company which specialises in supplying lighting design, equipment and expertise to a diverse range of theatrical, cultural, performance and events projects.

Founded in 2009 by Wheel Lo and his business partner Kwan Kwan Wong, they now have a full time team of 10 plus a pool of over 70 skilled designers and technicians helping to service a busy schedule, each time delivering fresh and imaginative visual concepts to their client base.
In 2017, iLight started purchasing Robe products from Hong Kong distributor ArcSource Ltd., and now has BMFL Blades, Spiiders, DL7S Profiles, DL4F Washes, CycFX 8s and ColorStrobes in stock … which are all being used regularly. The plan is to make more purchases later this year!

Wheel graduated as a theatre lighting design major from the Hong Kong Academy of Performing Arts, then cut his industry teeth working as a lighting technician and stage manager at the famous Hong Kong Cultural Centre.
This was an ideal training ground and a lively creative environment as well as a prime opportunity to make contacts in pursuance of his dream to be a lighting designer.

Around five years ago, Hong Kong Cultural Centre had its first introduction to Robe when one of the regular lighting rental companies arrived for a show with Robe LEDWash 1200s. Wheel scoped out the product and was impressed with the build quality, but it wasn’t until a couple of years later, when he met Raymond Wong of ArcSource, that Robe really appeared on his radar, and he ‘got the bug’ for the brand!
The premium end of the moving light world in Hong Kong he explained … had been dominated by two competitor brands for over a decade, in his opinion, none of them specifically appropriate for theatre, and he also felt it was time for a change! 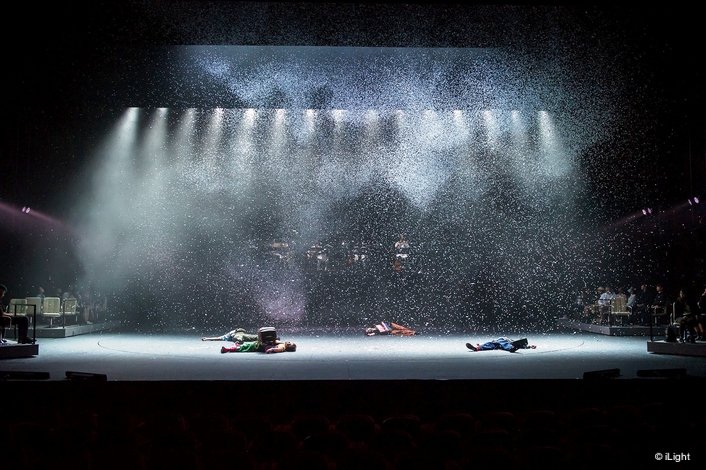 Raymond Wong at ArcSource was in turn introduced to Wheel by an ex-classmate working in his office … as Raymond was scouting for someone to take on training and product awareness in schools, colleges, educational establishments, churches, etc.
At that point, Wheel looked closer at the Robe product range.

Raymond highlighted the innovation and crafting and functionality that went into every Robe product’s design. “It was very clear that things had moved on substantially in recent years” stated Wheel, who was particularly struck with the BMFL Blade and the DL7S Profile.
“These two products were exactly what we were looking for - properly geared to theatre and sophisticated - in the quest to find new and inventive moving light technologies for performance,” he explained, starting to get excited by the whole prospect.

That was in 2016, so Raymond then invited them to Prolight & Sound Frankfurt the next Spring, which was followed by a visit to Robe’s factory in Valašské Meziříčí, where Wheel saw the production lines and R ‘n’ D in action first hand.
He was “extremely impressed”.
He also thought the lightshow in the Robe demo theatre was the icing on the cake in terms of seeing and appreciating the effects of the products in situ, “it showed the full power of the ranges and created an authentic theatrical atmosphere”. 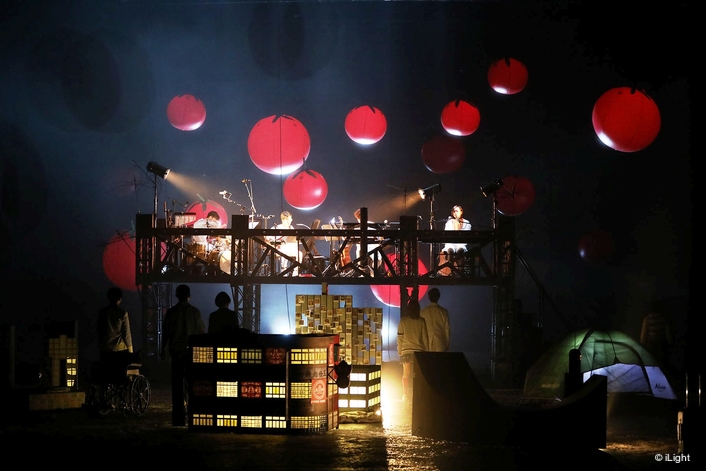 As soon as Wheel and his crew arrived back in Hong Kong, they made the first order and were all very enthusiastic about the Robe fixtures.
In the BMFL Blades, the brightness is “far greater” than the previous competitor product. Wheel also applauds the good gobo design and the smooth shutters, features essential for any self-respecting theatre production! The six facet linear prism is “cute and different” he quips.

The DL7S Profile, they appreciate as a luminaire designed specifically for a demanding theatre / performance environment. As a low power consumption LED lightsource it’s also ideal for some of the older venues in Hong Kong where power is limited. The fixture also stays cooler than discharge lamp moving lights, so generates less heat which can become an issue in some smaller venues.
The DL4F Wash, he declares, is the most “Theatrical” wash on the market! “The smooth edge of the beam is really like a typical Fresnel lantern” he enthuses, adding that the inbuilt barn door means the DL4F “can completely replace” the original tungsten fresnel in theatre. Low power consumption and cool temperatures are again advantages and the size and weight of the DL4F is “perfect” for smaller scale performances in school halls, churches or the medium sized theatres of around 400-seats … without any compromise on quality or features.

The Spiider is truly his current favourite fixture!
The wide angle, the colour saturation, its incredible 13.3Kg weight, small size and effects are super-impressive,” he states, adding that it can be used as a general wash, where just four pieces in an upstage position can cover as much as a 12 metre wide by 10 metre deep stage for a standard theatre production. As an effects light it can be used for engaging audiences at concert and events. 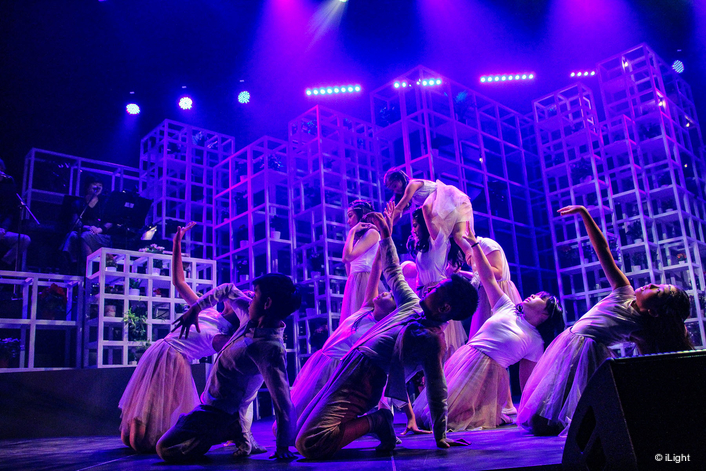 They were considering buying a colour scroller option for their existing strobes when Wheel and his team saw the Robe ColorStrobe for the first time … and were literally blown away!! “The output is amazing” and apart from the strobe function they are using it regularly as a rock-style blinder. Wheel observes that two ColorStrobes will effortlessly illuminate an entire 2500 seat auditorium!
Last but not least are the CycFX 8s … which he thinks are a very simple idea that has a brilliant effect, great for back lighting and shooting up – or down – scenery and softs / cloths.

He feels that a lot of thought goes into Robe’s products, and that they are producing technology that is “that bit more special” than some of the other manufacturers.
Wheel also underlines that good service is critical in the whole brand equation. “When you make a commitment, you need to know that you will be fully supported. After sales is absolutely key, which is also why we chose to go with Robe, he stated.

iLight’s Robe fixtures are constantly in use on a diversity of shows and events. Wheel recently designed lighting for singer K.C. Lee’s “Share with You” concerts at the MacPherson Stadium and for cult hair-stylist and guru Guy Tang who recently toured Hong Kong to showcase his coolest new hair products. 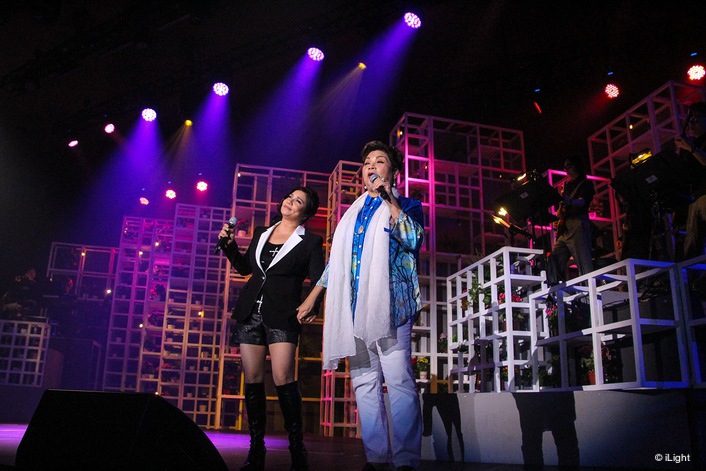 LD Gabriel Fung lit “No Place Like Home” by the Windmill Grass Theatre Company at the Kwai Tsing Theatre and LD Leo Sui will use BMFL Blades and other lighting supplied by iLight for an upcoming production, “In Time of Turmoil” staged at the Hong Kong Repertory Theatre … and there are numerous others as the company fulfils a hectic schedule.
After a year of utilizing Robe products in the field and getting them in front of a lot of people, the iLight team concludes, “The feedback has been very positive and we’re looking forward to investing further and to seeing more interesting products in Robe’s future pipeline.”