Entertainment engineering specialist WIcreations specified and fabricated two large and spectacular set pieces – a water fountain and a Tree of Life - for the highly acclaimed Opening and Closing Ceremonies of the 4th Islamic Solidarity Games, a multi-national, multi-sport event staged in Baku, Azerbaijan from 12 to 22 May 2017. WI’s team, project managed by Yves Vervloet, was working for Betty Productions Ltd. who co-ordinated all the creative and technical production elements for the ceremonies on behalf of the Islamic Games Operations Committee.

The ceremonies both took place in the 70,000 seater Baku National Stadium, a venue already familiar to the WI team after their ground-breaking work there for the 2015 European Games.

The water vessel and the tree – integral parts of production designer Thanassis Demiris’s visual treatment for the two ceremonies - were realised and constructed at WI’s HQ in Heist-op-den-Berg, Belgium over a two month period. Approximately 60 tonnes of kit was road-freighted to Baku on five trucks.

The 8 metre diameter water bowl was an essential part of the Opening Ceremony (OC) set and narrative.

The Games were officially opened by Azerbaijani President Ilham Aliyev amidst an array of dancers, musicians, fireworks, horses, camels and donkeys. The teams of the 2800 athletes were led onto the field-of-play by women carrying water collected from around Azerbaijan … which was poured into the massive bowl.

Weight calculations were crucial, as the loading data for the stage perimeter at the point where the bowl was located was 17 tonnes, so the piece - complete with water - could not exceed that.

The base was constructed from a 200 mm high rigid steel frame with custom steel-flanged castors … which alone weighed 1.7 tonnes. It was designed to take 15 tonnes of water in tanks below and still be manually movable (into the final stage position) via a pair of 30 metre steel track beams that were integral to the stage structure. 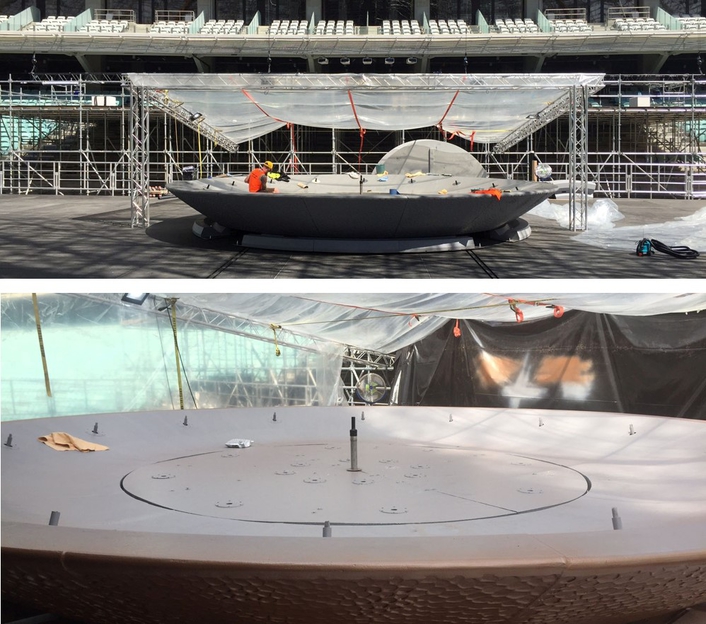 The tracks were built to WI’s spec by Stage One Technologies – who constructed and delivered the stage.

Sitting on top of the steel frame base was a 4mm aluminium centre section housing all the pumps, pipes and connections. This was covered with a removable aluminium hatch to conceal all the technical apparatus.

Four small hatches were made in the middle of this centre section which could be opened during the filling process – to relieve the vertical water pressure as the tank filled.

The bottom of the bowl itself was made up of 16 x 3D cut Styrofoam segments reinforced with an aluminium framework and were fixed on to the aluminium centrepiece.

To achieve the required authentic hammered copper finish, Yves and the team conducted several tests before producing a laser-cut plastic plate surface which was glued onto the exterior of the 16 segments making up the bowl.

Each piece was then sprayed with a 4 mm Polyurea hot spray coating (as used in swimming pools). The heavy viscosity of the hot spray gave the authentic rounded hammered look on the outside and a smooth interior surface … just as the creative team had requested. 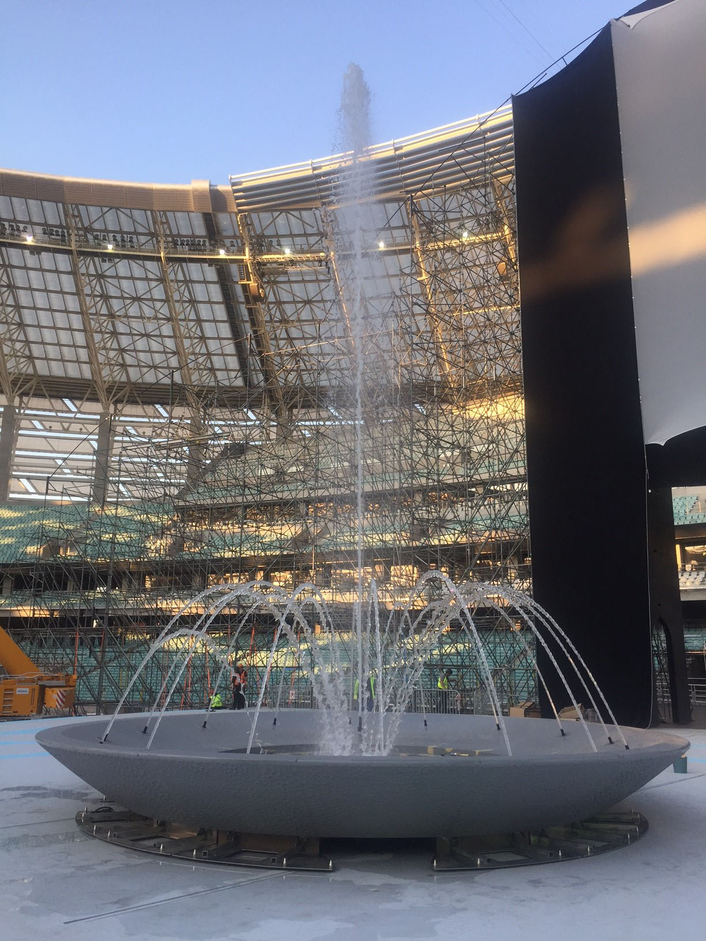 “The result was absolutely perfect,” commented Yves with some satisfaction.

The final copper metallic finish was sprayed onto the water fountain on site in Baku.

When it came to designing the pump section they needed to achieve three main effects – a swirl, 16 x 3 metre high outer jets and a 10 metre high central jet.

WI has built some water effects before – notably for Russian superstar Philipp Kirkorov’s 2016 tour - but nothing on this scale, so for this aspect of the project, WI enlisted water effects specialists, The Crystal Group from Paris.

Sub-stage, a basin was built to hold the 20,000 litres of water and inside this pool, two quick-fill pumps were connected to the vessel via a Camlok system.

Inside the vessel were 24 pumps. Sixteen created the small perimeter sprays of water, one dealt with the central jet effect, eight made the swirl effect … with one empty pump as contingency for backup. All the pumps were DMX controlled via a single channel … and programmed and run from a ChamSys console.

It took 6 days to build the water vessel on site in Baku. The empty weight of the final piece was around 3 tonnes, and 12 tonnes of water were utilised for the performance. 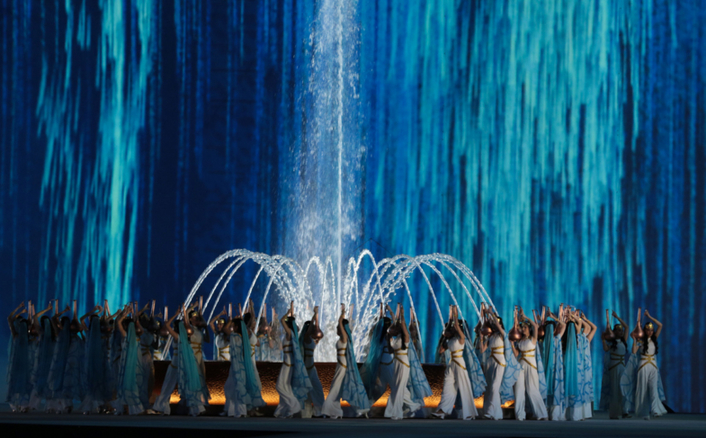 It was pushed into show position – via the 30m tracks – manually by the stage crew. Once located, three hatches opened in the stage to allow the crew to hook up the water FX pumps and the two hoses to commence the water filling … via 7 x Harting connectors.

For the stunning Closing Ceremony, the stage set was laid out in a grid referencing the geometric designs and precision that are characteristic of Islamic art and found in traditional Azerbaijan carpets. The water bowl was used again – reassembled for a second time … and right beside it, centre stage, was an impressive 27 metre tall Tree of Life.

The crown of the steel tree was 18 metres in diameter and its base measured 12 metres. It involved approximately 2000 bolted connections, weighed a mighty 25 tonnes and needed 22 tonnes of ballast to ensure stability.

The bespoke base was constructed from elements of WI’s standard rental towers system with some special adaptations.

The tree was designed in 8 sections, horizontally divided so they could be craned up and fixed on top of one another. Each section was in turn divided into 12 frames that also bolted together.

On site, it was assembled in two shifts. The first one saw the base frame of the tree built, and the upper crown complete with all the branches. The leaves were supplied by Stage One and these alone required a 24 hour shift to be attached to the upper crown! 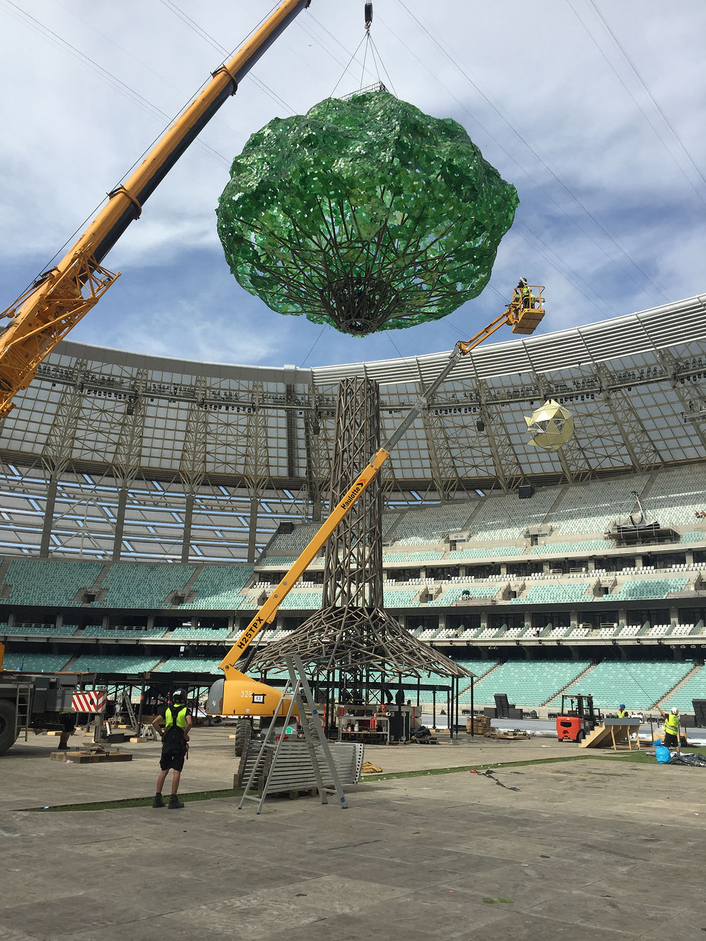 In the second shift, the WI team built the roots, trunk and the water vessel … and then oversaw the most challenging aspect of the tree build – the crane lift of the 8 tonne top section (upper crown) .. complete with leaves.

It had to be achieved in one lift, a truly impressive manoeuvre with some seriously expert crane handling, which saw many dropped jaws on site … even from the most seasoned technical and production personnel!

After that, the fabric materials and finishing were applied to the trunk.

The entire CC set was installed in just 36 hours, following the end of the final Athletics event on 20 May.

The CC was energised by a cast of 1500 plus volunteers, with music performed by over 100 musicians with traditional and contemporary pieces written by Azerbaijani composers and six music acts who also helped celebrate the 10 days of excellent sport.

The OC and CC were created by Betty Productions Ltd – led by director and executive producer, Catherine Ugwu and artistic director Nathan M. Wright. The production designer was Thanassis Demiris, lighting was designed by Adam Bassett and the visual content director was Richard Lindsay. 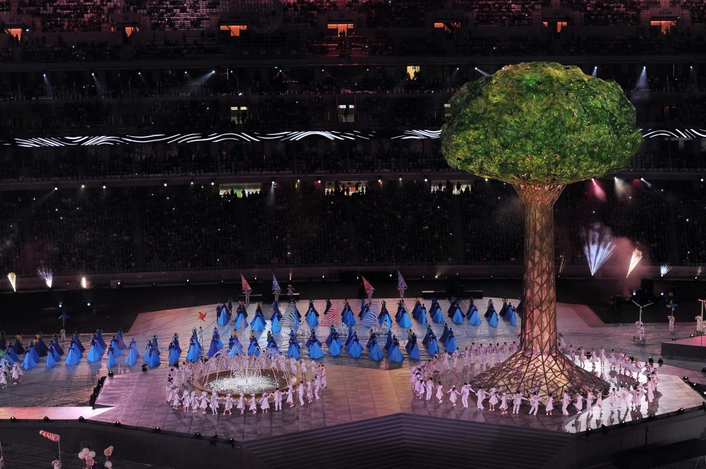 Says Yves, “As a company, WIcreations was extremely proud to be part of these two world class events, which united some of the best and most creative international technical talents available. It was a pleasure working with Betty Productions and their great team … we all enjoyed the challenges, the hard work, the brain-teasers  ... and the amazing final results!”