Lighting designer Björn Hermann lit up the Austrian sky with more than 100 Claypaky luminaires for the recent Linz Klangwolke, or ‘Cloud of Sound’, held along the banks of the Danube. The open-air multimedia event, a mix of music, performance and visual art, has been a highlight of the city’s annual calendar since 1979. The Klangwolke presents a different theme each year, and to celebrate the 50th anniversary of the Johannes Kepler University Linz, the 2016 edition was presented under the ‘River of Knowledge’ banner.

A crowd of around 100,000 gathered along a 500-metre stretch of riverbank and was immersed in music specially composed for the free event. This was accompanied by lighting, lasers, video projections, pyrotechnics and extravagant scenery. The show was conceived by media artist Salvatore Vanasco, with technical planning and implementation by PRG XL Video.

Hermann, who worked closely with production manager Uwe Buhrdorf of Wellenmaschine on the event, used a total of 120 Claypaky Mythos hybrid lights as part of his design, which covered an overall distance of 1km along both banks of the river.

The Mythos is a highly advanced hybrid light, it can be used as both a spotlight with a zoom that ranges from 4° to 50° and a beam light with beam angle of just 2.5°. The large 160mm diameter front lens allows the beam emitted from the Mythos to remain parallel for its entire length, even at great distances.

Such a large fixture footprint meant that Hermann relied on the use of W-D DMX transmission paths to convey the technical data needed for his design. 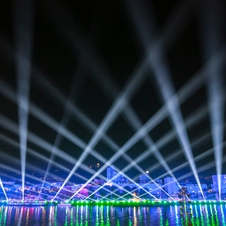 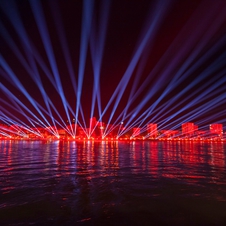 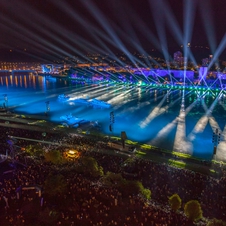 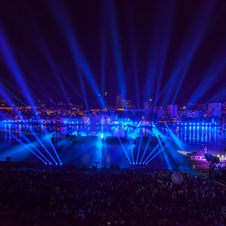 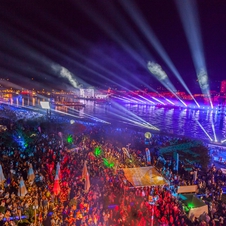 Since there was no rehearsal time on location, the whole show was pre-programmed in wysiwyg at Hermann’s lichtdesign studio in Berlin. On the show day, two grandMA 2 full-size consoles and one grandMA light 2 were used to programme and control the show.

According to Buhrdorf, the challenge was to explore the theme of education and present that story to the visitors gathered at the Linz Danube Park, with just one chance to get it right. Fortunately, the show went off without a hitch, the weather stayed fine, and both Hermann’s lighting design and Claypaky did justice to the long and rich tradition of Linz Klangwolke. 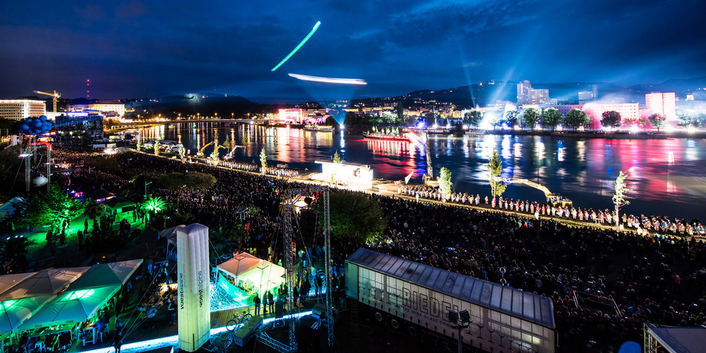