Nocturnal Wonderland was held for three days at the San Manuel Amphitheater in San Bernardino, California.  “Each stage had its own style dictated by multiple factors such as musical genre, site location, structure and the artists’ riders,” says Lieberman.  “It was critical that each environment had its own unique set up.  We needed to make sure that the stage was lit, the artists were lit and we had proper coverage while, at the same time, giving the stage a personality.  Additionally, the overall theme of this year’s show was UV, so on every stage and throughout the festival site we installed hundreds of UV fixtures with UV paint for scenic details.” 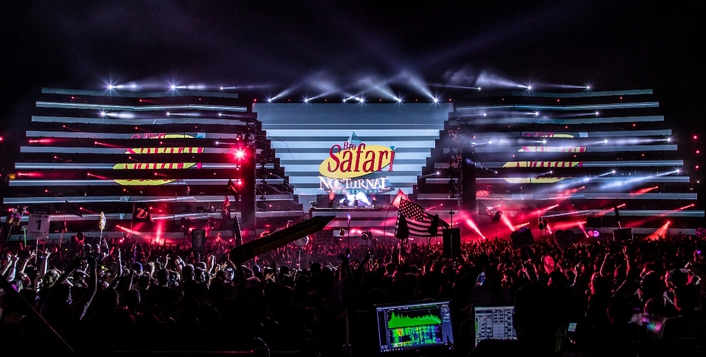 The big, scenic Wolves’ Den stage was designed to “overwhelm” the audience, according to Lieberman.  “It was monolithic; the audience felt like they were standing at the base of a mountain.”  He used 50 Clay Paky Mythos and 76 Clay Paky Sharpy fixtures to highlight the expansiveness of festival’s main stage for dance music.

Lieberman used four Sharpy washes in the Sunken Garden.  This stage was designed to feel “more underground, darker, moodier,” he explains.  He also hung North America’s largest disco ball in the middle of the tent to create a nightclub-style vibe.  “There was no video on this stage so it was really all about creating an old-school club atmosphere.”

The new 360º Labyrinth stage was built of bamboo.  “Since we had to accommodate live artists as well as DJs on this stage lighting the scenery and custom signage was very important,” says Lieberman.  “After the scenic elements were handled we created a big stage design to create a ‘wow’ factor for the audience – these shows are dance shows and are dependent upon audience participation so giving them lights and visual displays are critical.”

Temple Noctem, for fast, hard-style music had a “very punchy look front loaded with moving lights, strobe and video,” he adds.  “This music is truly a sub-culture within a sub-culture.” 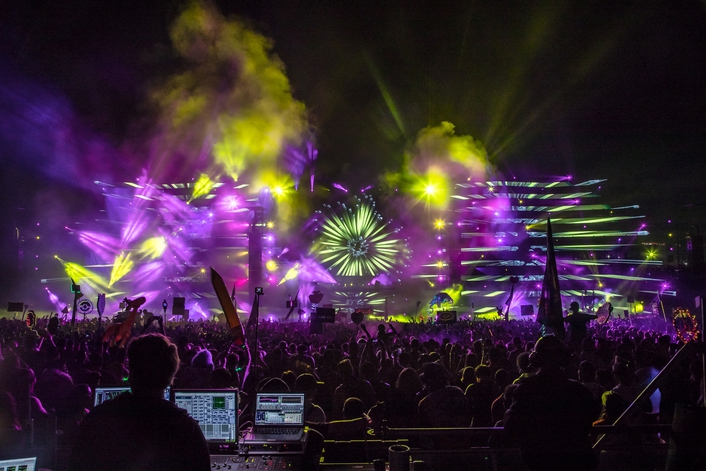 Lieberman calls the Clay Parky fixtures “the top of the food chain, the Ferrari of the lighting world.  Mythos were used as our primary profile unit: They have a great zoom range, some of the best optics on the market and excellent stock gobos that worked well when texturing the audience. Sharpys are the staples of the lighting industry – truly, some of the most amazing looks that came out of a stage were anchored by massive beam focuses.”

He notes that the Clay Paky fixtures performed “fantastic” throughout the weekend under hot weather conditions.  “You’ll never hear me complain when we have them on stage, and the performers and guest DJs loved them too.”

Francesco Romagnoli, Clay Paky Area Manager for North and Latin America, added, “Mr. Lieberman has been a collaborator of ours for many years and we are always happy to support him.  Nocturnal Wonderland is another example of his great work.”