The 2017 NYE Celebration From Times Square 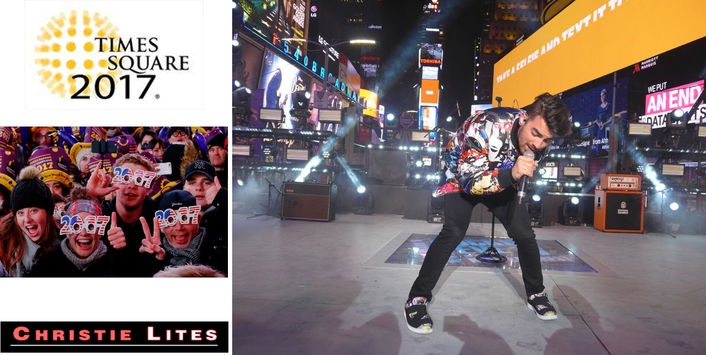 For the past 17 years, LD Paul Miller has directed the lighting of the “New Year’s Eve Celebration From Times Square.” Over the last four years, Christie Lites has been right there beside him, supplying the latest in lighting equipment and 24/7 support. It’s a live, six-hour gig for the production team, which must wrangle with winter weather, the ticking of the clock to the midnight hour, and the knowledge that billions worldwide are watching.

When Miller lit this event in 2000, there was just one stage, and each network also brought in their own stages, cameras and broadcast trucks. It was soon consolidated into one setup. Now every artist performing outdoors for various networks does it on these same stages with this same lighting rig.

Miller explains, “So we’ll light a cast of a Broadway show performance. Then that director leaves and the ABC director comes in and we’ll do, for example, Taylor Swift or Carrie Underwood. So it’s not just the Dick Clark’s Rockin’ New Years’ Eve - there were three shows that went out on the air with their own directors. It is a bit unconventional.”

There were two stages this year: the main Countdown Stage and the Sponsor Stage. Miller was responsible for lighting performances on both stages by Gloria Estefan and the cast of her Broadway musical On Your Feet!, Gavin DeGraw, DNCE (Joe Jonas), Thomas Rhett, Mariah Carey, Rachel Platten, Silento, Luis Coronel, Lupillo Rivera, Don Omar, JoJo Abot, The USO Show Troupe and more.

First, he has to figure out fixture placement for the cameras. He has up to 18 camera positions - including a helicopter hovering overhead, and dedicated placements such as atop 1 Times Square six blocks away. “So those cameras establish a long, iconic view of Times Square for the TV audience.”

While six or seven cameras capture the Countdown Stage, it’s important that the view of the crowds and Time Square are not blocked by big lights. ‘We don’t want to minimize the view or block camera shots of the iconic Times Square at night, so it’s challenging to get lights at all the right places.”

Plus, gigantic digital signage advertisements now loom large over the area, flooding his stage with ambient light. “There weren’t LED signs when this got started. Now our stage has to compete with a flashing advertisement, and if the sign turns green, then I have green side lights,” he jokes.

“At the same time, while it is an iconic event, if you took the long shot from 42nd Street, with all the signs lit up in Times Square, our little stage looks insignificant. So we do a lot of tricks to draw attention to it, to a stage in the middle of this area.”

Miller also has to be ready to light the onstage talent from all angles if they decide to turn around and play to the downtown crowd.

His choice in lighting gear is crucial as well. Eye-candy for the cameras keeps the broadcast exciting for the crowds at home.

“Every year there’s a newer, sexier light to try. Not all the shops carry it and we want to keep the look of the show on camera fairly contemporary, so in the last few years, Christie Lites has had a lot of the latest products,” Miller notes.

This year’s Christie Lites rig included a fair amount of Elation gear including Platinum Beam and the ELAR 108 PAR (RGBW). There was also a large quantity of GLP fixtures, including Impression X4S and the X4L bars, which looked “really sexy” on camera and allowed Miller to keep the stage view open for cameras and the crowd.

“Sometimes we acquire a flashy light that we can’t use because the artist is singing ballads and the songs don’t call for that effect,” he says, explaining how he looks for multi-functionality fixtures. “We have to use most of our bells and whistles for every number, so we can’t use an iconic fixture look repeatedly.”

On a branding scrim, he used Sharpys and LED strip lights to catch the camera lenses. “I can also grab all the moving lights and strobe them to sparkle at the camera, so it draws attention.”

Citing 57 universes of DMX, he notes, “Our rig is so complicated and spread out through Times Square and our schedule is so down to the minute, moment to moment. Not too many people do shows for six hours in a crazy, uncontrolled environment. People would be amazed at how on the fly it is; surprisingly, a lot happens in a much less rehearsed and prepared way than you can imagine.”

Thinking back over those NYE events, he points to the one after 9/11 as being a moment to remember.  “But every year, I find it really moving to be there on New Year’s Eve with all those people who come and brave the elements. It’s really special. Everyone should do it at least once in their lifetime.”

Adds Christie Lites’ Rep Chris McMeen, “This is a most watched event with over a billion viewers worldwide, so nothing can go wrong, even though it’s outdoors and the weather can always be a factor. Every year the Times Square organization comes up with something new; we do our best to support and make it happen for them.”

Christie Lites is a full-service entertainment lighting and rigging company with a commitment to providing the best possible customer value through the use of focus, relationships and an efficiently systemized multi-office network. The company has been in business across the US and Canada for more than 25 years and continues to grow and expand organically as opportunities arise.