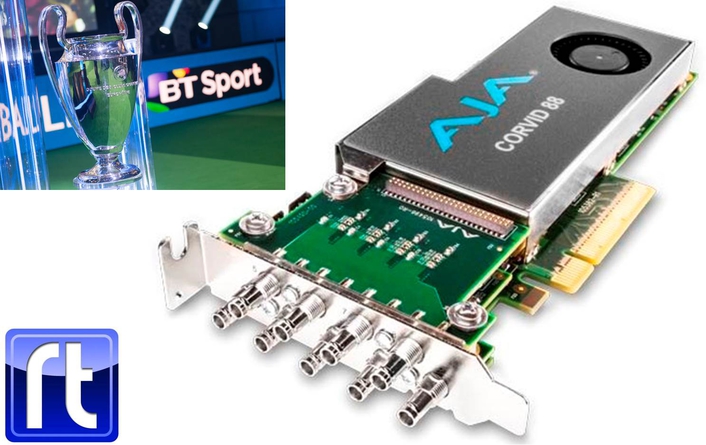 RT Software’s first system to integrate Corvid 88 is a tOG-VR 3D solution currently deployed at BT Sports to facilitate exclusive 4K broadcasts of the 2015/2016 UEFA Champions League season. As part of the launch of BT Sports’ new 4K channel and studio upgrade, RT Software supplied and assisted with the implementation of the augmented reality solution that delivers studio floor graphics during demanding live broadcasts. RT Software integrated Corvid 88 into the live studio workflow to facilitate the real-time render of on-air broadcast graphics. The in-studio setup consists of up to four cameras, each with its own render PC using Corvid cards.

“This is the first time we’ve used AJA cards, and we’ve been really impressed with their reliability,” says Luke Harrison, Technical Product Marketing Manager at RT Software. “We chose to go with Corvid 88 because we needed cards with multi-directional capabilities for configuring video and audio I/O. Our products are operator driven, so the fact that Corvid 88 lets our users monitor graphics at their workstations is great. This last-minute quality check is a huge advantage when it comes to live broadcasts, and BT Sports couldn’t be more satisfied with the results.”

RT Software previewed additional Corvid 88 integration with its range of broadcast graphics solutions during IBC 2015 in Amsterdam. The company also showcased live demos of tOG-Vista, RT Software’s live 4K stitching solution. Announced in June, the system stitches together the output of two 4K cameras, each connected to a Corvid 88 card, to create a single 7680 x 2160 canvas. The resulting footage allows users to generate two HD outputs that are joystick controlled, enabling the operator to use a virtual camera to follow action and zoom in and out. 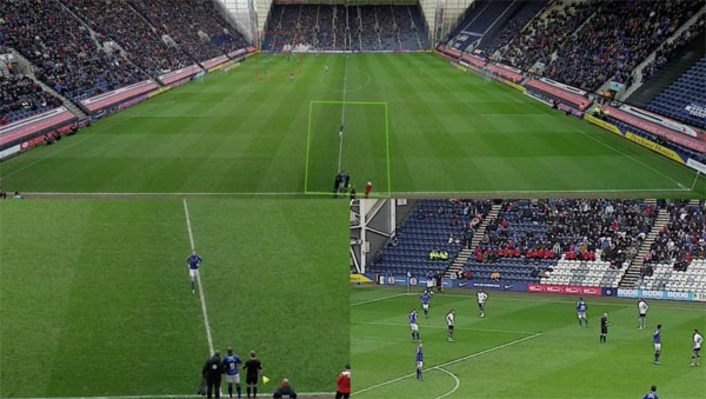 “tOG-Vista is ideal for situations where there is a benefit in capturing the entire game play. Off the ball incidents become a thing of the past, for example, and this innovative technology could even be used to reduce production costs yet improve production values on 2nd tier sports. Corvid 88 facilitates the entire workflow, allowing us to combine the outputs of two 4K cameras,” commented Harrison. “We’ve done a few customer trials, and the feedback has been overwhelmingly positive.”

Harrison concluded: “We’ve been really impressed with Corvid 88 and Io 4K, and we’re looking forward to finding new and innovative ways to integrate AJA technology into our entire line of broadcast graphics solutions in the future.”

About Corvid 88
AJA Developer Partners can maximize video and audio I/O capacity with Corvid 88. Configure each SDI connection individually as input or output and mix formats for up to 8 HD or SD channels on a single card. As demand rises for higher resolutions, combine SDI connections for multiple 4K/UHD channels allowing incredible flexibility and futureproofing with playout and ingest servers or channel-in-a-box systems.

About Io 4K
Io 4K is the next evolution of capture and output hardware offering a full set of professional video and audio connectivity with support for the latest 4K and UltraHD devices and High Frame Rate workflows. The power of Thunderbolt 2 enables Io 4K to handle a wide range of formats from SD to HD, UHD and full 4K over both SDI and HDMI and support 4K frame rates up to 50p/60p.

About RT Software
RT Software is a worldwide leading provider of real time graphics solutions. The product set spans CG, template driven 2D and 3D graphic overlays, election and news room graphics, specialist sports graphics and virtual studios. From its beginnings as an off shoot of the BBC 3D graphics Department in 2004, it now has installs from Iceland to New Zealand and includes the BBC, BT Sport, Fox Sports, NBC, Sky Sports and News in the UK, Australia and NZ along with many other Tier 1 broadcasters in its growing customer base.