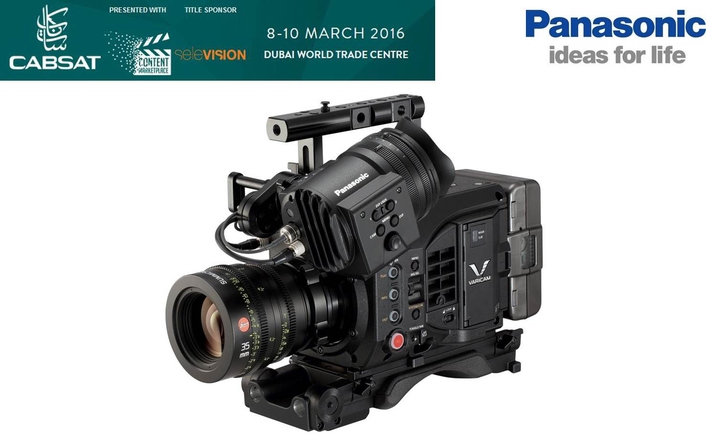 Next generation of 4K Cinema Cameras

Panasonic Marketing Middle East & Africa has unveiled its latest VariCam LT for its first regional appearance at CABSAT being held in Dubai from 8th–10th March 2016. VariCam retains the ability to shoot in both 4K (4096 x 2160) and UHD (3840 x 2160) and features high sensitivity, low noise, wide dynamic range and a cinematic depth of field.

In order to maintain the VariCam 'look', the VariCam LT is equipped with a 35mm single-chip MOS sensor, originally developed for the VariCam 35 and has a same wide dynamic range. This ensures accurate image rendering over the entire image, from dark areas to highlights. This sensor has two native ISO settings of 800 and 5000. Having two dedicated analog circuits means much higher sensitivity without increased noise.

In addition, the VariCam LT offers the ability to change the mount from an EF mount*1 (standard) to a PL mount (optional), increasing the range of usable lenses. The 'V-Gamut' in the VariCam LT gives the camera a wider color gamut than traditional film.

The 'V-Log' gamma curve has evolved further to extend the dynamic range to 14+ stops. Capable of 60fps in 4K, the camera also has a new sensor center crop mode, allowing 240fps for slow motion in both HD and 2K. It is also cost efficient in both operation and workflow due to in-camera color grading, AVC-Ultra codec and multiple recording formats (4K/UHD/2K/HD proxy). The VariCam LT supports both Panasonic and third party viewfinders and comes with a number of optional extras including shoulder mount, grip and PL mount.

The camera is available across GCC from March 2016.

Panasonic’s new 4K ultra-high definition Camcorder WXF990 has made an appearance at CABSAT 2016. Created to match the expectations of discerning customers, the new Camcorder offers best in class quality recordings in a compact package.

The year 2016 marks the second year of Panasonic's consumer 4K camcorders. This model is combined with a wealth of advanced imaging technologies, such as the LEICA DICOMAR Lens, BSI Sensor and Crystal Engine 4K, to produce beautiful 4K images that boast four times the resolution of Full-HD. It is equipped with high-speed, high-precision auto focus technologies to capture sharp, crisp images because focusing is highly critical for 4K shooting.

In addition, by recording in 4K Photo mode, the user can obtain 8-megapixel still images of decisive moments that can't be captured even by the burst shooting of an SLR camera. These 4K technologies are concentrated into a body that is almost as compact and lightweight as Panasonic Full-HD consumer-grade camcorders.

Hitesh Ojha – Deputy General Manager – AV Department, PMMAF commented, “WXF990 is our high-end model packed with advanced functions to satisfy the needs of both professionals and high-amateurs. With the new tilt-able viewfinder, the camcorder makes it easier to capture subjects more precisely.”
“The camcorder comes with a new feature for cinema like effects that allows the use of shooting techniques which are seen in cinemas, such as Slow & Quick Video, Slow Zoom and Dolly Zoom. WXF990 is a compact 4K camcorder which gives a great deal of fun for creating cinema style videos” he added.

TheWXF990 showcases the newly added 4K cropping feature that cuts out Full-HD images from 4K footage using only the camcorder. It allows effects to be added to a recorded video, such as zooming, * panning, * tracking and stabilizing. The edited video is saved in Full-HD format.
* Only two times can be set: Approximately 20 seconds and approximately 40 seconds.

All the new models feature Panasonic’s original Level Shot function, which detects and connects the tilting of captured images. These new camcorders also have the 5-Axis Hybrid O.I.S.+ (Optimal Image Stabilizer); which uses the 5-axis hand detection to prevent hand-shake blur, making it possible to capture crisp, clear images without blurring in almost every shooting situation.

The WXF990 will be available in UAE from April 2016 onwards.

About Panasonic
Panasonic Corporation is a worldwide leader in the development and engineering of electronic technologies and solutions for customers in residential, non-residential, mobility and personal applications. Since its founding in 1918, the company has expanded globally and now operates around 500 consolidated companies worldwide, recording consolidated net sales of 7.74 trillion yen for the year ended March 31, 2014. Committed to pursuing new value through innovation across divisional lines, the company strives to create a better life and a better world for its customers.