Outstanding performances both on stage and backstage
On 10 May, the final of the 59th Eurovision Song Contest was broadcast live to an audience of approximately 125 million in the Eurovision countries and Australia. The world’s biggest live music contest was a fantastic spectacle, with imaginative introductions for each country that competed and many musical highlights among the 26 songs of the final. 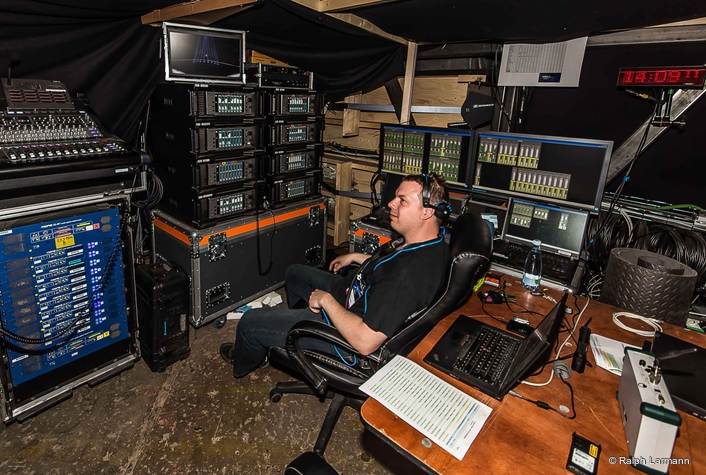 RF expert Jonas Næsby of Sennheiser Nordic with the EM 9046 receivers. On the right: monitors displaying the Wireless Systems

“Join Us” was this year’s motto for the Eurovision Song Contest, which was hosted on Refshaleøen island in the B&W Hallerne, a former shipbuilding hall that was specially converted into a show arena for the contest. With the Eurovision Song Contest 2014, Refshaleøen was transformed into “Eurovision Island“, and played host to a colourful ensemble of artists and ESC fans. However, for the technicians the situation initially looked a little less colourful. Unfortunately, the shipyard proved to be an incredibly difficult environment for all users of RF wireless, not only for wireless microphones and monitoring systems.

Reflections on Eurovision Island
Jonas Næsby, RF specialist with Sennheiser Nordic, was on site for DR to provide assistance to the broadcaster with the microphone and monitoring set-up. “We knew that the available spectrum was very limited as 22 TV channels were already fully occupied. This made frequency planning slighly difficult – especially as wireless mics were not the only devices that needed spectrum,“ explained Jonas Næsby. “However, the biggest challenge we faced was unquestionably the hall itself.”

Both the walls and roof of the huge shipyard are made of metal – as were the stands that were specially erected for the audience of 12,000. The floor is made up of heavily reinforced concrete and this proved to be considerably more critical than that of standard venues. “Never before have I encountered such a huge amount of reflections and if somebody had told me that they knew of an arena that could affect RF transmission this much then I would never have believed it prior to this experience,“ continued Jonas Næsby. 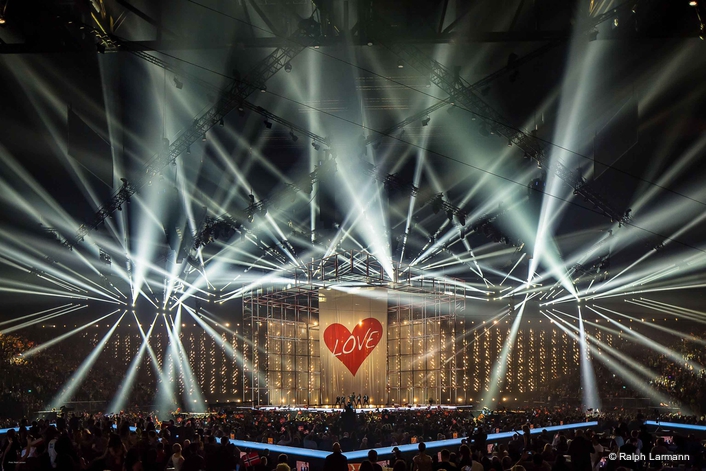 With a length of approximately 175 metres and a height of 70 metres, the metal hall caused reflections that partially ran over 300 metres and then hit the receiving antennas with a considerable delay as compared to the direct signal. However, the usual amount of damping did not occur: the indirect signals had much higher signal strengths than typically encountered in music venues. This phenomenon was caused by the metal walls and ceiling, which formed corner reflectors and boosted the signal by in-phase additions. 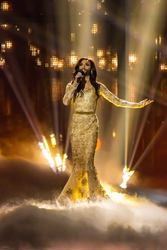 The wireless technology also had to battle with the general frequency situation in Denmark and nearby Sweden: “Unfortunately, having a lot of reflections within the hall does not automatically mean that your hall is entirely shielded against the outside,” explained Jonas Næsby. It proved to be quite the opposite as there were enough gaps and also wooden elements to let RF in – with some frequencies more intense than others. “As an example, in addition to the 22 fully occupied TV channels that we had to cope with, there was a relatively wide and loud test signal that appeared out of nowhere at irregular intervals and would then disappear. In total, we co-ordinated some 150 microphone and in-ear frequencies, around 100 of which were used for the actual TV show production. The remainder were used at the VIP area, the press centre and so on. If the Digital Dividend II had already been in place, we would definitely not have had sufficient spectrum.”

Special solutions for the shipyard
“We had pretty much optimised everything that was there to be optimised: the fine-tuning of the Digital 9000 system, the antenna positions, everything. And of course conditions improved a bit when the audience was in place,” continued Næsby. “In addition, we had also adapted the digital signal processing of the system which meant that even signals that arrived at the receiver extremely late and with high signal strengths were correctly combined with the RF signal that had arrived earlier. This meant that the Digital 9000 firmware was able to detect such critical instances and could cope with such extremely rare problems. This could not have been achieved with an analogue system and in fact would neither be possible with just any digital system.” 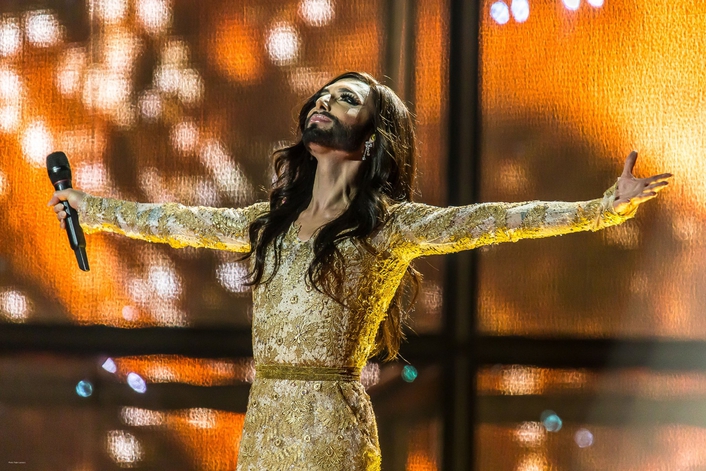 Backed by this technical expertise, all three ESC shows went off without a hitch, exactly like in previous years. And in the grand finale, Conchita Wurst, aka Tom Neuwirth, impressed both the judges and audiences with her Bond-esque “Rise like a Phoenix” and won the contest with 290 points. The runners-up were The Common Linnets from the Netherlands with 238 points and Sanna Nielsen from Sweden (218 points). ESC fans are now eagerly looking forward to a great contest next year in Austria!