Moving to a new, modernized stadium is not a straightforward undertaking, as anyone who’s ever made this move will tell you. The only thing that’s more complicated may just be staying in an old one. Ever since the Olympique Lyonnais club was officially established in 1950, its home was the playing field of Stade de Gerland, which is now more than 100 years old. Rich in historic architecture, the stadium had to undergo multiple incarnations to accommodate various seating formations and FIFA regulations. Through periods of construction and renovation, it ultimately reached a maximum capacity of 43,000.

With each season that passed, though, the team’s league championships kept mounting—including a national record-setting streak of seven successive titles—and the crowds just kept growing.

It was 2005, and the men’s team was three years into its championship streak. With the stadium at maximum seating capacity, the club’s ownership had to find a new way to reach more fans—beyond the seats and beyond the live matches.

Already, the club’s production company, OL Images, was responsible for creating all visual branding for the team, and producing the graphics and videos used for marketing the team and its matches. So in July of 2005, OL Image took its video production game to the next level, and launched the team’s television channel: OLTV.

Technical Manager for OL Images Nicolas Houël has been with the production company since the launch of the OLTV channel. “Since then, I’ve had technical responsibility for the audiovisual infrastructure at Olympique Lyonnais,” he says.

At that point, just like nearly everyone else producing broadcast-worthy programs, OLTV was capturing and delivering SD video for their shows.

Today the channel broadcasts all OL games (rights-delayed) as well as hundreds of magazine programs, game commentary and analysis, interviews, retrospectives, and other regularly scheduled shows that make up its 24-hour programming schedule. And in parallel, video technology has become increasingly sophisticated. 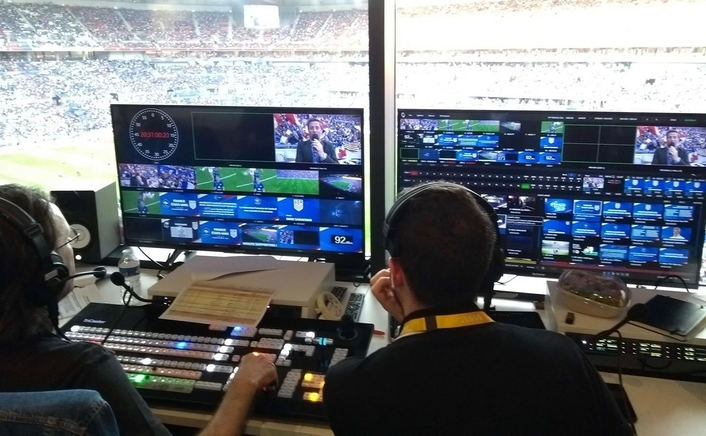 “For a long time I have followed the progression of TriCaster mixers,” he says. “The first analog-only model (TriCaster PRO, introduced by NewTek in 2006) I liked because of its ergonomics and operating philosophy.”

At that time, he already saw the resource efficiencies he could achieve with TriCaster, by integrating multiple control-room operations into one system. However, at that time, most of the broadcasting world demanded conventional hardware switchers for the real-time tasks that TriCaster was performing in software.

Then as technology progressed, the TriCaster line had evolved from its original model, now incorporating sophisticated automation protocols and video formats standard in broadcast and professional AV.

“When SDI and HD video formats were added, I knew the TriCaster solutions would have a big impact on the market,” Nicolas says. “And then, during discussions with our AV integrator partner VIDELIO-IEC, when I discovered they were recommending TriCaster, I was reassured.”

Ultimately OL Images decided that TriCaster would be a key part of the future of the team’s video production—and a short time later, it played an influential role in OL’s most ambitious expansion yet. 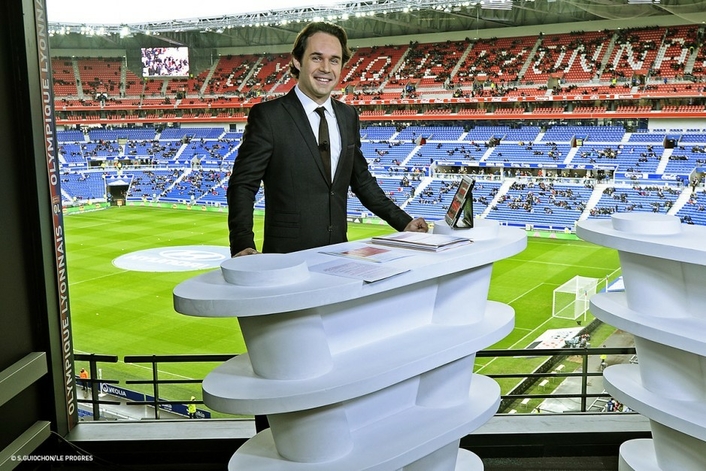 Pitch view inside the studio at Parc Olympique Lyonnais

Inside Parc Olympique Lyonnais also known as Groupama Stadium. “Our president studied what was working best in Europe, and understood that a modern stadium was necessary, in order to welcome spectators the way we wanted to, and then to offer them a quality product.”

Along with the team moved an entirely HD-upgraded audiovisual infrastructure—plus 2x85 square meters of giant LED screens, OLTV broadcasting studios, multiple editing rooms, and what Houël calls an “exploded grid” of IT connectivity, tying the giant expanse of stadium together in a future-proof, interconnected network.

“Arriving in this new stadium, we changed universes,” Nicolas says. “We went from a historic municipal stadium in the city, run by the municipality, to an ultra-modern and ‘connected’ stadium that is owned by the club.”

The new venue, known as Groupama Stadium, fulfills the vision of OL Group president, Jean-Michel Aulas. “The ambition of the club is to grow, to be a big club,” says Nicolas. “Our president studied what was working best in Europe, and understood that a modern stadium was necessary, in order to welcome spectators the way we wanted to, and then to offer them a quality product.” And indeed, it did grow—the new arena was built for the large (and noisy) crowds the OL teams have come to attract, with room for 59,186 attendees in its stands.

Even the stadium’s architecture was designed to promote the team’s notoriously loud spectators. Its structure facilitates the OL fans’ tradition of singing to each other across the pitch, resulting in “a cacophony of noise and support,” according to its architect.

Of course, delivering victories and championships to fans is the job of the 11 players on the pitch at any given time.

But to deliver a truly inspiring experience that welcomes spectators in, keeps them engaged, and entices them to come back again and again, OL Images knew it would take something spectacular. 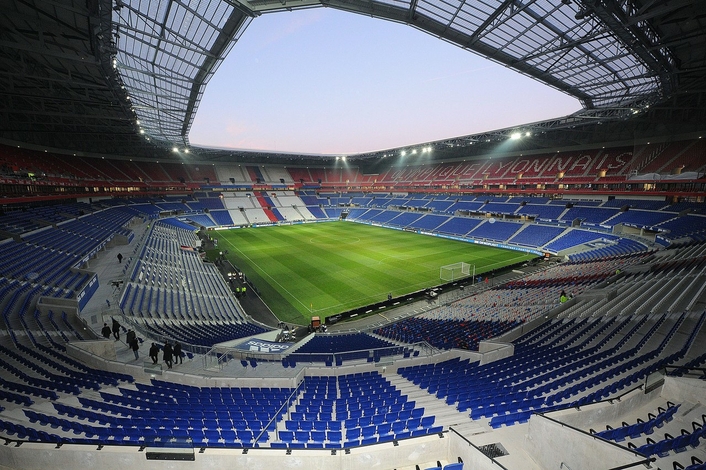 “Moving a facility like ours is not straightforward, but it’s even more complex when you also have to migrate the TV channel,” says Nicolas Houël.

The first challenge was to transition from SD to HD, along with converting the majority of OL Images’ archives to adapt.

The second was for the stadium architects to understand the challenges of designing for future-proof broadcast and video requirements.

“We wanted to build an interconnecting ecosystem,” Nicolas says. “New IP technologies have enabled us to take advantage of new functions, giving us the ability to identify a signal in one location and use it in several places.”

That meant accommodating a variety of audiovisual, traditional SDI, Wi-Fi, and Ethernet connectivity to equipment, displays and endpoints everywhere across the stadium’s 53,700 square foot area.

“At Groupama Stadium, we have not merely a single video control room, but anywhere from 4 to 6 production rooms,” explains Nicolas Houël.

These currently include studios for OLTV and its television productions; for managing scoreboard display operation; a fully equipped auditorium; and, of course, for OL Images game-time production of mixing the graphics and visuals for the giant screens. Two additional facilities are also part of the plan, to manage both the video room for “Pro Days” player events and the press conference room.

“Because of this, it was necessary to study each particular use case while thinking about the connectivity of equipment and signals,” Nicolas says. Like the club’s president, he and his colleagues are deeply focused on the ‘fan experience’ and strive to ensure that the quality of production exceeds the norm. 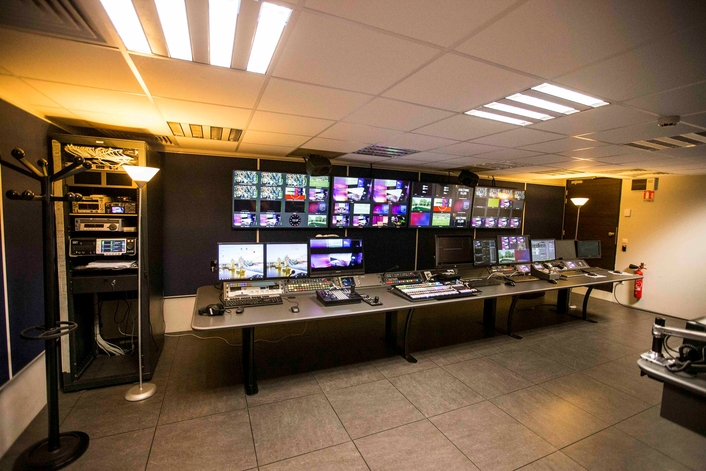 TriCaster TC1 production system gives OL Images and all stadium productions the wide-open canvas to connect up to 16 external inputs—even future-proofing the stadium for expansion up to 4K ultra HD.

The technical team redesigned the way giant LED screens are used, to produce a program completely dedicated to quality for the viewer—and the result is a multimedia feast for guests of the venue featuring sound, visuals, and light.

Yes, even light: as part of the new stadium experience, OL Images orchestrates a sophisticated light show for pre-game and halftime, integrating pitch and grandstand lighting composed of hundreds of LED fixtures, projectors and floodlights—all coordinated to animate simultaneously with the giant LED screen show.

Nicolas Houël says, “We treat our pre-game experience as the production of a dramatic TV show, with a tape operator, a lighting tech, a sound engineer, a director, a script, an announcer…” whatever it takes to create an experience that up to 59,186 fans would never forget.

So on opening day of Groupama Stadium in January 2016, while the OL athletes took their game to the field, the OL Images team took their production to the screens using a TriCaster TC1.

The way OL Images programs are produced, Houël says, a single program may include video from several control rooms. Conversely, a single camera may be used by several places.

“Using a traditional solution, we would have had to install mixers, video players, title generators, etc., possibly in multiple locations,” Nicolas says. “The alternative was to consolidate the sources from all the rooms into an integrated, all-in-one solution, which is what NewTek has developed with TriCaster using IP video.”

Initially, the stadium had a TriCaster 410 installed when it was first opened to the club. With 4 physical inputs, however, the TriCaster 410 wasn’t meant to handle the elaborate in-stadium productions OL Images had in mind. “We needed a much higher production value, and we found it in the TriCaster TC1. After much experimentation and investigation, we were convinced of the reliability of these machines and the decision was made very quickly,” he says. 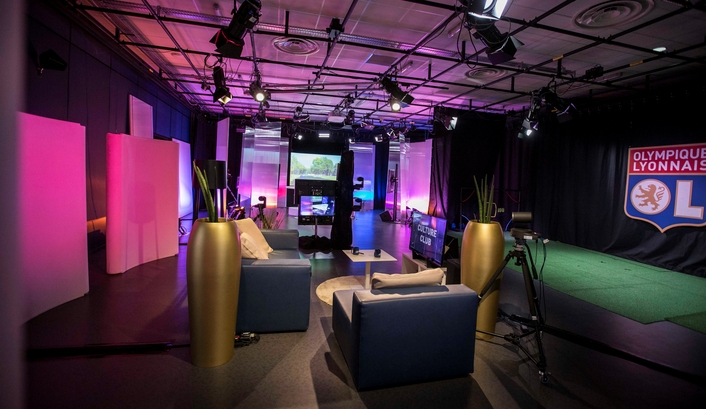 Indoor studio set, one of many used by OL Image to create the ultimate fan experience at Parc Olympique Lyonnais

The TriCaster TC1 production system gives OL Images and all stadium productions the wide-open canvas to connect up to 16 external inputs—even future-proofing the stadium for expansion up to 4K ultra HD.

More importantly, as a single, integrated system, it can address all the production use cases throughout Groupama Stadium’s infrastructure. From taking in a camera or two from the press room, to feeding the big display in the Fan Zone outside the stadium, to broadcasting to more than 300 IPTVs installed throughout the facility, OL Images can adapt the TC1 for the diverse AV needs they have every day.

And that’s in addition to its primary game-day application—coordinating the dazzling, live visual effects that feed the giant LED screens to fans in the grandstands.

Connecting to the Future

Even more compelling to Nicolas Houël is the TriCaster TC1’s implementation of NDI®—NewTek’s IP video technology that allows OL Images the flexibility to keep all their options open when it comes to connecting devices throughout the stadium, increasingly enabling them to use IP for more and more functions.

“Using IP makes it easy to deploy more sources linked over the network with the mixer,” says Nicolas. “In addition, in this infrastructure, using NDI for IP source I/O allows us to keep physical inputs free for additional hardware connections.”

The group uses MIDI controls to trigger LED lighting effects from the 3DStorm’s DELTA-Stadium device from LiveXpert, and NDI to input the broadcast animations which are then fed into the giant LED screens from the TC1.

Today, that freedom is giving OL Images greater graphics capability during their pre-match and halftime extravaganzas.

And as they move into the future with their new, “connected stadium” configuration, Houël says they are looking at ways to connect more devices over the network—with the potential for a device located anywhere in the 50-hectare complex sending a signal to a control room on the opposite side without moving any equipment.

“Now, the integration of NDI allows us to glimpse new perspectives on the possibilities we can achieve with future productions,” he says—and help their fan engagement to continue growing, along with the growing popularity of the team.